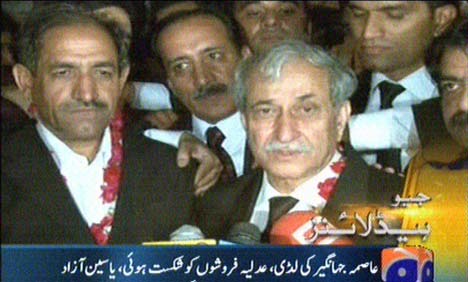 LUBP felicitates Yaseen Azad on his election as President of the Supreme Court Bar Association (SCBA).

The victory of Mr. Azad is a manifestation of the confidence reposed by the country’s legal fraternity in his professional and leadership abilities as well as trust in progressive politics.

Hamid Khan-led Professional Group is known for having direct links with Chief Justice Iftikhar Chaudhry and associates (Justice Sharif, Justice Ramday etc); the group also enjoys support of right wing lawyers including those who had showered rose petals on Mumtaz Qadri, the self confessed killer of Governor Salmaan Taseer .

Many judges of Supreme Court and LHC were tactfully busy canvassing for Rizvi. For example, the Chief Justice of Pakistan addressed the lawyers function arranged by the Lahore High Court Bar Association, led by Asghar Ali Gill to show his support. The event was seen as a campaign event for Rizvi (Source)

Before the elections, Rizvi had reiterated the old pro-judiciary policy of his group saying that upon winning the polls he will raise a voice for implementation of the judiciary’s judgment and verdicts. He said “it is the SCBA’s duty, being the highest bar of the country, to put due pressure on the government if it showed reluctance in obeying judicial orders. He criticised current SCBA president Asma Jahangir who allegedly backed the government against the judiciary when a clash arose between the two on the implementation of court judgment in corruption cases including NRO and the reopening of the Swiss accounts case.” (Source)

However, according to Azad, Rizvi falsely claimed that he had refused to take an oath under PCO. “I have seen the notification and Rizvi wasn’t even on the list of the judges asked to take oath,” Azad said. (Source)

The significance of the SCBA election saw a major increase particularly after the lawyers’ movement as a result of which the lawyers emerged as a strong pressure group in the country’s political arena. The PML-N + Iftikhar Chaudhry group wanted to help elect an SCBA president who would pressurize the democratic government in tandem with certain institutions (judiciary, ISI etc) through selective and lopsided justice (e.g., the NRO cases).

Talking to media, Yaseen Azad said those who were doing business in the name of justice have faced defeat today. 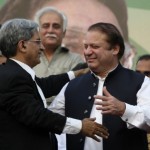 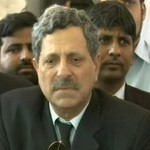 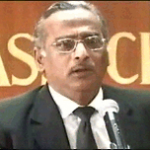 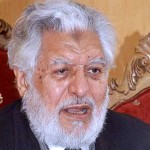