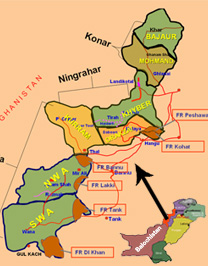 Kurram is a mixed Shia-Sunni agency in FATA. Despite occasional Shia-Sunni clashes, Kurram remained by and large a peaceful part of the British India state and later its successor, the Pakistani state. There are mainly two reasons for that. One, the state — British and Pakistani — never allowed individual Sunnis or Shias or their groups to spread large-scale violence. Before the start of clashes or in the initial hours or days of the clashes, the state would strictly enforce its writ on both sides against those who had taken up weapons for sectarian or land and water disputes. This would immediately eliminate the threat to peace and tranquillity in the area.

Two, both Sunni and Shia tribals used to follow the tribal code of Pakhtunwali, which dictates that there shall be no attacks on women, children and generally all innocent people, including men. There were religious forces in Kurram, but they were weak and the religious forces also conducted themselves according to the dictates of Pakhtunwali rather than the dictates of their religious ideologies. Thus the religious forces, Sunnis or Shias, never became a problem for the larger society in Kurram. The result was that there was widespread peace, tolerance and sectarian harmony in the area. Any large-scale human displacement was an alien idea for the people of Kurram Agency.

Kurram, and especially its capital Parachinar, has been a successfully functioning tolerant and plural society where tribal Pakhtuns, minority Punjabi settlers, Muslims, the majority Shia and minority Sunni and non-Muslim minorities, Christian and Hindus lived in peace. It is a fact that the majority Shia Toori tribe of the city has great contributions in evolving Parachinar and its surrounding areas into a tolerant society where people with different ethnic and religious backgrounds could live and prosper in peace.

In the context of two big international events, the revolution in Iran and the Soviet invasion of Afghanistan, and the response of the Pakistani state to these events, led to the erstwhile weak religious forces to begin to entrench their power. The state began to empower the clergy and religious militant groups for foreign strategic objectives in Afghanistan and Kashmir in the form of violent jihad. The state-sponsored Sunni religious groups nurtured them and FATA people, like people elsewhere in Pakistan, were recruited into them. In response, Shia extremist groups emerged in Pakistan. Through deliberate state policy, religious groups were empowered and strengthened and elevated in wealth, weapons and power in Pakistan. Both Shia and Sunni extremist groups from across Pakistan reached out to like-minded people in Kurram to recruit foot soldiers from and establish jihadi training centres in the Agency. The Kurram-based religious forces that were weak before and subservient to Pakhtunwali gradually became empowered and no more considered themselves subject to Pakhtunwali.

The religious forces, unlike those who uphold Pakhtunwali, do not prioritise the interests of the local tribals at the cost of their international and regional political and ideological goals. So, it does not matter much for the religious forces, Shia or Sunni, if Kurram is burning and bathed in blood every single day as a consequence of their activities.

In a lot of international and Pakistani scholarly and journalistic literature it is said that the people of FATA are fiercely autonomous. This is far from the truth. They may be autonomous in some areas, but certainly not autonomous in everything, especially in matters seen as national interests by the powerful military establishment of Pakistan. If the tribal people had been as autonomous as documented in international research and journalistic literature, they would have stopped the Pakistani state from using their homeland as a strategic space for foreign policy objectives carried forward through religious militant groups. But the experiences from one end of FATA to the other, in the context of the war on terror, shows that we FATA tribes are neither autonomous nor fiercely independent. They are subjected to the will and control of the Pakistani state, even if this means shedding of innocent blood in the area every single day in pursuit of the state’s foreign policy objectives.

It is in this state-imposed context that the people in Kurram, like elsewhere in FATA, could not do much to stop the jihadi activities on their soil. The state encouraged religious bigotry and damaged the sectarian harmony in Kurram. The progressive, secular and Pakhtun nationalist forces of Kurram seemed to have been overwhelmed by the rising tide of religious extremism backed by the state. It is not uncommon to find people in Kurram who regret having done nothing to stop the gradual slippage of this Agency into the hands of Shia and Sunni jihadi groups. Commenting on this situation, a Sunni Kurram tribal leader said, “Many people, both Shia and Sunni, in Kurram are pro-socialism, secular and nationalist in outlook. But I regret to say that we did nothing to save our Kurram from slipping into the state-nurtured religious quagmire since the 1980s. We were nothing in terms of resources for the state and non-state powers behind the religious groups, but we could have given an alternative vision to our young generation. But we failed to give that alternative. Secular and progressive Shias and Sunnis from Kurram are responsible for this lethal inaction that ultimately contributed to the current vicious circle of death and destruction in Kurram that we see today.”

Nevertheless, Kurram remained largely peace until 2007 despite the fact that several other parts of FATA were devastated by terrorism since 9/11. The deadliest sectarian clashes in Kurram began in 2007 when the state withdrew its writ from the area, leaving space for Shia and Sunni militant groups, both local as well as outsiders, to unleash death and destruction in the Agency as part of the state’s strategic games vis-à-vis the US and NATO forces in Afghanistan. The clashes have killed over 3,000 tribesmen, women and children, and have caused a mass scale Sunni displacement from Shia majority areas and Shia displacement from Sunni majority areas of the Agency.