The national media in Pakistan has become too sordid and boring despite the freedom it had to turn itself into credibility amongst its audience; apparently it has lost it. Because people like me no more watch the talk shows once we were addicted to. The articles in newspapers are of unlimited repetition and pretension. On the other hand is the international media relentless in portraying a negative image of Pakistan and trying to prove Pakistan as a terrorist country.

Amidst these journos who are dupes of their corporate bosses; one looks towards the alternate media to get a flavor of news and views that others would wish to see buried. Because alternative media has to afflict the comfortable; which mainstream media has failed to do so. But in Pakistan so much is the bonding between the so called elite of journos that if one biting truth comes from somewhere they all gang up. One such rather unfortunate happening for alternative journalism recently happened when a free writer expressed her views and substantiated it with an interview on Najam Sethi in LUBP. It created such vehemence amongst either the najam-sethi-fan-club-journos or perhaps they wanted to prevent this before it could be their turn. They have not only  accused the writer (Laibaah) of ‘dishonesty’ but a very young journalist went to the extent of calling it as ‘vested interests’ and ‘crooked’ designs. The notable journos (evidently Sethi’s friends or fearful of the same coming to them) pressurized LUBP to apologize. Interestingly LUBP went ahead by publishing a post using those rather baseless comments. This is not simply disagreeing, it is sheer harassment of an independent forum of writers and blogs. 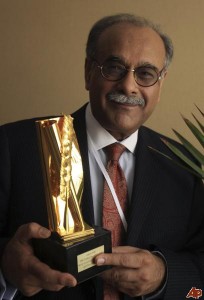 This brings me to discuss three issues “freedom of speech”, “Independent alternative journalism” and thirdly “anonymity of the writer Vs the privileged and arrogant known”

Free speech in fact was the publication of posts by LUBP such as the one on Sethi and free speech is the comments on these posts which LUBP (and we respect LUBP for it) doesn’t censor or modify. Curtailing free speech is asking for apologies from LUBP and curtailing free speech is changing some baseless comments into a post. Unfortunately LUBP unknowingly did both it not only curtailed free speech by coming under the pressure of the task masters it also has been apologetic by giving such coverage (A Post) to  comments that were nothing but scratching Sethi’s back. Secondly it encourages the group that considers them and only themselves right and want dissenting views to be killed. LUBP made their day by publishing this post of “LUBP should not be maligning Najam Sethi”.

Independent alternative journalism (alternative journalism is nevertheless independent, independent word is being used to send a message) much needed in pakistan as the mainstream journos also have their selective targets and won’t openly crtisize the media for its partisan role. This is because the journos themselves are partisan one way or the other. Fair enough but then they don’t have the right to tread on the toes of a forum that supports and believes in certain issues and has reservations on the role of certain journos. Alternative journalism actually EXPOSES and it is always PROVOCATIVE and once it does, it is its responsibility to stand by it and not give into pressure; because if it does than it is no more independent.

Chronicling the ideas and views of certain personalities who have changed over times or pretend to be what they are not; is actually exposing them and can be very provocative; this is what the post on Najam Sethi did.  But the apology of LUBP makes it cut a sorry figure for what it believes in and pushes it in the amidst the very toothless mainstream Pakistani media when it comes to bringing journalists and media accountable.  And we all know that the quality of information in comments is usually zero, therefore LUBP should have invited the critics to write instead of giving them the privilege of changing their comments that lacked substance into a post. The commentators on Najam Sethi post suffer from sheer arrogance as they don’t know that the business of alternative journalism is about combining non-fiction  with fiction writing; it’s about exposing and provoking.

The LUBP team would know how the muckraking movement was killed and one reason was softening their stance. What LUBP needs to look into is, is it an alternative platform of journalism or not? if it is then it has to maintain its editorial ideology and has to continue to be robust without compromising; otherwise it will lose its credibility in the eyes of those that seek alternative journalism although by being apologetic it can gain credibility amongst those don’t want alternative journalism to look in their eye. The very history of this medium shows tough resilience in the face of pressures of all sorts. So LUBP if it wants to live as a forum of alternative journalism has to revisit its strategy and editorial ideology.

Lastly is the issue of anonymity; this is about the strong and bold voices without faces and with pen names. The mainstream journos are in a sheer superiority complex for having a face and id to their writings and blogs and very obviously look down upon those who for reasons which can be very well understood don’t. It is a basic freedom to be who you want to be on the net; this is understood because anonymity is also an established part of many cultures…for good reason.

Even famous authors throughout the centuries have used pen names:

And many writers today use pen names. Why pen names are used is for a wide variety of reasons, which includes to remain anonymous if producing a politically or religiously sensitive work. However it draws criticism as people want to uncover who is behind the pen name and don’t want that voice which in many instances is stronger than theirs to be heard. Many people do charity work without revealing the identity and many do human rights work without revealing identity many have concerns for their own or their families safety due to their involvement in some movement and from fear of reprisal.

This has to be understood in  a country where there is always a fear that the big brother is watching you and even phones are tapped.  Very unfortunately mature and immature journos and even others don’t understand this perhaps purposefully. All they are concerned about is the ‘name’ they want to recognize with.  The concern is blown out of proportion and becomes so big that the Voice and the Issue that has been voiced by the pen name is not paid any heed to. This in itself is ignorance when there is so much to be learnt from those using pen names. We fairly have to give these voices their due share in writing about hidden issues and personalities, if we don’t agree that is fine but blaming them as vested interests, and dishonest is shameful. We also need to encourage the alternative media to be independent and not pressurize and intimidate it to apologize (sounds  dictatorial doesn’t it coming from the champions of democracy).