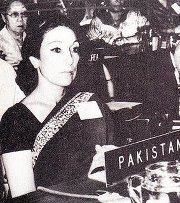 When one glances into the record of Pakistan Peoples Party, one will stumble on it. It is a long history of struggle and sacrifices. No doubt unfolding them is not even that unproblematic, but it necessitates a lot of audacity as the heart melts to see all, that the party, its workers and its leadership faced from the very first day. While thinking of the individual hardships, the part of Mohtarmah Nusrat Bhutto Ispahani stand out most prominently. Rolling back the pages of PPP’s history, one will find her manifest part in Pakistani politics. Right from the founding of the Party, she struggled against the Martial Law of Ayub Khan and further more, it was the same lady, who played a great part in the reinstatement of egalitarianism in Pakistan, following zia’s regime.

Indeed, the Pakistani nation owes a lot to the great woman of substance Mohtarmah Nusrat Bhutto, who, from the very beginning bore great hardship for the cause of a Pakistan, where there was a self-ruled Government, a Pakistan, free from unawareness and ailments, a Pakistan, where women were given respect, a Pakistan, where the dejected ones got justice, a Pakistan, where everyone had the basic facilities of life and a Pakistan, where Bread, Clothing and Shelter were accessible to all. Certainly, the same Pakistan – The same kind of Pakistan was the apparition of our Quaid e Awam – our Party’s founder Shaheed Zulfiqar Ali Bhutto and yes!! One cannot refute this verity too that accomplishing this vision requires an extra deal of resistance to every sort of snag. The way, leading to the purpose of a flourishing Pakistan is not an easy one. This path is filled with difficulties and giving up means giving up every hope for a vivid future for the Country.

The world cannot forget the great instant of November 30, 1967, when the party was formed for the poor and common people of Pakistan, providing a prospect for all to gather under the flag of PAKISTAN PEOPLES PARTY. The underpinnings were not easy. The leadership suffered a lot in the preliminary stages, but God helps those, who help themselves and He always supports those who are on the right path. The Party succeeded in putting an end to the authoritarianism of Ayub Khan and after the massive triumph of PPP in the upcoming elections, the PPP got an opportunity to build Pakistan into one of the strongest nations of the world. That is easily said but democracy has always faced stern challenges in Pakistan and the government of Shaheed Zulfikar Ali Bhutto faced a major obstacle in the person of zia ul haq, who not only threw out an elected Government, but also snatched from the world, a gleaming leader – The tiger of Asia , Shaheed Zulfiqar Ali Bhutto – “The LEADER of the PEOPLE”.

That April 4 , 1979 transformed the political phase of Pakistan and from there followed great decades of sufferings and catastrophes for the Iron lady of Pakistan Nusrat Bhutto Ispahani , who first, lost her husband, while struggling for Pakistan and thereafter, fighting for righteousness – that woman, that wife, wasn’t even permitted to see her martyred husband at the last moments. It was the same lady, who valiantly fought for the revival of democracy, along with her young daughter Benazir Bhutto. The trail, leading to this goal was filled with blood. Even women were beaten mercilessly on the thoroughfares under the instructions of the so called President , General zia ul haq – Is this called his so- called Islamisation that against the verdicts of Islam, women were desecrated? But at last, a point came, when the soldiers refused to accept his orders, and instead, paid acknowledgment to the greatness of those women, who were struggling for their nation. What could be a larger blight for those autocrats than this…???

It was the same audacious woman, who lost her young sons, Shahnawaz and Murtaza. The rationale, well known to everybody was that democratic system was intolerable for the establishment of Pakistan, which when found no other way to smother it went on adding blood to the Bhutto inheritance – to the bequest of the Pakistan Peoples Party. Later, the PML-N Government, lead by Nawaz Sharif left no effort to adding on her encumbers. False cases of corruption were instituted against her. These days, this lady was a victim of a stroke and Alzheimer’s disease. That mother, who after losing two young sons even lost her beloved Benazir – her Pinky, but was oblivious that she, now dwells under the soil of Garhi Khuda Bux Bhutto.

This day, my empathy cracks into trillions to say that March 23, 1929 gave birth to a woman, merely for facing hardships, losing all her adored ones, but undeniably, she is a LIVING MARTYR and I behold that if anyone covets to see a martyr on the surface of Earth in this present world, let him gaze at Nusrat Bhutto, who has lost all – lost her everything for Pakistan.

Your struggle & sacrifices would always remain a golden part of PPP’s History of Blood!