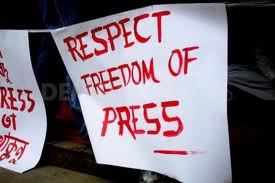 A British regularity body that is partly funded by the British government has ruled that a popular English language international news TV network with millions of viewers be taken off the broadcasting platform. In other words Press TV is banned in the United Kingdom.

Apparently the British government is not happy with Press TV. It was confirmed by WikiLeaks in one of its leaked reports, which revealed Britain had informed the United States that London was seeking ways to restrict Press TV’s UK operations.

The National Westminster (NatWest), a leading British bank, has already frozen Press TV’s bank accounts without a court order and without giving any reason. Journalists working for Press TV are followed and Press TV is depicted as a ‘domestic enemy’ in the British media. Not many civil liberty groups or British politicians have voiced their concern over the harassment of Press TV staff .

All British governments have been preaching press freedoms abroad and portray Britain as a beacon of freedom and democracy but, actually, they are not tolerant of alternative news sources, particularly TV channels operating in the United Kingdom.

Press TV is an Iranian TV channel with operations around the world, including offices and studios in London where Press TV is registered as a British company. It was launched in 2007 and so far has succeeded gaining significant viewership in Britain. Leading British figures including firebrand politician George Galloway, former mayor of London Ken Livingstone and journalist such as Yvonne Ridley as well as many other reporters and commentators have been working for Press TV.

Unlike other British television channels, Press TV London journalists and program hosts have been very critical of the government policies and actions. For example, Press TV highlighted the British police brutality during student protests in London. Also Press TV provided its audience with real reasons behind the August 2011 riots when poor and unemployed teenagers agitated across Britain.

Similarly while the BBC launched a marathon transmission to broadcast the wedding of Prince William with Catherine Middleton in April 2011, Press TV was critical of the royal wedding extravaganza and informed its audience how the public money was spent on the event as the country was in the middle of an economic crisis.

Besides, Press TV presents a different perspective of the situation in the Middle East and dissects Western policies. Perhaps because of Press TV such policies Office of Communication (Ofcom), the independent regulator and competition authority for the UK communications industries, has been finding an excuse to take Press TV off air.

First, Ofcom accused Press TV for violating rules when Press TV broadcast a 10 second clip of an interview with an Iranian dissident in a Tehran prison. But those charges were not strong enough to axe Press TV transmission from London.

Ofcom’s second charge against Press TV is that Tehran has editorial control over Press TV London news and program content. It is a ridiculous charge as all international TV networks have one or two main bases. For example, the BBC is headquartered in London where its main editorial rooms are located. Al-Jazeera has its main editorial base in Qatar and so on. Main offices of Press TV are in Iran but journalists at Press TV London have been working independently. Guests at Press TV London shows come from across the British political spectrum. They include politicians from the left and right and personalities representing different faiths.

However, like all other news organizations, Press TV has an editorial line and its news agenda is different. One can disagree with Press TV editorial policy and criticize its programs but silencing a media outlet that doesn’t toe the establishment’s line is outrageous in a country that takes pride in showcasing British press freedom.

Another argument to justify banning Press TV is that since Tehran does not allow the Western media to operate independently in Iran and the BBC has been facing difficulties in Iran, why Press TV should enjoy freedom in Britain? It is a valid argument but then Britain, the EU or the U.S. should not criticize Iran for curbing freedom of the press. Besides, the British government will have to prove why it  plans to deprive a large section of the British public of their favourite TV channel by banning Press TV.

In fact the media regulator, Ofcom, is not independent of the British government. It is partly funded by administrative charges levied on designated providers of electronic communications networks and services and by broadcasting license fees and a big chunk of its incomes is grant-in-aid from the British government. Many senior Ofcom members are actually former executives of the BBC who see Press TV as a rival news organization gaining popularity in Britain.

In Britain the most influential broadcasting platform is the Sky network that is owned by Rupert Murdoch’s News Corporation. Mr. Murdoch is an Australian-American media mogul with Jewish roots. He owns more than 800 national and transnational media companies all over the world that includes Sky TV, Fox TV and Fox film company, newspapers such as the Times of London, the Sun and many other world titles. Recently Murdoch was under police investigation for one of his newspapers, ‘News of the World’, involvement in a telephone hacking scandal and wide-scale corruption.

Murdoch’s Sky network is almost the only broadcasting platform for the alternative media. Non-UK TV channels can operate on the Sky platform but first they should be approved by the Sky, and then be regulated by Ofcom during their entire operation. A custom dish set-up is not an option for many British consumers and therefore alternative news outlets have to agree to broadcast on the Sky to attract British audience and work within its imposed frameworks.

British journalists as well as political and civil rights activist fought a long war for freedom of the press, but despite the long historical struggle the state of press freedom and civil liberties is not ideal in Britain. Freedoms are highly channelized and remain under the close watch of the British state authorities.

Max Rowlands in his analysis of media freedoms in the UK and police powers has listed several incidents where the police misused their powers. For example, in July 2008, a man taking pictures of emergency service vehicles attending a fire at his local cricket club was ordered to stop doing so on grounds of “national security”.  In the same month in Hampshire, a man was confronted by police when they saw him taking a picture of their car illegally parked at a bus stop. He was told that he was being questioned under the Terrorism Act 2000 and forced to give them his full details which they said would be kept on file for a year.  In February 2008, a PCSO ordered an amateur photographer, who was taking landscape shots to submit to a Blackpool council photography competition, to delete all photos in which they appeared in the background.

YouTube also features a number of videos in which individuals have been told to stop filming by police for spurious reasons. In one instance two police officers told a man standing in his own garden that he was committing a criminal offence by filming them.

Amid eroding press freedoms one can only hope that the decision by Ofcom to ban Press TV will be reversed because banning a TV network will further tarnished British reputation, which is sad.

Shiraz Paracha is a journalist and analyst. He can be reached at:  shiraz_paracha@hotmail.com

Click here to post a comment
Shadows of Endless Nights – by Ayesha N. Rashid
On LUBP’s apology to Najam Sethi club: Why can’t we respect free speech even if we disagree? – by Salma Jafar