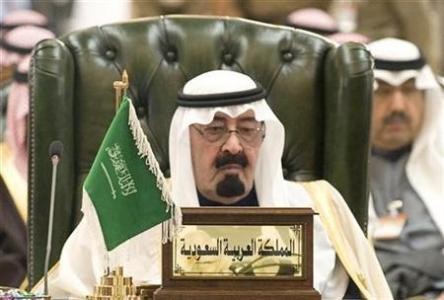 The public lynching and gruesome murder of Libyan dictator Maumar Qaddafi is not a matter to be celebrated; rather it represents another victory for the Saudis and their well placed and petro-dollar funded Ikhwan lobbies in the White House (e.g., Dalia Mogahed) and North America (organizations such as CAIR, ISNA, ICNA, MSA etc).

This is not meant to defend Qaddafi, a ruthless dictator and tyrant who had tyrannized Libya for decades as well as the complicity of his regime in the Lockerbie bombing and the alleged execution of “disappeared” charismatic Lebanese Shia Muslim leader , Musa Al-Sadr.  Al-Sadr’s popularity cut across the religious and sectarian divides in Lebanon as he did his best to (unsuccessfully) prevent Lebanon from descending into civil war in the 1970’s.

Al-Sadr had inspired the poor and disenfranchised Lebanese Shia Muslims to pull themselves up and stake their rightful claim as citizens in a democratic and diverse Lebanon.  Aside from taking the initiative and reaching out to Lebanon’s Maronite Christain community, Musa Al-Sadr was also critical of PLO’s tactics of targeting civilians.   For challenging Qaddafi in Libya, Musa Al-Sadr was allegedly held and subsequently executed by the Qaddafi regime.   After the public lynching of Qaddafi by the Al Qaeda mobs, one will never know what happened to Musa  Al-Sadr.   Like Slobodan Milosovic, Qaddafi should have been tried in Hague;  instead he was executed by the bloom of the “Arab Spring” – the brainwashed youths affiliated with Al Qaeda.

Today, Libya is as far away from becoming a tolerant, democratic and moderate nation as is Egypt.  Similar to the lynching and attacks on Egypt’s indigenous Coptic Christain community by the Muslim Brotherhood linked thugs, the Libyan “rebel” Al Qaeda militias have already attacked scores of Sufi shrines, consistent with an intolerant, narrow sectarian Saudi-Salafi agenda. The contradiction of opposing the Al Qaeda in Afghanistan while supporting the Al Qaeda NTC in Libya is clearly lost on the US and NATO.  They appear to be following a confused and compromised policy that could probably be dictated by Ikhwan lobbyists in the White House .

From ensuring that the Egyptian Army accommodates the Muslim Brotherhood (Ikhwan) in Egypt to crushing the genuine pro-democracy movement in Bahrain, Yemen and also within KSA, the Saudis are calling the shots over a vast stretch of the Middle East and West Asia.

The Arab Spring is as much an oxymoron as flowers blooming in Nejd.  Substitute Tahrir Square for the far smaller rallies in Lahore and Rawalpindi and the showering of rose petals on the murderer Mumtaz Qadri with the lynching of Qaddafi and one can best describe the “Lawyer’s Movement” whose results have been the freeing of mass murderers (Malik Ishaq, Qari Saifullah Akhtar, Hafiz Saeed) and the selective targeting of pro-democracy parties.  For attempting to divert the ISI-initiated “Lawyers’ Movement” into the political mainstream while simultaneously opposing the Taliban, the late Benazir Bhutto was first sidelined with   blatantly biased judgements and then executed by the Pro-Saudi Deep State.

In the daze of the “Arab Spring” few have asked the question as to why the Saudis are supporting the Al Qaeda bloom in Libya?

After 9/11, there was a significant shift in Qaddafi’s geo-political stance. He openly condemned the attacks of 9/11 and positioned himself against the Saudi Salafi lobby and Al Qaeda. The much publisized distance between KSA and Al Qaeda is as genunine as the alleged rift between Pakistan’s military establishment and the Haqqani Network. He was also against nuclear proliferation and was working actively to rejoin the commity of nations. Therefore, he could no longer be relied upon by the Saudis who want pliant regimes from Indonesia to the Ivory Coast in Africa and an accomodation of Salafist political doctrine as espoused by Hasan Al Banna, Syed Qutb and Mawdodi in the heartland of North America and Europe. In the end, the Arab Spring ensured a cosmetic change in Egypt and Libya while making sure that genuine democracy movements were crushed in Bahrain, Yemen and within Saudi Arabia itself.

For example, see this harsh exchange of allegations and counter-allegations between Saudi King Abdullah and Libyan dictator Qaaddafi:

In Egypt, the Muslim Brotherhood and the army used the Tahrir Square protestors as pawns.  In Pakistan,  elitist civil society, by and large, was always the pawn of the military establishment and they had no moral trepidations in hitching their wagon with the Jamaat-e-Islami, Sipah-e-Sahaba and Al Qaeda thugs and their backers and apologists like Qazi Hussain Ahmed, Imran Khan, Mubashir Hasan, Nasim Zehra, Tahira Abdullah and Hamid Gul.  In Pakistan, human rights and civil society activists have often acted as willing or unwitting mouthpieces of the military establishment, as reflected in their various statements and published reports.

In South Asia, the Pakistan army itself is the most loyal pawn  of Saudi Arabia, along with the various Jihado-sectarian militant groups that include the Taliban and  Sipah-e-Sahaba/ Lashkar-e-Jhangvi, LeT etc. Asif  Zardari, who is hated by the pro-army urban elites, is incidentally also hated by the monarchal regime in Saudi Arabia – that alone should raise his stature amongst those who value democracy, secularism and a tolerant society.  For the common admirers of the Arab Spring and the Lawyers’ Movement in Pakistan, they should see this clip of a Saudi activist demanding rights for the marginalized Saudis and the Bahrainis who have been brutally massacred and disenfranchised by the Saudi and Pakistani mercenaries.

Libya has proved that the “Arab Spring” is really a “Saudi Winter”; it will bring nothing but a stark, harsh and gloomy future to all those concerned.