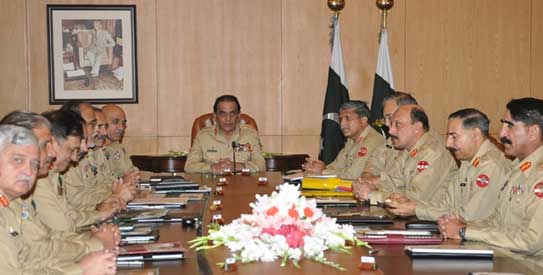 The world may help Pakistan through United Nations Monitoring, Verification and Inspection Commission on Pakistan (UNMOVICP)

In principle, we support any policy initiative which distinguishes Pakistan’s ruling elite (military establishment, their right wing proxies and fake liberal apologists) from the ordinary people of Pakistan. However, it is important to note that India-centric dimension is only one element of Pakistan army’s strategic agenda. Perhaps more injurious not only to the South Asian region and the world at large but also to the people of Pakistan is the Saudi-Ikhwan agenda of a global jihad, a global Salafi aka Wahhabi revolution.

This revolution is currently being implemented in Pakistan and Afghanistan through local radicalised Deobandis (e.g., JUI, SSP, TTP, LeJ) and Wahhabis (e.g. LeT, JuD) and in Egypt and Libya through local radicalised Wahhabis and Ikhwan network. The Saudi-Ikhwan network is known to have a petro-dollar rich, influential lobby in Washington, D.C., the same lobby which successfully misled the USA to wage an Islamic Salafi Jihad against Soviet Union (instead of a straightforward nationalist struggle for freedom), and which is currently using its political, ideological and financial influence to consolidate the Salafi Empire in Afghanistan (through sinister talks with the Haqqani network and Taliban), Yemen (by backing Ali Abdullah Saleh), Libya and Egypt (by successfully hijacking the pro-democracy movement in the respective country via the Wahhabi-AlQaeda-Ikhwan operatives) and by crushing the pro-democracy movement in Bahrain as well as in Saudi Arabia (e.g., in Riyadh and Qatif).

Of course it is not Pakistan’s civilian leaders (who are routinely killed and/or persecuted by Pakistan’s military establishment and its footsoldiers and affiliates), but army generals who are responsible for the Salafi-Deobandi Jihadi mess in Pakistan and the region. The generals who run Pakistani state tolerate and nurture terrorists at home, seek a Taliban victory in Afghanistan and are building the world’s fastest-growing nuclear arsenal. They have sidelined, killed and intimidated civilian leaders elected in 2008. We therefore support Bruce Riedel’s idea of a policy of containment, i.e., a focused hostility aimed not at hurting Pakistan’s people but at holding its army and intelligence agencies accountable.

As Adm. Mike Mullen, then the chairman of the Joint Chiefs of Staff, told a Senate committee last month, Pakistan provides critical sanctuary and support to the Afghan insurgency that we are trying to suppress. Taliban leaders meet under Pakistani protection even as we try to capture or kill them.

We must contain the Pakistani Army’s ambitions until real civilian rule returns and Pakistanis set a new direction for their foreign policy….The generals who run Pakistan have not abandoned their obsession with challengingIndia. They tolerate terrorists at home, seek a Taliban victory in Afghanistan and are building the world’s fastest-growing nuclear arsenal. They have sidelined and intimidated civilian leaders elected in 2008. They seem to think Pakistan is invulnerable, because they control NATO’s supply line from Karachi to Kabul and have nuclear weapons. The generals also think time is on their side — that NATO is doomed to give up in Afghanistan, leaving them free to act as they wish there. So they have concluded that the sooner America leaves, the better it will be for Pakistan. They want Americans and Europeans to believe the war is hopeless, so they encourage the Taliban and other militant groups to speed the withdrawal with spectacular attacks, like the Sept. 13 raid on the United States Embassy in Kabul, which killed 16 Afghan police officers and civilians.

It is time to move to a policy of containment, which would mean a more hostile relationship. But it should be a focused hostility, aimed not at hurting Pakistan’s people but at holding its army and intelligence branches accountable. When we learn that an officer from Pakistan’s Inter-Services Intelligence, or ISI, is aiding terrorism, whether in Afghanistan or India, we should put him on wanted lists, sanction him at the United Nations and, if he is dangerous enough, track him down. Putting sanctions on organizations in Pakistan has not worked in the past, but sanctioning individuals has — as the nuclear proliferator Abdul Qadeer Khan could attest.

We hope that international bodies, European Union and United Nations in particular, will pay serious attention to this proposal and act without late to save innocent Pashtuns, Balochs, Hazaras, Shia Muslims, Ahmadi Muslims, Christians and other minority groups from the ongoing massacres and persecution conducted by Pakistan army, which are routinely ignored or misrepresented by army’s (fake) liberal and right wing affiliates in the media and NGOs.