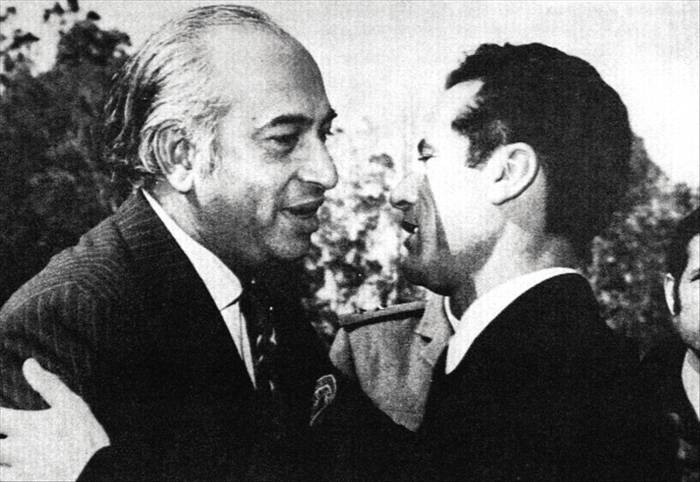 A dear friend of Zulfiqar Ali Bhutto and a supporter of the people of Pakistan, Muammar Gaddafi of Libya was killed in the most violent way by NATO and its Al-Qaeda mercenaries.

The U.S. President Barack Hussein Obama and his Secretary of State Hillary Clinton expressed their satisfaction after the murder of Colonel Gaddafi. Reaction of Obama and Hillary was disgusting and disgraceful particularly after watching what their allies did to the dead body of the slain Libyan leader. But what else can be expected from ruling elites who are actually murderers and thieves in suits. They hide their crimes behind false smiles and polite manners.

The Western media, especially the BBC, Euro News, CNN and others misled and misinformed the audience about the nature and real aims of the NATO aggression against Libya.

Colonel Muammar Abu Minyar al-Gaddafi was among that group of Muslim leaders who had challenged Western domination and sought real independence for their nations.

In the early 1970s Pakistan’s Zulfiqar Ali Bhutto inspired Arab and African leaders who wanted true liberation from their former and new colonial masters. Colonel Gaddafi was one such Arab leader.

Western intelligence agencies and ruling elites got new strong-headed Muslim leaders one after another. When Bhutto of Pakistan was removed from power in a U.S sponsored military coup, Gaddafi asked the Pakistani military dictator General Zia-ul-Haq to send Bhutto to Libya but General Zia and the United States could not risk allowing Bhutto to leave.

After Bhutto’s assassination, Gaddafi opened his country’s doors for Pakistani dissidents and opponents of the American-sponsored Pakistani dictatorship. Hundreds of political refugees from Pakistan were offered asylum in Libya.

Throughout the 1970s and 80s, Gaddafi supported resistance movements and freedom fighters around the world. He was one of the main sponsors of the Irish liberation movement, which was fighting for the liberation of Northern Ireland from Britain. The British were furious and saw Gaddafi as an enemy of the British state. The Libyan leader also provided financial and logistical support to the Palestinian resistance movement. He stood by the oppressed.

Gaddafi’s war on the Capitalist World won him enemies and the U.S. President Ronald Regan called Gaddafi a ‘mad dog’. Gaddafi was accused of sponsoring terrorism. In 1986, the U.S. bombed Gaddafi’s home that killed a child of the Libyan leader but to the U.S. it wasn’t a terrorist act.

The U.S. imposed sanctions against Libya. However, despite Western sanctions, under Gaddafi Libya became one of the wealthiest countries in the Arab world. It maintained highest GDP in Africa. Gaddafi established a remarkable welfare system where state provided free education, health and highly subsidised housing. His administration also established modern infrastructure and communication networks. His water distribution system is a wonder. Even before the NATO attack on Libya in 2011, the country had the highest GDP in Africa and diversification of economy has positive effects on the country’s economic health.

Following the end of the Cold War and after Western aggression against Yugoslavia and Iraq, Gaddafi realised that the world around him had changed. He tried to change himself by courting his enemies.

In the late 1990s, he established friendly relations with the West. He was successful in his overtures because by 2003 ice had started melting. In 2006, the United States had accepted Libya as a ‘friend’.

Gaddafi seemed very excited with his newly formed friendships with Tony Blair, Silvio Berlusconi and Nicolas Sarkozy. He signed deals with the U.S and allowed direct Western investment in Libya. But Gaddafi miscalculated and misunderstood Western mindset and intention in the same way as the Palestinian leaders Yasser Arfat did before him.

Since the split of the Soviet Union, military interventions in domestic affairs of sovereign states have been a new method that powerful countries use to achieve their goals. The U.N Security Council, NATO, the International Court of Justice, NGOs and the media are new tools of Neo-Colonialism.

Most western countries are no longer world’s economic powerhouses but are desperate to maintain their dominance. One way to do so is attacking weak but resource rich or strategically important states. Superiority in military and media technologies help the U.S. and its some Western allies to take control of others’ resources usually in the name of defending freedoms, human rights and democracy.

Nevertheless despite their military might and media campaigns, Western countries could not destroy Yugoslavia, Iraq, Afghanistan and Libya if these countries were not weak from within. Leaders of Iraq, Afghanistan, Yugoslavia and Libya did not bring reforms into their societies. They didn’t allow reasonable freedoms in their societies and didn’t tolerate dissent. They were afraid of change. Under Saddam Hussein Iraq developed economically, the standard of life was high in Gaddafi’s Libya. Iraq and Libya were peaceful societies. But Saddam and Gaddafi both restricted freedoms and tried to unite people by force.

Frustrated young generations and minority groups in traditional societies can be easily manipulated. Often young people want freedoms and opportunities. The West exploits such conditions by highlighting through media and public diplomacy channels that Western societies are free and fair.

In the 1980s, the West used satellite TV to encourage discontent in Eastern Europe and later in the Soviet Union. With the development in technology, propaganda techniques have also become more sophisticated. Developing countries cannot match Western sophistication in this field.

Since the 1990s, a pattern has been emerging where before a military intervention in a state NGOs, rights groups, think tanks and the media launch a concentrated propaganda campaign targeting a particular country. Stories of human rights violations, state oppression and police atrocities are speared in a calculated way. Video images and cyber space are used to build public opinion. Think tanks and research organizations issue reports and analysis that give credibility to charges against the targeted state.

A context is manufactured and provided to audience, particularly to the Western public who are forced to understand complex issues in few second video clips. That is how villains and monster are created, and then defeated by good guys of NATO or paid mercenaries.

Gaddafi is the latest victim of this cruel game. There will be more staged wars and military operations and intervention in the future. Evil minds will continue using latest killing machines and propaganda techniques to re-colonize the world nonetheless latest media technologies are double edged swards, which can be used to hide facts and manipulate minds, but the internet and mobile phone images can unmask evil designs and dirty wars. 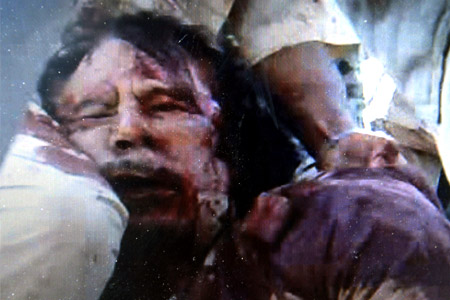 People around the world have not forgotten images from Iraqi prisons as well as Saddam Hussein’s hanging. Gaddafi’s bloodied body will haunt the imperialists for a long time to come.