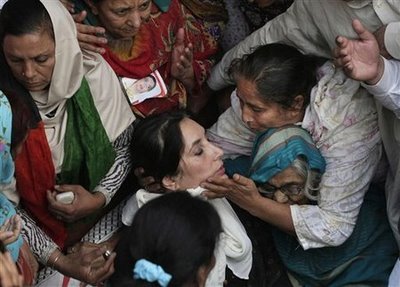 LAHORE: The United Nations’ Inquiry Commission probing the assassination of the former Pakistani Prime Minister Benazir Bhutto recently posed some tough question to the former director general of the Intelligence Bureau (IB) and a close associate of Musharraf, Brig (retd) Ejaz Hussain Shah, primarily on two counts – firstly, what arrangements he had made being the person officially responsible for protecting Bhutto and secondly, why did she name him in a letter as someone who could hurt her.

According to well placed government sources in Islamabad, during their recent meeting with the former IB chief in Lahore, the UN Commission members had also questioned him about his alleged links with certain al-Qaeda-related jehadi elements, including Qari Saifullah Akhtar and Sheikh Ahmed Omar Saeed. The sources said it is widely believed that Ejaz Shah had been the handler of the two jehadis during his tenure as the director general of the Punjab chapter of the ISI. Incidentally, it was Ejaz Hussain Shah who had arranged the surrender of Sheikh Ahmed Omar Saeed, the killer of US journalist Daniel Pearl, in February 2005 in Lahore. Then, Ejaz Shah was the home secretary of Punjab. However, the actual relationship between Ejaz Shah and Sheikh Omar Saeed was believed to be that of a handler and his agent.

Although the former IB chief could not be contacted despite repeated attempts, his close circles refuted that he was questioned by the UN Inquiry Commission “as someone having something to do with the Bhutto murder”. These circles added: “It was a routine meeting in which Brigadier Sahib was asked normal questions regarding some intelligence reports about possible threats to Benazir Bhutto’s life after her homecoming as well as the security measures taken by the Intelligence Bureau, being the only civilian security agency.”

However, the fact remains, after the first suicide bombing attack on her life in Karachi in October 2007, Bhutto had nominated three persons, then DG IB Brig (retd) Ejaz Hussain Shah, then Punjab Chief Minister Ch Pervez Elahi and then Sindh Chief Minister Arbab Ghulam Rahim as being involved in the bomb blasts. Hardly a week earlier Bhutto had mentioned Ejaz Shah’s name with displeasure in London, saying he was trying to sabotage reconciliation between the PPP and Musharraf. On October 19, 2007, a day after the Karachi attack, Bhutto disclosed at a press conference that she had informed Musharraf in a confidential letter, written on 16 October 2007 that three senior government officials were planning to assassinate her upon her return. “I had further made it clear to Musharraf that I won’t blame Taliban or al-Qaeda if I am attacked, but I will name my enemies in the Pakistani establishment,” she told journalists.

In an interview with a Pakistani daily on 13 August, 2007, Bhutto said, ‘Brigadier Ejaz Shah and the ISI recruited Sheikh Ahmed Omar Saeed, who killed Danny Pearl. So I would feel very uncomfortable making the Intelligence Bureau, which has more than 100,000 people underneath it, being run by a man (Ejaz Shah, the DG IB) who worked so closely with militants and extremists.’ On November 3, 2007, two weeks after she returned home, Bhutto, in an interview with Sir David Frost, referred to “three individuals who wanted to kill her, one of them a very key figure in security who she claimed had dealings with Omar Saeed Sheikh.” Asked in an interview on NBC television on 20 October 2007 whether it was not risky to name a close friend of Musharraf as being someone who’s plotting against her, Bhutto said: “Well, at that time I did not know whether there would be an assassination attempt that I would survive. I wanted to leave on record the suspects. I also didn’t know he was a friend of Musharraf. But I asked myself that even if I knew that he was a friend and I thought of him as a suspect, would I have not written? No, I would have written”.

However, a high-level meeting presided by General Musharraf in Islamabad had dismissed Bhutto’s accusations as childish. According to Pakistani media reports, the participants of the meeting were informed that the Karachi suicide attack on Bhutto bore the hallmarks of al-Qaeda, arguing that she had incurred the wrath of militants because of her support for the military operation against the Red Mosque (Lal Masjid) fanatics in Islamabad in July 2007 and for declaring that she would allow the International Atomic Energy Agency (IAEA) to question the father of the Pakistani nuclear programme, Dr Abdul Qadeer Khan, pertaining to his proliferation activities. Days before her return to Pakistan, Bhutto had told The Guardian on 15 October 2007 she felt the real danger to her life came from well- placed fundamentalist elements in the Pakistani intelligence establishment who were opposed to her return.

Talking about Qari Saifullah Akhtar, the government sources recalled that in her posthumous book, Benazir had named the ameer of the Harkatul Jehadul Islami (HUJI), Qari Saifullah Akhtar, as a principal suspect in the October 18, 2007 assassination attempt on her life in Karachi, a few hours after her return from self-exile. In her posthumous book, Benazir stated, “It was Qari [Saifullah] to whom the intelligence officials in Lahore had turned to for help before my homecoming on 18 October 2007. I was informed of a meeting that had taken place in Lahore where the bomb blasts were planned. However, a bomb maker was needed. Enter Qari Saifullah, a wanted jehadi terrorist who had tried to overthrow my second government in the 1990s. According to my sources, the [intelligence] officials in Lahore had turned to Qari for help”. Following Bhutto’s murder, it emerged that Saifullah had quietly been released by the establishment as one of the missing persons being sought by a Supreme Court bench headed by Chief Justice Iftikhar Chaudhry. Qari is generally considered to be a handy tool of the Pakistani intelligence establishment who is used and dumped whenever required by the all-powerful spy master.