LUBP is pleased to publish the following lecture (video) and the associated talk by Dr. Taimur Rahman which presents Laal’s brave, principled stance on religious extremism and terrorism in Pakistan and the wider region:

Many people consider religious extremism to be, merely, a spontaneous response to drone strikes and NATO occupation of Afghanistan. The reality is very different. In fact, the CIA and the ISI deliberately planted religious extremism to fight communism during the Cold War. The truth is that the CIA and the ISI are responsible for the death and destruction we see in Pakistan today.

In April 1978, a socialist revolution lead by the Peoples Democratic Party of Afghanistan (PDPA) swept over the country. The revolutionary government enacted the following reforms:

This revolution challenged the interests of tribal heads and landlords. To defend their property, these classes raised the slogan that “Islam was in danger”. In fact, Islam was in no danger at all. Only tribalism and feudalism were in danger. However, this slogan became the rallying cry for a counter-revolution.

The CIA began supporting this counter-revolution and on July 3, 1979, U.S. President Jimmy Carter began “Operation Cyclone”, which went on to become the largest operation in the history of the CIA. Moreover, this CIA intervention began 6 months before the Soviet intervention in Afghanistan. In fact, it can be argued that the Soviet intervention was a response to CIA’s plans of aggression against the revolutionary government of Afghanistan. Zbegnew Brezinski (National Security Advisor to President Carter) openly accepted that US intervention began with the explicit objective of provoking a Soviet retaliation in order to trap the Soviet Union in an Afghan war. Brzezinski stated: “According to the official version of history, CIA aid to the Mujahideen began during 1980, that is to say, after the Soviet army invaded Afghanistan, 24th December 1979. But the reality, secretly guarded until now, is completely otherwise. Indeed, it was July 3, 1979 that President Carter signed the first directive for secret aid to the opponents of the pro-Soviet regime in Kabul. And that very day, I wrote a note to the Pres in which I explained to him that in my opinion this it was going to induce is Soviet military intervention… That secret operation was an excellent idea. It had the effect of drawing the Russians into the Afghan trap… The day the Soviets officially crossed the border, I wrote to President Carter. We now have the opportunity of giving to the USSR its Vietnam War” (Le Nouvel Observateur, Paris, 15-21 January 1998).

Declassified documents of the CIA today prove beyond any shadow of a doubt that the United States of America intervened first in Afghanistan, attempted to topple the revolutionary government, and deliberately provoked war and counter-revolution in the region. These declassified documents, featured in the video, are presented below: 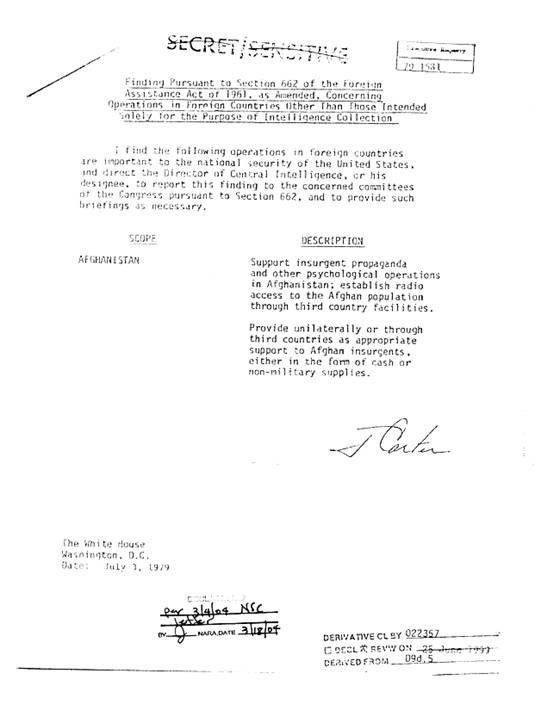 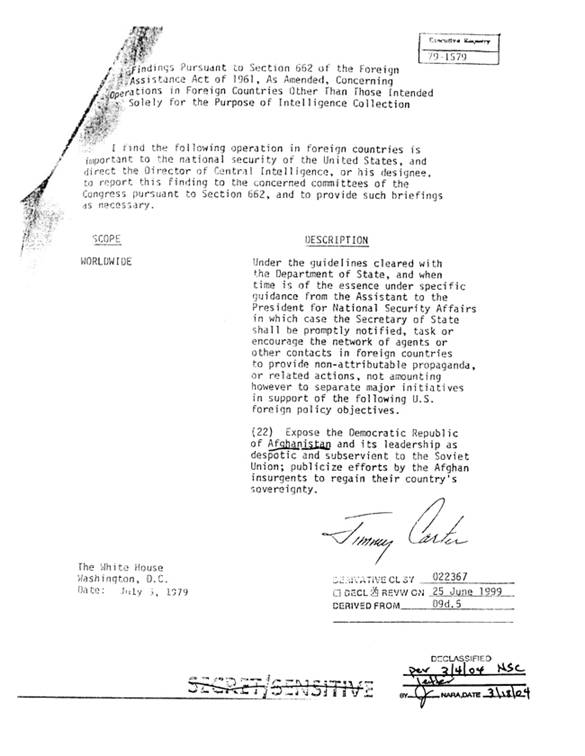 Moreover, it is also clear today that not only Saudi Arabia, but also Israel also financed and armed this counter-revolution undertaken by the Mujahideen (the evidence for this is available in Charlie Wilsons’ biography “Charlie Wilson’s War”). These so-called Mujahideen had no qualms about the fact that their financial support came from the same forces that were murdering Palestinians. They carried out terrorism against the Afghan population while increasing their numbers within Pakistan. Between 1979 and 1990, Jihad-related organisations and sectarian organizations doubled. By 2002, more than 7,000 madrassahs offered “degrees” in higher education. It is estimated that about 22,000 madrassahs reaching over 1.5 million children are active in Pakistan today.

With the withdrawal of Soviet forces, and the final defeat of the Afghan left-wing government in 1992, tribal heads and landlords came back into power. But very soon they began to fight with each other. This clash occurred because the Pakistan army considered Afghanistan to be an area of strategic depth. They wanted complete control over Afghanistan. They supported Hekmatyar against the Rabbani government and this clash resulted in the complete destruction of Kabul. The Pakistan army then prepared a new force called the Taliban. And by 1996 the Taliban, with the help of the Pakistan army, had defeated nearly all its rivals and established a government in Afghanistan.

Here are some examples of the punishments that the Taliban government decreed.

The legacy of nearly a decade of fundamentalist rule is as follows:

Following in these illustrious footsteps the Tehreek-e-Taliban Pakistan and other fundamentalist parties have also undertaken the campaigned destruction across Pakistan. Over 1000 schools have been destroyed in Pakistan. They have undertaken public punishments, including gruesome torture and amputations that are a throw back to medieval practices. They have bombed the Islamic University, the Shia processions, Moon Market of Lahore and many other civilian targets. The inquiry of the elected government has implicated the TTP in the December 2007 assassination of Benazir Bhutto. They killed the Governor of Punjab Salman Taseer and the minister of minorities Shahbaz Bhatti. They attacked the Sri Lankan cricket team. They have killed countless tribal leaders in the northern areas. For instance, they claimed responsibility for the November 6th, 2008 attack that killed 16 tribal elders and injured 31 others in Bajour. The TTP claimed responsibility for the coordinated strike in Lahore against the buildings used by the Federal Investigation Agency (FIA), the Manawan Police Training School and the Elite Police Academy on March 30th, 2009. They have killed many NGO workers. For instance, they took responsibility for an attack against the UN’s World Food Program Islamabad office on October 5, 2009. In Lahore they attacked two mosques of the Ahmedi community in May 2010. On March 8, 2011 they blew up a gas station in Faislabad that killed at least 32 and injured another 125 innocent people. On April 4, 2011 they attacked the Sufi shrine during the time of the annual Urs in Dera Ghazi Khan killing more than 50 and leaving more than 120 injured. Similarly, they attacked Data Darbar causing mass casualties. They attacked Baba Fareed’s mazar in Pakpattan. And they attacked Rehman Baba’s shrine. They have targeted the homes, families, and even the funeral processions of their opponents. The government estimates that more than 37,000 people have been the victims of terrorism in Pakistan (30,000 of these are civilians). Hence, it is clear that religious fundamentalists are in an all out war with the rest of society and the march of history.

What can we do?

Firstly, we have to fight against the confusion created by right-wing forces. Arguments such as “this is America’s war”, “the Taliban are fighting US occupation and should be supported”, “opposition to Taliban is an elitist, pro-imperialist, NGOist demand”, “opposition to the Taliban means opposition to Islam”, “let the Americans fight the Taliban, why should we” fail to understand that the increasing power of religious fundamentalism, implies proportionately decreasing power for the people.

US imperialism or the Armed Forces of Pakistan are interested only in fighting those religious fundamentalist groups that are no longer under their control. They are not interested in fighting religious fundamentalism as a whole. If they are able to come to an agreement over the spoils of exploitation, they will be at peace with each other as they were during the Cold War.