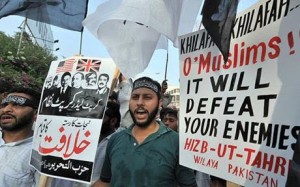 What Hizb ut-Tahrir peddles is escapist fascism that appeals to people who want to be told what to do
The bearded and elegantly attired supporters of Hizb ut-Tahrir (HT), the fundamentalist Muslim group, like to emphasise the non-violent nature of their party. As a recent press release put it, they “have never resorted to armed struggle or violence”. This is correct as far as it goes. While HT has openly engaged in the politics of hatred, particularly towards the Jews, it has not, strictly speaking, advocated violence.

But this does not mean that it is not a violent organisation. During a recent debate on PTV, the Pakistani satellite channel, a prominent member of HT told me emphatically: “The idea of compromise does not exist in Islam.” This is standard HT rhetoric, and it explains why the group is deemed dangerous and worthy of being proscribed. Intolerance of that kind is a natural precursor of, and invitation to, violence.

In fact, violence is central to HT’s goals. Its primary objective is to establish a caliphate. It seeks, I have been told on numerous occasions, a “great Islamic state” ruled by a single caliph who would apply Islam “completely to all Islamic lands” and eventually to “the whole world”. What would be applied “completely” is the sharia, Islamic law.

No wonder they recognise no compromise. Their ideology argues that there is only one way Muslims can or should be ruled, that those who form this caliphate have the right to rule, that all others must submit unconditionally and that only this political interpretation of Islam is valid and legitimate. In other words, the caliphate of Hizb ut-Tahrir’s vision can be established only by doing violence to all other interpretations of Islam and all Muslims who do not agree with it – not to mention the violence it must do to the rest of the world, which also must eventually succumb.

The notion of the caliphate was problematic from the very beginning of Islam. All Muslims recognise the authoritative example of the four caliphs, the “rightly guided” rulers who were the immediate successors of Prophet Muhammad. Their authority derived from having been the Prophet’s closest companions, most familiar with his teaching, methods and practice. Such circumstances are unrepeatable. And even then each faced dissent and rebellion: three were actually murdered.

There were many more caliphs in Muslim history, but it was with the fifth caliph, Muawiya, that the institution became a work of Islamic imperialism. Like all imperialisms, it was always tenuous and never complete in its governance of Muslim territory. The caliphate was occasionally only effective in the heartlands of the Middle East, and in those heartlands it was eventually resisted and rejected by its own citizens.

The religious scholars of early Islam saw the caliphate as a work of naked power and they tried to keep themselves at arm’s length from it. Indeed, religion throughout Muslim history has operated as an alternative, in tension with the caliphate: it was a repository of ideals of justice and equity, and its purpose was to speak the truth to the vainglory of institutions of power.

Perhaps the most cogent reason why the religious scholars who first developed Islam’s legal reasoning rejected an all-powerful unitary caliphate was that they accepted diversity. They knew that different circumstances and environments would lead to different ways of fulfilling the moral and ethical principles laid down by the Koran. In this context, they saw the sharia not as a divine utterance of immutable law, but as the earnest attempts of Muslims in history to put into action their understanding of the Koran. These founders of Islamic thought produced and acknowledged different schools of sharia because they accepted diversity as part of the inherent design of Islam.

The reductive refashioning offered by Hizb ut-Tahrir makes sharia immutable, something that is beyond thought or change. The particular sharia they advocate was formulated in the ninth century and is frozen in history. Inherently violent towards women, minorities and criminals, it has never been willingly accepted by Muslims but always had to be forcibly imposed by authoritarian regimes. Inevitably, HT’s adherence to the idea of one caliphate with one sharia leads it to put a particular spin on the idea of jihad: it must be an all-out offensive war. A “concept” document from the group makes this clear: “Jihad is a war against anyone who stands against the call to Islam, whether he is an aggressor or not.”

So, while HT may not directly engage in violence, it certainly preaches engagement with violence.

What HT peddles, in fact, is an escapist romantic fascism of a sort that appeals to members who simply want to be told what to do. Not for them the awesome responsibility of making their own choices. They are not responsible for the British society in which they live and neither will they be responsible for the Islamic society of which they dream – because there, too, they will merely be told what to do.

Violent though Hizb ut-Tahrir’s vision is, society’s answer should not be to ban it, but rather to expose and ridicule the intellectual poverty of its delusions. Ridicule, as opponents of the religious hatred legislation are so keen to point out, is a potent weapon. It should be our weapon of choice in the fight against Islamic fascism.

Ziauddin Sardar, writer and broadcaster, describes himself as a ‘critical polymath’. He is the author of over 40 books, including the highly acclaimed ‘Desperately Seeking Paradise’. He is Visiting Professor, School of Arts, the City University, London and editor of ‘Futures’, the monthly journal of planning, policy and futures studies.

Click here to post a comment
Judicial relief for LeJ terrorists: A case for rethinking justice – by Ayesha Siddiqa
Ali Khel, where Sunnis and Shias were massacred by TTP-LeJ-SSP proxies – by Farhat Taj