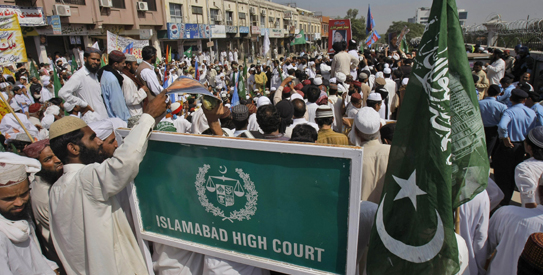 Liberals are against death sentence yet not ready to accept any punishment less than death penalty for Salman Tasir’s murderer whereas most of the religious people who are in favor of death sentence expect no punishment in this case.

What an ironical conflict?

For liberals…what they think “deen e fitrat” is prevention against crimes or not?

For conservatives…do they believe in “deen e fitrat” or not?

Do they think that person has a right to kill anyone in his personal capacity?

If yes then everyone can impose such allegations on anyone and can kill his/her opponent in the name of religion.

And last but not the least what is the official/legal status of Mufti’s who issued Fatwas in such cases?

Why they (the people who are protesting for Qadri) still need a State or Supreme Court?

Whereas state law has never allowed such individual acts. We have many sects and even in one school of thoughts you can find difference of opinion on certain issues.

A serious & strict legislation is required on this “Fatwa” issuing mater to prevent state structure. —