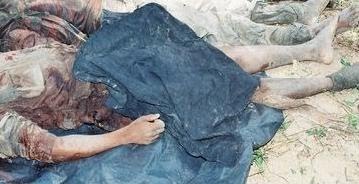 Asian Human Rights Commission has issued a comprehensive statement on the state of Baloch genocide in Pakistan which is currently being carried out by Pakistan army, its various sub-organizations and agencies (FC, ISI, MI etc) as well as jihadi proxy organizations (LeJ, SSP, Jundullah, TTP etc).

In short, Pakistan army has extra-judicially killed more than 200 disappeared persons in Balochistan between August 2010 and October 2011. The federal and provincial governments have played an ugly role in the entire episode acting as either mere spectators or worse, as enablers of such illegal killings by repeating and reinforcing the Pakistan army’s lies.

While Pakistan army is the key culprit in conducting the Baloch genocide, the complicit role of the following actors cannot be ignored:

It is in the light of the above that we welcome the AHRC’s report and urge other human rights agencies (Ali Dayan Hasan of HRW, Mustafa Qadri of Amnesty, Zohra Yusuf of HRCP etc) to show similar interest and integrity in highlighting the Baloch genocide by Pakistan army and also highlight how such genocide is being ignored and/or misrepresented by Pakistan’s mainstream media and urban fake liberals.

Some snapshots from the AHRC report (summary by Salma Jafar – via Twitter):

To-date 206 disappeared persons have been extrajudicially killed in Balochistan during the past 15 months
October 13, 2011

The situation of Balochistan is no different to that of the former East Pakistan (Bangladesh) when the military carried out operations and killed more than 300,000 people in the guise of protecting ideological boundaries.

The government does not consider extrajudicial killings anything out of the ordinary and one of the reasons for this is that they have lost all control over the military, Para-Military forces and state intelligence agencies that control the province. These military forces brook no interference into their affairs and use ‘national security’ and the protection of ideological boundaries to justify the killings and disappearances of innocent persons, particularly students.

Not a single day goes by without an extrajudicial killing. In the recent years a new phenomenon has been introduced in the cases of disappearances where the victims are extrajudicially killed in order to destroy any evidence of wrong doing.

The Voice of Baloch Missing Persons (VBMP), an organization which collects data about the disappearances and extrajudicial killings has compiled a list of 206 persons from July 2010 to the date of this publication from different districts of Balochistan. The victims were extrajudicially killed and their mutilated bodies which bore marks of torture were found on the roadside. Amongst the 206 corpses 32 of them were not identified as their bodies were too badly decomposed. Many persons were identified by their clothes, shoes and personal effects. Please find here the list of 169 persons, who were extra judicially killed after their disappearance.

The provincial government and Federal Minister for Interior Affairs claim that the Balochis were agitating against the government and were killed as a result of their ‘illegal’ actions. They do not accept the claim by activists that the deceased were extrajudicial killed. The media has been prevented from covering the incidents of disappearances and killings by the state forces. However, they do produce reports that anti-state activists were killed due to their militancy or in-fighting between militant groups. It has become increasingly dangerous for the people of Balochistan, particularly students to travel outside the province as they are arrested or taken out from the vehicles and kept in incommunicado and after some time their bullet riddled bodies are found.

The month of October 2011 was selected for dumping the bodies of the missing persons in the province as the Prime Minister of Pakistan was visiting to the province. This act shows the arrogance of the military forces and intelligence agencies operating in the province that no civil authority should question their power. This was a blatant warning to the government when the Prime Minister held his cabinet meeting there in a bid to show the world that the civilian state’s writ of Pakistan is established in Balochistan.

To substantiate their arrogance a massive military operation has been launched in the Chamalang areas of Balochistan. According to reports published in website media, the Pakistani Air Force have pounded the villages with heavy bombardments resulting in the deaths of two women and a child besides the destruction of several homes and live stock. Jet fighters, helicopters and heavy artillery have been deployed and they are constantly pounding area indiscriminately, local reports say. Fear of more deaths and destruction is likely to increase in the affected areas, which is out of bounds to foreign and local media.

In the addition of list of 169 persons extra judicially killed more bodies of activists are found the month of October, 2011within just three days, the tortured and bullet-riddled bodies of nine activists and students turned up on the roadsides in Balochistan. The names of those identified are: Rashid Ali, Shafi Mohammad, Sameer Rind, Abdul Mutalib Baloch, Ghulam Ullah Baloch, Abdul Waheed Baloch.

Sameer Rind, a young man of 20 years, was arrested by the law enforcement agencies in October 10, 2010, and was disappeared. His bullet riddled body was found Kulanch area of Pasni on October 10, 2011 exactly after one year of his disappearance. This is the dilemma that students and activists and journalists face if their words or political writings offend Pakistan’s army or go against the intelligence agencies. Sameer was among those persons who were pointing out these things to fellow students. In many cases, the abducted persons were not even political activists but were only Baloch civilians.

Another student, Abdul Mutalib was abducted by FC personnel when he was on his way to Gwadar from Jiwani on 14th September 2011 and in less than one month his bullet riddled body was found on October 10, 2011.
Also on October 10, two more bodies of missing persons were found near the Arbab Plaza. Mr. Rashid Ali Baloch of the Baloch National Movement was missing from July 2011and the same day the bullet riddled body of Shafi Muhammad Baloch of Zehri area was found.

Prior to the latest extrajudicial killings, two more bullet riddled dead bodies were found in the month of September 2011, less than a month of their disappearance by the state agencies. That bodies, recovered from Baghbana Khuzdar, were identified as Ghulam Ullah Baloch General Secretary of Baloch Watan Movement (BWM) and Waheed Baloch alias Balach, a member of Baloch Student Organisation, BSO Azad. Ghulam Ullah Baloch was abducted on August 23 2011 from Khuzdar while 17 years old Waheed Baloch was abducted on 8th August 2011 by the police and plain clothed persons.

The people of Balochistan are generally termed as the anti-state elements by the law enforcing agencies and the federal ministry of interior and whenever any citizen of the province talks about their rights he or she has to face the brutal action of the law enforcement agencies who are alien to Balochistan and have no concept of the local culture and traditions. The situation is very much similar to that of former East Pakistan (Bangladesh) where troops from other parts of the Pakistan unleashed terror against the local population and who were totally unaware of the local culture and tradition, which resulted in the killings of more than 300,000 Bengalis and the dismemberment of the country. In Balochistan the local people are treated as agents of India as Bengalis were accused of being so many years ago. The Federal Ministry of the Interior always blames the nationalist as being Indian agents but he rarely visits the province.

Ironically, this same ministry never takes any action against the Jihadis or sectarian militant organizations that kill the people on a daily basis in bomb blasts, terrorist activities or sectarian violence against the religious minority groups. It is said that religious militant groups and Jihadis have the patronage of Pakistani military and the ministry.

In his latest visit to Balochistan, the prime minister ignored the issues of the Balochi people and allied himself with the army forces. Talking to reporters after attending a passing-out parade at the EME Centre of Baloch youths inducted into the army after completion of training, Prime Minister Gilani said, “Angry Baloch leaders are our brothers and we are ready to go to their doorstep to resolve issues through dialogue.” He talked about the leaders of Balochistan not the people of the province showing his solidarity with those people who are least concerned with the people of Balochistan. His remarks reminds people of the days of military action against Bengalis when military rulers were using the same words to appease the leaders of Bangladesh and ignore the people.

The Supreme Court and the judicial commission formed to investigate forced disappearances have proved totally impotent and more concerned with appeasing the military than providing justice to the families of the disappeared. In the hearings the judges and conveners made loud pronouncements for the sake of the media but do not have the courage to call the military officers and others indentified by the victims and their families to appear.

The entire country of Pakistan is on the brink of a violent movement which may prove more than they can handle. The government has the option of reining in the military and intelligence agencies and providing justice to the victims. However, it would appear that it concerned only with its own survival. What the government must realise is that the people of Balochistan will only be pushed so far before they start pushing back and that will lead to untold horror and bloodshed.

The acceptance of the government of the absence of the rule of law and the ongoing human rights abuses is not going unnoticed by the electorate. The international community is taking notice of this and the government will not be able to sweep this under the carpet by denying knowledge of what is going on.

The government must come to its senses and put a stop to the endless extrajudicial killings of the citizens of Balochistan and order the immediate release of all those who have been forcibly disappearances. Also, it must urgently pass legislation to make forced disappearances a crime under the laws of the country. The military presence in Balochistan must be withdrawn and a tribunal formed to investigate the human rights abuses perpetrated by the military and punish those persons found guilty.