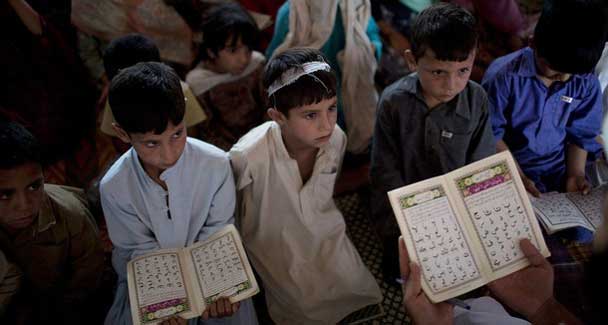 There have been several shocking incidents over the past week or so that go only to highlight the kind of intolerance we are facing in our society and the manner in which this is spreading. Worst of all the spirit of hatred has also seeped into classrooms, and is being used to poison the minds of children.

This process will of course lead to the emergence, even before our watching eyes, of yet another generation persuaded that it is acceptable to discriminate on the basis of beliefs or other factors, or that minority groups are inherently inferior to the majority – deserving no place in mainstream society.

Just a few days ago, 10 Ahmadi children, seven of them girls, were expelled from a school in the Hafizabad area, simply on the basis of their religious identity. The incident took place soon after preachers promoting anti-Ahmadism had visited the town and lashed out with familiar vitriol against a religious group that has been thrust out of the mainstream and then subjected to years of vicious discrimination.

The feeble plea by the principal of the private school, that he did not wish to turn away the children from the school doors but had no choice in the face of threats made by villagers, just goes to show how weak we have become.

No one has answered the question of the distraught father of three of the girls driven away from school who asks how his daughters will now receive an education. Beyond the representatives of the Ahmadi community in Rabwah and some human rights groups, no one has spoken out in their support.

The issue has not been discussed by furious media anchors, even though the Constitution of our land lays down in unequivocal terms that every citizen has a right to education and cannot be denied this under any circumstances.

Such silence is perhaps the most dangerous element of all. The streets and other public places have been left to bigots, such as those who have been on the streets demanding the immediate release of Mumtaz Qadri, the man sentenced to death for the murder of Salmaan Taseer.

Precisely the same silence prevailed after yet another horrendous incident at a school a few weeks ago when an eighth-grade Christian girl was turned out of a POF-run school in the town of Havelian after making a minor spelling mistake in an Urdu paper.

Her teacher interpreted the mistake as an act of blasphemy, publicised the matter – which essentially revolved around one dot in a paragraph about a ‘naat’ – and as clerics staged protests the powerful POF management chose not only to expel the girl, but also to transfer her mother, a nurse at a hospital.

Such incidents have occurred elsewhere too. Ahmadi children have been punished in schools, their faith ridiculed and admission denied simply on the basis of their religious beliefs. Amidst all this, we talk of ‘the silent majority’. But do we really know what people believe and think?

It is true that many, indeed most, do not agree with the rabid views of the extremists. We would like to believe this is true. But popular thinking has been warped over the years by all kinds of factors that began essentially with the deliberate and evil distortions initiated in the early 1980s when our society first began its most serious transformation into an uglier, nastier place.

Discrimination is not based on religious beliefs alone. At an elite Lahore private school, a child from a different ethnic background was mocked and subjected to continuous ridicule for his appearance. It seems that the school management didn’t do very much to check this behaviour or persuade the majority of students who had resorted to uncivilised conduct towards the student to correct their ways.

Racism and bigotry of course need to be stopped using some degree of force within an environment in which the two have spread quite far and grown deep roots. African students based in colleges in Lahore and other cities will no doubt testify to the kind of treatment they face, solely on the basis of their skin colour.

One question that we all need to ask is why the government sits by as a silent spectator while all this happens. It needs to play a far more proactive role. We stand where we are today as a result of carefully thought out behaviours and policies put in place in the past. They succeeded in twisting minds and creating an atmosphere in which hatred, distrust and intolerence could blossom.

The need now is to begin an immediate reversal of this process. In the first place, the relevant authorities need to take notice of the instances of expulsion from schools on the basis of open and undisguised discrimination; this would put in place a good example of what should be done and where right separates from wrong, like oil from water.

There is no time to lose. It is quite obvious that things are growing worse and worse virtually by the day. Our only hope for the future lies in nurturing a generation that is able to think more openly and adopt an approach which is different to the destructive one that has become a normal part of our society today.

The provision that all citizens are equal needs to be turned into reality and not just a clause in a document that fewer and fewer people seem to be very bothered about.

How do we begin this? Schools are a good place to start. Government schools are perhaps the best, given the number of children attending them and the control the administration should have over them. Through curriculums and training for teachers, both children and those entrusted with the delicate task of educating them need to learn to think differently.

This is not an easy task of course. But it has been done elsewhere; Ireland, where Protestants and Catholics were deeply divided in the north for so many years, is one example where attempts towards greater harmony through schools have met with some success.

There are other examples in the world. We need to emulate them and move towards building a place where people are ready to speak out for what is right and refuse to allow extremist elements – who attempt to validate their intolerant ways by citing a distorted version of religion – to dictate how we live and what we do.

The writer is a freelance columnist and former newspaper editor

US, India: Educational collaboration is a driving force in strategic dialogue
Tasks of a revolutionary government – Amjad Ayub Mirza