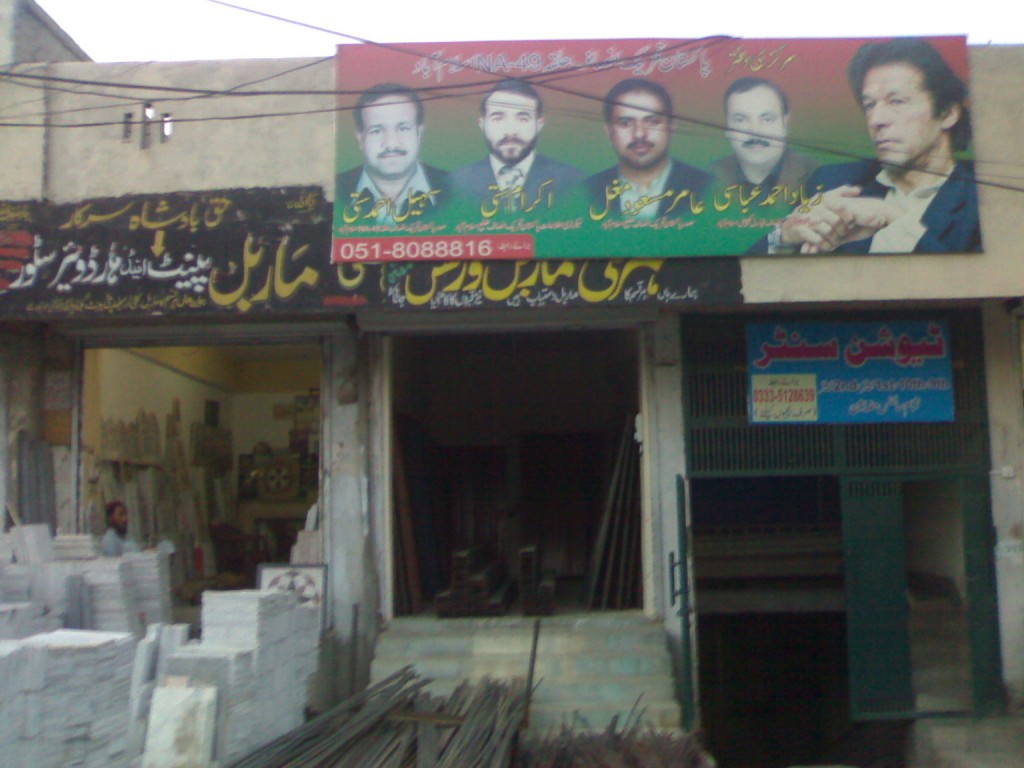 According to Pakistani media insiders, Central Office (NA-49) of Pakistan Tahreek-e-Insaaf (PTI) is converted to Iron Store. According to the property owner, rent for the last 6 months is outstanding but President of PTI (NA-49), Sohail Satti, is neither visiting the office nor attending any call to his mobile phone.

It is hard to imagine how Imran Khan will bring change in Pakistan in the presence of such ‘leaders’ who cannot deliver insaf (justice) to a commoner (property owner in this instance). If insaf providers fail to pay the monthly rent, who will provide insaf? How can the persons who do not fulfill their promise to pay rent, expect the public to trust their promises on national issues of much wider importance and implications?

It is high time that Imran Khan puts his own house in order (including his own JI-ISIesque mind), otherwise his slogans for revolution would only remain shallow and hilarious. For that, he will have to spare some time from attending all too meaningless TV talk-shows, ISI-JI sponsored dharnas and pro-Taliban excuses and justifications.

Postscript: Here is a copy of an email by the PTI Information secretary which does not require much commentary. Enjoy!

Before this news spread like a fire, many journalists including ….. had contacted me for PTI version.

I personally had visited the central office and also met with owner Haji Liaqat. He confirmed me that office is closed since last 5 months.

Due to no activity by PTI, the owner said he had converted it in to Iron Store.

Knowing this, I immediately contacted President Sohail Satti and Amir Moghal but no one showed any interest.

Now the cat is out of bag but we should admit our mistakes to avoid in the future and not try to mislead the masses by giving false statements. Fact is fact and there is no larger room arranged in the building as you claimed. If so, please tell us the new office address and share the photo.