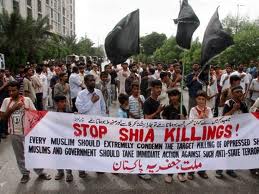 Pakistan’s Shia, Hazara and other volunteer human rights activists reject Amnesty, HRW and HRCP’s biased and misleading reports and statements on the systematic and ongoing Shia massacres in Pakistan.

Volunteer rights activists are deeply offended by the deliberate attempts of professional human rights “activists” to obfuscate the truth. This cartel of human rights activists takes cues from one another instead of independent reporting. They are actively trying to mislead, and deflect attention away from the core reason as to why Shias and other religious and ethnic groups are being massacred in Pakistan.

In all of their reports, there is no mention of the main perpetrator, Malik Ishaq and his Lashkar-e-Jhangvi, who are chiefly responsible for the ongoing Shia genocide in Pakistan.  Neither is there any mention of LeJ’s Judiciary and media supporters and GHQ sponsors and protectors.

In this post, we attempt to deconstruct the lies and confusion that has been created by HRW, HRCP and Amnesty International in Pakistan to deflect attention away from both the victims (Shias) and their killers (Lashkar-e-Jhangvi).

In a highly insensitive, dehumanizing and typically dishonest statement after the Mastung massacre, HRCP simply dismissed the Shia killings as “routine sectarian killings” thereby dishonest implying that the twenty-six Shia Hazara labourers that were killed were part of some tit-for-tat revenge.  This we have already deconstructed in Intellectual dishonesty in misrepresenting Shia massacres in Pakistan.

Another tactic that is used by both Amnesty Interational and HRW, is to present these killings as part of an “ethnic cleansing” campaign that is limited to killing Hazaras in Quetta because of their ethnic identity.  (refer to Ali Dayan Hasan’s tweets copied at end as well as the statement released by Mustafa Qadri of Amnesty International in Pakistan).  This reflects a shocking level of dishonesty on their part based on the following:

1.         Who is conducting the “ethnic cleansing”.  Besides the Hazaras, there are three other dominant groups based in Quetta.  One are the Balochis who are also the target of a brutal military subjugation.  The others are the Pashtuns and Punjabi settlers.  For “ethnic cleansing” to take place, one or more of these three groups are to be involved.  For instance, in Rwanda in the 1990’s, it was the Hutus who attempted to “ethnically cleanse” the Tutsis leading to planned, large scale massacres.  With their vague generalizations, are HRW and Amnesty International attempting to shift the blame of the massacres of Shia Hazaras on the Balochis? The Pashtuns? The Punjabi settlers.  Either ways, they have dishonestly deflected responsibility on the other ethnic groups in Pakistan who are ALL suffering in Balochistan due to the brutal subjugation of the Baloch National movement by Pakistan’s military establishment

2.         The “ethnic cleansing” argument completely falls apart under the weight of the evidence.  For starters, Malik Ishaq, leader of the Lashkar-e-Jhangvi is part of a growing series of terrorists released by the right-wing, Islamist Pro-ISI judiciary that include Hafiz Saeed (planner of Mumbai 26/11), Qari Saifullah Akhtar, Mullah Aziz ( of Red Mosque fame), Ajmal Pahari etc.  The Lashkar-e-Jhangvi took credit for the September 26th Massacre in Mastung and made its genocidal intentions very clear regarding Pakistani Shias.  One can listen to what the recently-released Malik Ishaq has to say about Shia muslims in general here.

Why are Amnesty International and HRW silent on this damning evidence. Why are they misleading the average leader by presenting the ongoing Shia genocide and diluting it by calling it “ethnic cleansing”??

3.            Based on the evidence above, how does HRW and Amnesty International reconcile itself with the ongoing massacre of Shia Pashtuns in Parachinar for resisting the Taliban. How does these “human rights” affiliates term the continual suicide attacks and target killings of Shias all over Punjab including D.G. Khan, Jhang, Lahore, Bhakkar and D.I. Khan.  What about the Ashura bomb blast in Karachi in 2009 that killed nearly a hundred Shias of all ethnic backgrounds in Pakistan.

The common denominator for these killings is that the victims are Shias – something that is very clear to the main perpetrators who have given their point of view in print. However, the obvious very clearly eludes our human rights champions who have confused both the victims (ethnic cleansing) and perpetrators (Lashkar-e-Jhangvi).

These reports ensure that no mention is made of both the Judiciary that has been releasing the terrorists inspite of damning evidence, the Punjab provincial government of PML N that is in a coalition with Lashkar-e-Jhangvi and the military, which actually transported Malik Ishaq in its own carrier to negotiate with fellow terrorists!!

What prevents these professional activists from stating the truth? Why have the omitted the most crucial details regarding the ongoing Shia genocide in Pakistan. Mustafa Qadri refers to these massacres as recent.  Is he really this naive?

In 2003 and 2004, there were two large scale massacres of Shia Hazaras.  In 2003, virulent Anti-Shia “fatwas” were distributed days before the massacre and we will be posting JPEGs of these fatwas shortly. These have been forwarded to us by Shia activists who have been keeping track of their genocide in Pakistan.  Similarly, in 2004 Lashkar-e-Jhangvi activists were found complicit in the Ashura massacre of Shia Hazaras.  On the most holiest day in the Shia Muslim calendar, over a 100 Shia Hazaras were gunned down with bullets inscribed with Anti-Shia hate literature. So much for the dishonest “ethnic cleansing” theory!

In the time taken to coordinate the block, ban and censure of social media activists who disagree with them, Ali Dayan Hasan and his “activist” supporters could have done their research on google to discover the mendacity of their statements and reports.  However, such an act would imply that they are actually concerned about the precarious plight of the 36 million Shia muslims of Pakistan and not just concerned about guarding their financial turfs and their social camaraderie with ISI-mouthpieces posing as journalists.

By suppressing genuine concerns through misinformation, are they acting as enablers?

When they ask the “authorities” to tackle these killings, are they being cheeky??

It is the State itself, as represented by the dominant GHQ-ISI that is complicit in these killings, while the elected government is increasingly powerless and itself a victim of the very same terrorists!

If these human rights activists have constraints, they should resign from their posts immediately instead of misusing it to lie to the public about the continual massacres of the Shia Muslims by the Jihadi auxiliaries of GHQ-ISI. By perpetuating their mendacity, they are complicit in the Shia massacres by the Deep State.

Mustafa_Qadri Mustafa Qadri
Increased attacks on Shia and in particular Hazara Shi’a, who are mostly Afghan refugees, demonstrate the increasing marginalization both groups face in Pakistan.