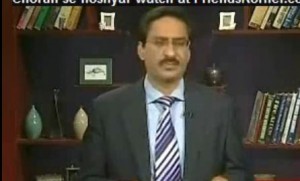 Editor’s Note:  The article by a Hazara activist doctor is a good exposure of bigots like Javed Chaudhary.  Javed allegedly writes for a Jihadist publication under a pen name and his anti-Shia bigotry as exposed in this article comes as no surprise.  However, we disagree with Mr. Saleem Javed when he portrays the ongoing genocide of the Hazaras as simply ethnic cleansing.  Shias are being massacred all over Pakistan and even in the case of the Hazaras, the perpetrator, Lashkar-e-Jhangvi has made it perfectly clear that it is killing the peaceful and law-abidding Hazaras on the basis of their Shia muslim belief  and NOT on the basis of their ethnicity. It is our considered view that state-sponsored Shia genocide in Pakistan must not be misrepresented as “Sunni-Shia sectarian violence” or “ethnic target killing” of a particular ethnic group.

The same LeJ is part of a nexus of extremist Deobandi Taliban-Al Qaeeda affiliates that is not only killing Shia muslims of all ethnicities  but also Ahmadi muslims, Brehlvi and moderate Deobandi muslims as well as persecuting Pakistan’s Christain, Hindu and Sikh communities.  Terming the ongoing genocide of the Hazaras as ethnic cleansing dilutes the issue and separates it from the larger Shia genocide that is going on in Pakistan.

The targeted killing of Hazaras has continued for last 12 years. It has not only been ignored by successive governments and security officials but by the very ‘Ghairat-mand’ and patriotic people of Pakistan who take to the streets in millions to protest against the drone strikes that kill Taliban and Al Qaeeda terrorists but never give a damn about the ongoing Hazara genocide.

This biased attitude is unfortunately shown towards a community whose children grow up with an ambition to join Pak Army and defend “the Land of the Pure”. From Yazdan Khan aka ‘Sher e Kashmir’, to General Musa Khan Hazara (Hilal e Jura’t) who lead 1965 war against India; to Maj. M. Ali & Capt. Zulfiqar (martyrs of 1998 Kargil War)…all belong to this helpless community which has been shamelessly ignored by almost all the Pakistanis.

After 12 years of being target killed and massacred, most of the members of Hazara community would not expect Pak establishment (for certain reasons) and most politicians (number game) to at least express some solidarity with the families and victims of such heinous act of terrorism. Nonetheless, they have been absolutely looking forward to receiving some words of sympathy from civil society and self-proclaimed free private media. To their surprise, the aforementioned institutions have either deliberately overlooked the tragedy or have been threatened to remain silent. Exceptions are always there, to be noted!

Whenever there is an attack on Hazara community, their members stage peaceful protest rallies in different parts of the country to let their voices be heard. Although tens of media personnel can be seen filming and photographing their demonstrations but almost none would broadcast whatever was recorded.

It’s quite understandable that in countries likePakistanthe hands of the media are tied plus the fact that corporate media drafts its censorship policy in terms of viewership readership in the best economical interest of its company. Thus, no sincere and professional journalism should be expected from the corporate media purposed to do business.

To be brief, in the latest incident of terrorist attack on Tuesday Oct 14 in Akhtarabad,Quetta, where at least 14 innocent Hazara vegetable vendors were brutally murdered, I witnessed a number of media personnel belonging to various TV channels covering the incident from the very beginning to the very last moment of funeral and burial ceremonies.

Seeing all this, it was definitely expected that an enormous amount of coverage and a number of talk shows will be dedicated to the tragic incident to express some solidarity with the Hazara community in general and the families of the victims, in particular.

To everybody’s surprise, the Hazara community was shamelessly blamed, targeted and insulted by a TV talk-show host–a bigot who happens to look quite tidy, sanctimonius and patriotic.  He was none other than Javed Chaudhary who furiously expressed his hatred towards the Hazara Shia ethnic minority by making an absolutely false allegation against them that they set the same bus on fire which was driven to BMC Hospital carrying dead bodies and those injured by its courageous driver who could have escaped earlier without getting hurt.

Javed Chaudary on his show, Kal Tak, keeps patronizing and symbolizing the driver as a hero while hurling abuses at the Hazara community:

The Hazara community would have wholeheartedly thanked and admired the driver given he had really driven the bus to BMC hospital. But the fact is that he had escaped as soon as the assailants were done. The bus that Javed Chaudary is talking about was driven to hospital by a police officer which was proudly claimed by the Deputy Inspector General of Police (Operations), Hamid Shakeel while talking to Geo News.

Meanwhile, the readers are requested to give a deeper thought on Javed Chaudary’s remark: ‘It was the same bus which had all the evidence against the terrorists in it’. Now you tell me, who benefits from burning the bus? The Hazaras? Absolutely not!

Even if it had the evidence, there was a similar on Hazaras in Mastung just a week ago, what has come out of the evidence? It is a campaign of ethnic cleansing since the last 12 years, tens of attacks were carried, but not a single culprit has been punished. LeJ terrorists Usman Saifullah and Dawood Badini had escaped from an Anti-Terrorist Force jail in Quetta Cantt. And Javed Chauhdary is talking about evidence in a bus!

For Chaudary’s info, the Hazaras of Quetta have gained enough experience in last 12 years to value such evidence. Only the naïve would believe in your propaganda to defame the targeted community. The fact is that the Hazara community has been peaceful and constructive is clearer than sky. Were it not for the community’s maturity,Quettawould have turned into another Swat or Parachinar years ago.

Further more, Chaudary Saheb uses the term ‘Jan ba Haq’–which is usually used for a non-Muslim dead–for the martyrs of Akhtarabad incident which obviously shows his intention behind such flagitious show. He calls the imaginary driver ‘a hero’ and ‘a Benefactor of Hazara community’ and asks ‘Tamgha-e-Shuja’at’ for him while speaking out all his hatred against the Hazaras. No mention of what happened to the innocent lives!! Nothing about the poor families, who lost their breadwinners.

Last but not the least, there are also journalists who buy all the dangers to listen to the plight of Hazara community and echo their voice. Sophia Jamal, Nusrat Javed, Mushtaq Minhas and Najam Sethi are prominent among those who deserve a salute.

The author is a doctor, and social media activist. He tweets at @mSaleemJaved