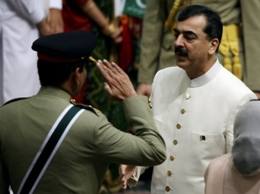 Recent arbitration by the Saudi intelligence agency in the ongoing ‘CIA-ISI war’ is yet another proof that Pakistan is in a dangerous mess created by the military’s illegitimate control over the country’s foreign policy.

Before it is too late, Pakistan needs a radical change in terms of reorganizing  internal power centers. Adventurous generals must be reined in and should be no longer be allowed to impose their outdated foreign policy perceptions. As a significant stakeholder, the military can give advice on foreign policy issues but it must not solely shape or dictate the contours of Pakistan’s foreign policy.

A country’s foreign policy is formulated not on the basis of paranoia and true or false security concerns. Trade and economic interests are corner stones of a successful foreign policy. A country can’t change her neighbors; it has to live with them. A country which can’t establish friendly or at least working relationship with its neighbors is not considered credible by the international community.

Pakistan is seen as an unreliable state because its generals, not politicians; control the country’s foreign policy. The time has come that for the survival of Pakistan, and to restore its own credibility the military restrain from meddling in the foreign policy.

The majority of Pakistanis are not against India but a few generals are. The people of Pakistan would like to have good relations with India but the military is opposed to the public will. At the same time under the Saudi and American pressure the military has blocked bridge building efforts between Iran and Pakistan. This attitude of the men in uniform has been hurting Pakistan.

The military cannot continue treating the rest of Pakistanis as ‘bloody civilians’ or a heard of sheep. Pakistan needs an army that serves the people of Pakistan, an army that follows law of the land and submits to the writ of an elected representative government. Foreign policy ought to be formulated by the elected civilian government in consultation with properly trained specialists, professionals, academia and other stakeholders.

For the last 65 year, the people and all institutions in Pakistan have been hostages at the hands of their own military. In the past generals and commanders considered Pakistan as their personal state. Indeed because of generals’ horrific blunders lives of millions of Pakistanis have been at risk.

Professionally incompetent generals, many of whom were also corrupt and morally bankrupt, put their personal greed and ambitions above Pakistan. Today, the Pakistani society is a sick society due to paranoia and confusions created by a few generals.

The military’s civilian regiments such as the Jamat-e-Islami and other Jihadies have imposed false ideologies and concepts upon the people of Pakistan. Even today, a group of idiots defends those foolish and deadly policies on our television screens. As a consequence Pakistan’s faces a huge PR crisis.

The military has been involved in clandestine operations and deals and often the country’s civilian leadership is not informed. In fact an independent investigation would reveal that some in the Pakistan military have been pursuing criminal agendas at the cost of  Pakistan and its people.  Military coups and generals’ unlawful interference in foreign and domestic policies have harmed Pakistan. Some Pakistani generals think that only they know what is good for Pakistan. This selfish and foolish approach has almost destroyed Pakistan.

It is sad to observe that despite recent debacles no lessons have been learnt and there are no visible signs of change in the military mindset. Discussions and the tone at Corps Commanders’ meetings have not been appropriate. Corps Commanders act as an alternative Cabinet and generals present themselves as defective rulers of Pakistan. With military’s such behavior Pakistan will continue suffering humiliation after humiliation on the national and international fronts.

The current military leadership can turn the page.  General Ashfaq Parvez Kayani and his colleagues can change the culture of contempt that exists in the military ranks for the Parliament and the elected government. General Kayani will earn true respect and will leave a positive legacy behind if he could take the first step and teaches his fellow commanders that they have to bow to the will of the people and obey the law, not violate it. Half of the Pakistan’s troubles can end if some in its military stop operating above and beyond the law.