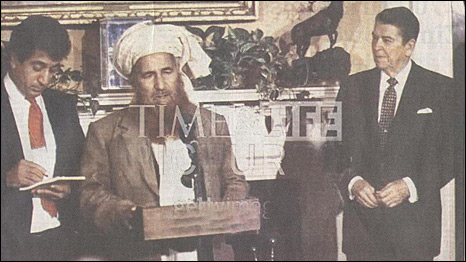 A fake picture purporting to show Jalaluddin Haqqani with US President Reagan in several Pakistani dailies recently was issued by Online news agency of Mohsin Baig. Online, along with several other media agencies and outlets, serves as a convenient tool for army/ISI’s propaganda.

Please refer to this article by BBC Urdu’s Rifatullah Aurakzai which explains that Haqqani never visited the US, and the Mujahideen Commander shown in this picture is Mawlawi Mohammad Yunus Khalis.

Mawlawi Mohammad Yunus Khalis (1919-2006) led a jihadi party called Hezb-i-Islami (“Party of Islam”), the same as Gulbuddin Hekmatyar’s party. The two were commonly differentiated as Hezb-e Islami Khalis and Hezb-i-Islami (Gulbuddin). He was a hardline fundamentalist, and wrote the 1991 treatise “An Appeal to Support the Holy War in the Sudan”. After the fall of the communist government in 1992, his forces controlled Nangarhar Province in eastern Afghanistan. Khalis participated in the Islamic Interim Government as a member of the Leadership Council (Shura-ye Qiyaadi), but held no other official post. Instead of moving to Kabul, he chose to remain in Nangarhar. His party controlled major parts of this politically and strategically important province. The Taliban brought Nangarhar under their control in September 1996 and Khalis was quietly supportive of the Taliban movement. After the fall of the Taliban, his supporters regained their stronghold in Jalalabad where Khalis exerted considerable influence. In 2001, the United States claimed that Khalis helped facilitate Osama bin Laden’s escape from Tora Bora. (Source)

Khalis held extremely sectarian views about Shia Muslims and Sufi Muslims. For example, Shia Hazara political parties of Afghanistan were excluded from the mujahideen alliances, largely because of rabidly anti-Shia prejudices held by some leaders, such as Abdur Rab Rasul Sayyaf and Yunus Khalis. This hatred of Shia Hazaras is also visible in the ongoing massacres of Shia Hazaras in Pakistan and Afghanistan by the Taliban and their affiliates namely Sipah-e-Sahaba, LeJ, Jundullah etc.

Here is a background reading on Mohsin Baig’s Online-International News Network: A news ‘agency’ you can trust!
https://lubpak.net/archives/32788

Many foreign journalists, unwittingly influenced by fake liberals as well as ISI’s propaganda are uncritically recycling the same set of lies. For example George Fulton writes in Express Tribune:

America easily forgets their own relationship with the Haqqani militants in the 1980s. It was during this period that links were first forged between the network, and the ISI and the CIA. Their leader, Maulvi Jalaluddin Haqqani, even shook hands with President Ronald Reagan at the White House. So America was happy to break bread with these people when it suited their strategic interests. The problem lies in that Pakistan and America’s strategic interest have now diverged.

“Well the picture circulating around is not of Haqqani in the White House, its Younis Khalis. How does it matter that 30 years ago Afghan dignitaries were present in the White House? There was no such thing as the Taliban then. The Mujaheddin were not the moral or ideological equivalence of the Taliban. Given how narratives are spun in Pakistan, the very fact that the Haqqanis were once coddled by the US should give us ample reason to go after them rather than to stake the entire nation for their sake. Why do we need non-state actors to maintain our interests in Afghanistan? Is the fact that almost all of Afghan trade passes through Pakistan not enough? Are our diplomats incompetent? Do we as a nation have nothing to offer Afghanistan that the Afghans will rush to India’s hand? Or do we all know secretly inside that most Afghans hate Pakistan and we have no choice but to manipulate Afghanistan like a colony, in the same manner that we condemn US for treating Pakistan? The White House has refused to “second” Mullens statement. The military hasnt declared war on anyone. The only one getting excited is the media who have dusted all their old “patriotic songs” (apparently because we are not patriotic without them) and TV pundits who would rather defy America than to pay some attention to the many millions flood victims in the country.”

The article is problematic in other areas as well when it states the following:

The Pakistan military/intelligence nexus is merely planning for a post-US Afghanistan — a scenario that could be all too imminent. This is where Pakistan’s insecurity lies. Not without foundation. They don’t want a repeat of 1989. Instead, they want to have control and influence over an independent Afghanistan — hence the support for the Haqqani militants. This is not just for the old chestnut of ‘strategic depth’. Instead, they are particularly terrified that any ensuing vacuum after the pullout of Nato and American forces will allow India to gain influence within Afghanistan. They want to control Kabul before the Indians do. It is this very thought, above all else — the idea of having India effectively on both of Pakistan’s flanks — that has ensured the ISI carries out such duplicity, even at the detriment of Pakistan’s relationship with America. If America wants Pakistan to truly give up its links with the Haqqani network they need to understand this legitimate, even if ever so slightly paranoid, fear. And having done so, they should provide Pakistan with the necessary assurances and alternative solutions to allow Pakistan to give up their ‘veritable arm’.

Once again, the author makes a serious error when he presents the cancerous India-Centric or rather India-Obsessive foreign policy view of Pakistan’s military establishment without the counter arguements and narratives.  Granting legitimacy to this noxious elite foreign policy view , all the reader is left with is to accept the “understanding the deception” point of view.  For instance, George  fails to highight how atleast four elected governments since the 1990’s have been derailed and/or dismissed by the military establishment for not tagging along in supporting Jihadi militants as an instrument of State policy.   In 1989, Benazir wanted no interference in Afghanistan and peace with India. She was labelled a security risk and dumped.  In 1999, Nawaz Sharif’s peace overtures were scuttled Post-Kargil and the rest is history.

Since 2007, the PPP-Government and President Zardari have tried their best to advocate peace and trade with India and Afghanistan to the extant of offering transit routes to India into Afghanistan.  The Kerry-Lugar Bill for which the PPP government had to pay dearly was yet another mechanism to end the usage of violent Jihadi militants as an instrument of State policy.  The Mumbai attacks after another landmark peace initiative by President Zardari (No First Strike Policy) were a severe blow to this counter arguement.  The list could go on but it is sad to see foreign journalists buying into the dubious India-centric narratives of the military establishment.

A civilian-lead Pakistan faces no risks, just economic bonanzas for our country from a peaceful relationship with India and Afghanistan. It is ideally located to offer lucrative trade routes to the world into Afghanistan and the national economy stands to gain billions in custom revenues and transport into Afghanistan.  However, such initiatives would seriously hurt the “Strategic Depth” mantra of the military establishment and their props like Imran Khan who want to scuttle NATO supplies going into Pakistan and whose business interests (NLC, Varaan ofGen. Hamid Gul) would be affected if the policy of supporting the Taliban is ended.

There is absolutely nothing good in this “legitimate” concern of the military establishment.  Just a dangerous assumption that has been pampered and recycled without much questioning by those who are tasked to do the opposite.