On BBC’s Secret Pakistan and Ejaz Haider: Their denials and propagandists – by Abbas Daiyar

A comment on Bruce Riedel’s proposed accountability of Pakistan army

The world may help Pakistan through United Nations Monitoring, Verification and Inspection Commission on Pakistan (UNMOVICP)

Dear patriot Pakistanis (ignore if you are a liberal fascist, or a Qadiani, Shia, Baloch, Hindu etc)

Kindly refer to this post which suggests travel restrictions on all senior officers of Pak Fauj, all patriotic Pakistanis, here and abroad must oppose this gross human rights violations of our beloved armed forces. Thanks to Allah for these soldiers of Allah.

“Given the ongoing patronage of jihadi and sectarian networks by Pakistan army and its various agencies (ISI, MI etc), particularly in view of the discovery of Osama bin Laden right in the heart of Pakistan army complex in Abbottabad and the recent evidence reconfirming ISI’s involvement in attacks on Afghan and NATO officials in Afghanistan, also in the light of the ongoing massacres of the Baloch, Pashtun and Shia Muslims by Pakistan army and its various proxy groups, we the people of Pakistan, Afghanistan and diaspora living in the US, Canada, Europe and other countries appeal to the United Nations, USA and European governments to take a step further and impose stringent restrictions not on the people of Pakistan or the civilian government but on senior officers of Pakistan army (Major Generals and above).” Appeal to international community: Impose travel restrictions on all senior officers of Pakistan army

I appeal to Amnesty International, HRW and HRCP to come to the aid of Pakistan army and I am confident that they will.  In the last few days, this RAW-Mossad sponsored blog, which publishes articles talking of peace between Pakistan and Israel, has been critical of Pakistan’s patriotic human rights activists like Ali Dayan and Mustafa Qadri. These are the brave individuals who stood up to criticism on Twitter by banning those who critisized them.

In Pakistan, there are are two types of human rights activists. One category belongs to those like Mustafa Qadri and Ali Dayan who are true patriots who expose the Qadiani and Rafzi agenda in Pakistan. The other dominant category of sham human rights activists belongs to the agents of RAW-Mossad-CIA who bad-mouth the army and patriotic civil society and dishonestly present the perpetrators of violence, the Rafzis and Qadianis as the victims without any evidence!

One must give Dayan and Qadri credit when the latest report on Rafizi atrocities against the Taliban at least tried to highlight the point of view of the oppressed, victimized and brutalized Taliban.   While both these fine gentlemen could not come out openly and talk about the massacre of thousands of peaceful Taliban anti-imperialist resistance fighters by the brutal Shia militias in Quetta and Kurram, atleast they had the deceny to present this as an equal sectarian conflict between Shia militants and Muslim defenders even if all the violence is one generally one-sided and against the peaceful, tolerant and compassionate Taliban and Lashkar-e-Jhangvi. Another true patriot, Ejaz Haider also highlighted the dangers of the Rafizi fifth columnists and their tendency to stoke sectarian conflict.

Previously, it seemed to me that the liberal fascists had completely taken over the State of Pakistan but now I am beginning to see a sliver of hope. With the continuing support of  true patriots like Ali Dayan, Mustafa Qadri, Ejaz Haider, Moeed Yusuf, Ansar Abbasi, Talat Hussain, Nasim Zehra, Najam Sethi, Fatima Bhutto, Malik Ishaq, the Pakistan Fauj has a slight chance of overthrowing the brutal Zardari dictatorship and installing an Islamo-theo-demo-Caliphato Riba-free welfare State in Pakistan under Hazrat Imran Khan – modelling Iran and Saudi Arabia.

I request Ali Dayan Hasan and Mustafa Qadri to highlight this latest human rights violation of the Pakistan army by liberal fascists.

Just because the Pakistan army is allied with the anti-imperialist Taliban does not mean that it does not have the right to relax on their foreign properties in the West. Just because the Taliban wants to destroy Western civilization does not mean that their supporters and spokespeople should not be allowed to reside in the West and visit it whenever they want.  Look at my own example.  Just because I am being published by the Zionist Pakistan Blogzine (which should really be named Israel blogzine) does not mean that I don’t have the right to undermine them in public. Hazrat Zakir Naik has said words to the effect that Muslims have the right to preach in the West but the West has no right to preach on Muslim lands. Ziono-Christains (who hide behind the tag of rationalists) will call this double standards but my brothers and sisters, this is the essence of Tableegh!

I am fully confident that Ali Dayan (HRW) and Mustafa Qadri (Amnesty) will step up to the plate to defend the Pakistan Fauj, once again, from these Zionist imperialist tactics of travel bans.  Just like they stepped up to protect the pious Lashkar-e-Jhangvi when Zionist organizations and even some Pakistani newspapers presented them as villians while presenting the Shias as victims.

I am Riaz Malik and I fully support Ali Dayan and Mustafa Qadri against the liberal fascists, the Rafzis, the Hazaras, the Toori Pashtuns, the Saraikis of D.I.Khan and the sub-human Twitter terrorist computer programs. Please distribute this message as widely as possible and I have no objections if you post and publish this.  Some may call this self-serving narcissism but those people are the same ones who will critisize Najam Sethi and Ansar Abbasi. 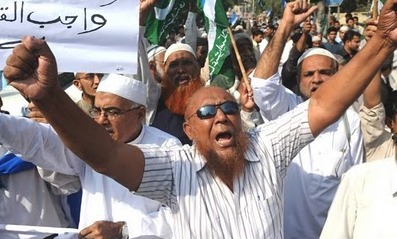 Links to Hajjaji’s pearls of wisdom: