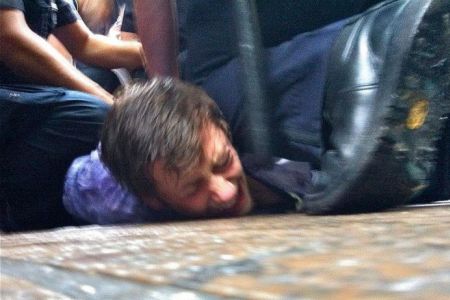 With its brutal and bloody crackdown on the peaceful demonstrators of the “Occupy Wall Street” movement, the New York police demonstrated that the United States doesn’t deserve to call itself a “beacon of freedom” and cradle of democracy anymore.

“Occupy Wall Street” is a grassroots movement which aims at protesting and challenging the increasing social and economic inequality and political intolerance in the United States. The movement describes itself as a “leaderless resistance movement with people of many colors, genders and political persuasions.” The organizers of the movement say that the only thing which they have in common is that they constitute the 99% that will no longer tolerate the greed and corruption of the 1%. Journalists, political activists and citizens are the members of this popular movement, which has gained momentum after its advertisement was first published in July.

Now “Occupy Wall Street” is a member of the national network of political activists who are stepping up efforts to organize protests and demonstrations against the US government ahead of the upcoming November 2012 presidential elections. They are allied with the “US Day of Rage” movement, which is planning nationwide protests before the presidential elections. Their motto is “One citizen, One dollar, One vote” and their manifesto clearly indicates their dissatisfaction with the social, economic and political status of the country. They believe that certain interest groups and lobbies are running the United States and it’s not the will and power of the people which prevails.

“Bought by hard and soft dollars, disloyal, incompetent, and wasteful special interests have usurped our nation’s civil and military power, spawning a host of threats to liberty and our national security,” their manifesto reads.

“Corporations, even those owned by foreign shareholders, use money to act as the voices of millions, while individual citizens, the legitimate voters, are silenced and demoralized by the farce,” the manifesto adds.

The recent demonstrations and protests by the members of “Occupy Wall Street” was responded with the brutality and atrocity of the Manhattan police, which is said to have arrested some 100 people so far and injured many of them. According to New York Daily News, on September 24, “Hundreds of people carrying banners and chanting “shame, shame” walked between Zuccotti Park, near Wall St., and Union Square calling for changes to a financial system they say unjustly benefits the rich and harms the poor.”

New York Times has released an amateur footage, which shows that the police forces have hit several protesters with pepper spray near the 12th St. and Fifth Ave. and injured many others using batons and sticks. According to NY Daily News, witnesses who were present at the scene of conflict have said that “they saw three stunned women collapse on the ground, screaming after they were sprayed in the face.”

“I saw a girl get slammed on the ground. I turned around and started screaming,” said Chelsea Elliott, 25, from Greenpoint, Brooklyn, who said she was sprayed. “I turned around and a cop was coming … we were on the sidewalk and we weren’t doing anything illegal.”

The New York police said that the protesters hadn’t requested a formal permit for staging a demonstration and their rally has been illegal. Ironically, these statements were made by the authorities of a country, which conventionally intervenes in the internal affairs of other countries and accuses them of denying the civil liberties and rights of their citizens.

Interestingly, Yahoo as one of the most prominent providers of internet services in the United States has blocked the access of its users to the emails which contained information regarding the rallies and demonstrations of the Occupy Wall Street group. It has also prevented the organizers from sending emails about the date and time of the rallies. Although Yahoo has officially apologized and put the blame on an external spam filter, it was clearly evident that the blockage has been a predetermined and state-sanctioned move.

Aside from the government’s mismanagement of the economy, growing inequality between the social classes and restricted political freedoms, one of the grievances of the protesters taking part in the rallies of Occupy Wall Street was the controversial execution of the 42-year-old black American, Troy Davis, who was convicted of killing a police officer 22 years ago and executed through lethal injection on September 21, 2011.

New York mayor Michael Bloomberg has boastfully and of course pretentiously defended the protesters and said that the New York citizens have a right to demonstrate and protest and this is “what makes New York New York.” He, however, might have been unaware of the brutal clampdown of the police on the protesters and especially the reporters who have been trying to take films of the altercation.

One of the members of the Occupy Wall Street, Marissa Holmes, was detained by the NY police for filming the arrests. The mainstream media in the US and the European countries have tried their best to cover up the police brutality; however, independent and alternative news outlets and blogs have published elaborate reports on what’s going on in the streets of New York.

In an article published by OpEdNews.com, Mark Adams has discussed the root causes of the anger of the Americans who have taken to the streets of New York these days. He has noted that fraud and bribery in the banking system of the United States has turned the people frustrated. According to Adams, the media are trying to conceal the crimes of corrupt figures in the US economy, but at the end of the day, reality cannot be withheld from the people, “The banksters have committed fraud in loan origination, securitization, servicing, and foreclosure to steal the homes of millions of Americans… Unfortunately, the banksters’ looting spree is not over. They are in the process of stealing millions more Americans’ homes right now.”

Anyway, with its cruel suppression of the peaceful demonstrators and crackdown on its own citizens who are dissatisfied with the government’s handling of the economy and society, the United States showed that the “beacon of freedom” has been turned off for so long.

This is not a carrot – by Nadeem F. Paracha
Tibetans in Baltistan – by Salman Rashid