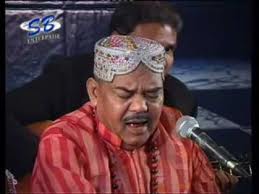 LUBP authors and affiliates are saddened to report the passing away of Pakistan’s legendary qawal Maqbool Sabri.  Qawalli (Sufi devotional music) is at the heart of Pakistan’s diverse cultures.  Before the onslaught of the Taliban and their like minded copies, thanks to the policies of Pakistan’s military dictators and their civilian collaborators, it was the culture of the saints that allowed Pakistan’s diverse ethnic, sectarian and religious groups to get along.

On Thursday evenings Pakistan’s Muslims and Hindus, atheists and agnostics flocked to the shrines of the Saints to appreciate qawals like the late Sabri Brothers and Nusrat Fateh Ali Khan.  Here, they found spiritual solace, peace and a true connection to the soul of South Asia.  Qawwali is generally held in disdain by much of Pakistan’s urban upper-middle classes/bourgeoisie as it offends their extremist Salafi-Elitest sensitivities.  Furthermore, those who flock to shrines are also the ones who flock to mass populist parties during the brief democratic interims in Pakistan; another reason why Pakistan’s anti-democracy urban elites are wary of Qawwali culture.

Even after repeated deadly suicide attacks on Sufi Shrines and the further radicalization of Pakistan’s Taliban-apologist urban bourgeoisie, Qawwali still thrives in Pakistan.  While Maqbool Sabri has passed away today, his music will live on forever. Here is a youtube clip of the immortal Bhar Do Jholi Meri Ya Muhammad that was a trademark qawwali anthem of the great Sabri Brothers:

and here is Hum Panjetani Hain:

Here is short bio for Ustad Maqbool Sabri, a true Qawwali giant of his times:

Maqbool Ahmed Sabri (born October 12, 1941 in Kalyana, East Punjab ) Maqbool Sabri is one of the late Sabri Brothers, the well known exponents of the Qawwali style of folk singing popular in the northern parts of the Indian subcontinent.

He learnt music from his father, Ustad Inayat Sen Sabri. He was trained in Qawwali and North Indian classical music. His first public performance was at the annual Urs festival of Hazrat Peer Mubarak Shah in Kalyana in 1946. The family moved from India to Karachi, Pakistan following the Partition of India in 1947. Maqbool furthered his knowledge of music under Ustad Fatehdin Khan, Ustad Ramzan Khan, and Ustad Latafat Hussein Khan Rampuri. With the help of his father, Maqbool formed a Qawwali group at the age of eleven. Soon afterwards, Ghulam Farid, who was then performing with Ustad Kallan Khan’s Qawwali party, joined him and became the leader of the party, which soon came to be known as Sabri Brothers.

Click here to post a comment
Pakistani Shias, rights activists reject HRCP’s statement on Shia killings in Pakistan
Of False Prophets and their recipe for Disaster (Part I) – by Rusty Walker