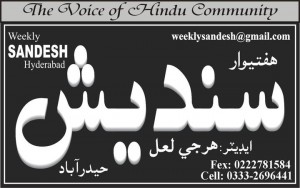 On your next visit to southern Pakistan, look up Harji Lal. Lal is a man with a vision, with a mission, and with a desktop PC on his shoulder. Once a week, Lal cleans and jerks his bulky computer, nestles the tower in next to his ear, and lugs the unwieldy machine from his rural Hindu community into the bustling city and the nearest prep shop.

The antiquated computer contains all the text and visual assets for theWeekly Sandesh, Pakistan’s first, and so far only, Hindu newspaper.

As important as the paper is to southern Pakistan’s Hindu minority (Hindus make up 5 to 6 percent of the majority Muslim population), theSandesh is actually Harji Lal’s avocation. His main occupation is as a bootblack. After countless afterwork evenings in cafes poring over Muslim newspapers, the father of six decided that Hindus living in the Sindh province needed their own news source.

Lal promptly, over the course of eight to 10 years, taught himself how to use a computer (his PC is one of only two in the neighborhood) and mastered an archaic set of publishing tools. He prints, cuts and tapes the proof. He hefts weighty rolls of paper and carries them to a local printer. He sorts and folds the weekly editions as they come off the press. He maintains a Facebook page. The paper is sold at a price the impoverished populace can afford, which means there are weeks when Lal sinks half his shoe-shine salary into the press run, and his family skimps on meals.

The reason Harji Lal does all this is basic, to him: Sandesh means “message.” And the message of the Weekly Sandesh is “peace, love and tolerance.”

Thanks to BoingBoing for the tip.

A technical note: TIME’s video player crops out all the subtitles, play it full screen so you can read them (unless you’re an Urdfu speaker, in which case you won’t need them) 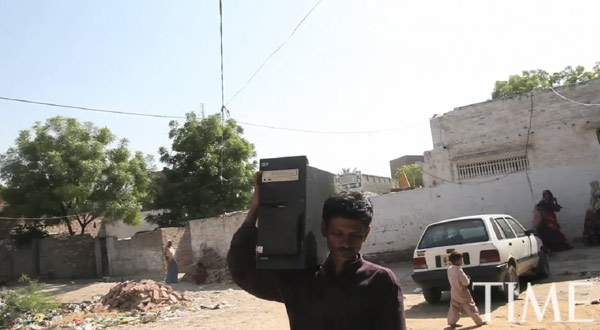