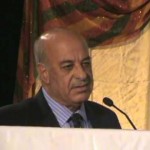 Looking at the unfolding situation vis-a-vis the Afghanistan-Pakistanimbroglio; watching with trepidation bordering on fear, the ‘perceptions’ of the ‘foreign policy elite’ and therefore of the Establishment of this luckless country (not, God forbid, to be confused with the elected government); and having some little idea of what goes on in the great minds of our brilliant Rommels and Guderians one can safely say that our country, indeed our region, is in for a time of greater tribulation and more strife. For, if they have their way, everything is going to be, as our NCO and JCO instructors at the PMA used to say, “Aj you were” (Well, ‘As you were’ actually, but that is how they said it).

This word of command was shouted when you did not execute a drill movement right smartly, and had to do it all over again. What was very amusing, however, was when our JCO/NCO instructors, teaching the theory of, say, the functioning of the gas-port on a semi-automatic rifle went wrong on some datail, and would say to themselves “Aj you were”! And then start the lesson again. I can almost hear our Deep State say out loud, “Aj you were” as the American withdrawal nears.

But, whilst our JCO and NCO instructors would restart the lesson after the ‘Aj you were’, what pray will our tin-hats ‘Aj you were’ us to? The destruction of Kabul one more time at the hands of the likes of Haqqani, Hekmatyar and Co., not forgetting the ferocious Taliban?

Seriously, considering the storm of criticism on what this country’s‘Foreign Policy Elite’ had to say in the report “Pakistan, the United States and the Endgame in Afghanistan” jointly prepared by the Jinnah Institute (JI), in Pakistan, and the United States Institute for Peace (USIP) we must look at some aspects of it this week. Since we are talking army language, let us see what it says on the Afghan National Security Forces (ANSF).

“Pakistani policy elite remain wary of the future role of the ANSF. Participants perceived the bloated size of the Afghan National Army (ANA) to be unsustainable and a threat to Pakistan’s interests. In terms of ANA’s ethnic composition, the presence of non-Pashtun officers in key positions was highlighted to suggest that the makeup is more likely to fuel ethnic hostility than to maintain peace in Afghanistan.”

What the size of Afghanistan’s very new, very nascent army, or its ethnic make-up has to do with us Pakistanis escapes me most completely. Unless, of course the ‘elites’ think Afghanistan is Pakistan’s fief. Have the Afghans e.g., complained about our half-million man army? Have they complained to the world about our not one, not two, but many bums and the missiles to deliver them? Have they objected to the preponderance of Punjabi officers and other ranks in Pakistan’s armed forces?

Here is a jewel: “Even though the ethnic Pashtun ties at the people-to-people level have remained strong, Pakistani experts and political leaders we talked to were acutely aware of the fact that their country is widely reviled and mistrusted in Kabul while countries like India are viewed positively. Some policy elite however argued that the anti-Pakistan sentiment is confined to the northern, non-Pashtun parts of Afghanistan and that the international media has been unnecessarily hyper-sensitive to this concern.”

So then, the international media has been ‘unnecessarily hyper-sensitive’ about anti-Pakistani sentiment in the non-Pashtun areas, eh? Well, I should have thought that given Afghanistan’s critical importance, we Pakistanis should have been more than ‘hyper-sensitive’ to Afghan feelings than the foreign media. As to Pakistan’s popularity in the rest of Afghanistan, one of the great experts on that country and who was part of the ‘foreign policy elites’, told me at a peace conference in Kabul, not more than a year ago, that to tell the truth the Afghan Pashtuns hated us (official Pakistanis) almost as much as the non-Pashtun Afghans did! Will we never get real, my friends? Will we always defer to the false, destructive narratives of the Deep State?

The stupidity does not end there … here is a pearl: “Between now and 2014, Islamabad’s positioning in the Afghan reconciliation efforts will be dictated by the country’s security establishment.” Ah so! ‘Between now and 2014’? The security establishment has not run the Afghan Cell in the FO for decades now? For the ‘elites’ to ignore the role of the security establishment in ‘Afghan Policy’ over the past disastrous decades is disingenuous to say the least, for some of them were important players in government and should have known perfectly well just who was pulling their strings. Some of the ‘elite’ have taken umbrage at the critics not duly acknowledging or even knowing what their stance was when such destructive policies were being put into practice on their watch. The question is, did anyone resign a cushy posting, lodge a protest or even write a dissenting note? Let us hear it. For what happens in the near future is going to be a matter of life and death for our country.

The most priceless, of course: “And despite the criticism of a security-centric approach, there is a firm belief among the policy elite that Pakistan has strong interests and concerns in Afghanistan which the international community — read the United States — has often ignored over the past decade.” I see: the United States that has been brought to the brink of failure in Afghanistan due mainly to the terrorists of the Taliban and the Haqqani Group being provided shelter and sanctuary in Pakistan should have been more sensitive to Pakistan’s “strong interests and concerns in Afghanistan”? The hypocrisy and the grandstanding is breathtaking to say the least.

And we have not yet factored in Osama bin Laden’s presence in Abbottabad Cantonment; nor the Quetta Shura’s in Quetta Cantonment. And yet the Americans must pull our Deep State’s chestnuts out of the fire? By golly, the arrogance is astonishing.

Doctor:
What a brilliant article. Finally someone who is part of the elite who is willing to call out our folly of strategic depth. The Afghans regardless of ethnicity hate Pakistan for our meddling in their affairs and the ruin we have caused to their nation.
We have to get out of our false victim syndrome and clean our own house.

Nadir:
We are a nation obsessed with foreign interference and get all riled up when any “foreign actor” interferes in our affairs. However, somehow our foreign policy elite believe that doing the same to Afghanistan is just and that the Afghan people are somehow happy with this interference. Unfortunatley for all of us, since our security establishment is hell bent on treating Afghanistan as our colony, in ten years time this same article will still be relevant.

White Russian:
This cynical “foreign policy elite” builds its case over made up grounds. Just other day, a member of this elite Ejaz Haider, in these pages, tried to teach us commoners the fine difference between ‘doable’ and ‘desirable’. Thank you very much Dr Goebbels! What Mr. Haider failed to mention was that things ‘desirable’ were rendered ‘not doable’ by a murderous duplicity of his Khaki masters.
This “not doable” magic was achieved by giving sanctuaries to the terrorists which ruthlessly slaughtered us (the commoners) on both sides of Durand Line, in bazars, mosques, funerals, sports events, everywhere. But at leas US and NATO were successfully brought to the brink of defeat. Never mind the lives of thousands of innocent Pakistanis and Afghans, which are the fodder anyway for the strategic and other hellish depths of this shameless gang audaciously calling itself “foreign policy elite”.
As a person who has to live with the fear of nearby lurking suicide bomber, I do not care which of the 53 members of this elite said what on which page of their sophistry master-piece.