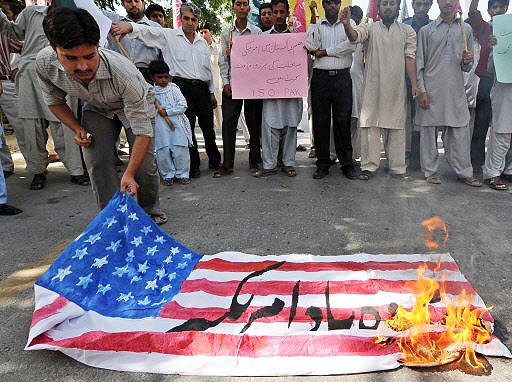 Let us assume that some American writers such as Rusty Walker are sincere in their desire to build bridges between Pakistan and the United States. It is a noble cause and Mr. Walker should be admired for his wish to clear the air of negativity and misunderstandings. However, could there be real bridges built between masters and slaves? Bridges are built when both sides truly accept and respect each other.

Justice, fairness and honesty are key elements of a healthy relationship but relations among nations and countries are based on interests, not just good wishes. Mr. Walker would not be writing about building bridges with Pakistan if his country did not have significant strategic interests in Pakistan.

The fact is that the United States has interfered violently in Afghanistan, Pakistan and the Middle East and deprived the region of its resources. The U.S interference came at the cost of freedom and social and economic development of the region.

The question is: Have the U.S strategic plans for the region changed? Has the United States stopped military means to pursue her interests? Has the U.S given up its hegemonic designs? Answer to these questions is; No.

In reality as a client state, since the 1960s Pakistan has been facing disastrous consequences of its partnership with the United States.

Ironically, Western politicians, policy makers and the media are now accusing Pakistan of all troubles. Islamophobia is in full swing in the West and Pakistan and Muslim bashing is common. Some Western writers and think tanks portray Pakistan as a failed state and it seems that Pakistan is a target of a well thought through campaign in which it is attacked from several sides. This is the context of anti-Americanism in Pakistan and in the wider Muslim world, which surprises Mr. Walker. But at the same time, in his piece for the LUBP, Mr. Walker shrugs off the real causes of this resentment and even publishes the following blame list.

“Building bridges is not easy in an environment where your allies hide Khalid Shaikh Mohammed, and Mullah Omar, and put up bin Laden in a garrison town, and expect us not to send in drones; ignore Taliban terrorizing tribal populations in FATA.”

A man who wants to build bridges justifies drone attacks! Drones are one of the most horrific war technologies that have turned human death and destruction into mare computer games. Drones have taken the killing business to a new level of indifference and brutality. American technicians sitting at remote locations kill other humans without knowing them and how their victims suffered death.

A person who loves, respects and values human life should never support killing of other humans in such a cruel and cold way. But the Pentagon continues to invest in drone technology to produce more dreadful and deadly weapons. It is not about the Taliban and Pakistan only, development of such deadly technologies and killing toys raises ethical questions because drones will be used against helpless people or anyone who would dare to challenge U.S hegemony or Israeli aggression.

Mr. Walker has accused Pakistan of harbouring the Taliban without even giving a reference that the Taliban project had the backing of the U.S and its allies Britain, Saudi Arabia and the UAE. Without saying that the U.S government was courting the Taliban for a U.S funded oil pipeline through Afghanistan.

Mr. Walker mentions judicial murder of Z.A Bhutto completely ignoring the fact that the elimination of Bhutto was part of a U.S plan. Before the U.S backed coup d’état in Pakistan in 1977, Bhutto had publically said that the U.S was after his life. Objective investigation into the death of Benazir Bhutto would also reveal an international link to her killing in 2007 because Benazir was aware of the hidden agenda behind the so-called war on terror.

Pakistan is facing a U.S led Psychological Warfare but let us talk about people to people contacts between Pakistan and the United States that Mr. Walker aims to promote. Here again Mr. Walker sets the agenda and preconditions for Pakistan: “Progressive Citizens for Secular Democracy-Pakistan, United Secular Army.”

The US soldiers are taught to fight against ‘evil’ as they are force of ‘goodness’. The very agenda of the U.S Army is driven by religion.The Church of England subtly influences British politics. And faith divides U.S society where fundamentalist Christians have bigger say, Tea Party movement is just an example.

Western civilization has been a blessing for the most in the West and it has been a curse for the most in the non-Western world. In the Roman Empire, violence was a way of life in Europe. In the medieval Europe the Church used to burn people on the stake and the Bible was kept in chains. Western political thinkers, philosophers and artists reacted to the brutality of the Church and people revolted against the Church and the Crown and the West adopted the Greek concept of democracy and developed secular tradition. Religious Europeans who disagreed with new changes escaped to the newly found America with copies of the Bible.

During 1000 years of the Dark Ages in Europe, civilizations had been booming in the East. From China and Persia to Egypt and Iraq societies were rich and developed. Centres of knowledge and learning, art and culture and trade and business existed outside Europe.

Western philosophers and political thinkers developed a remarkable model that bridged Pre-Roman Era philosophies with realities of the post-Roman European societies. This was an amazing experience. Western achievements in the field of science and technology also have no match. Non-Western societies can learn and benefit from western experiences.

The problem, however, started when Western ruling elites believed that they had achieved the highest level of knowledge and development. They, then, embarked on civilizing the rest of the world. Western powers masked their greed and unleashed violence against non-western people that was unprecedented in human history.

That was beginning of Western double standards, which are in practice till date. Colonization continues in changed forms and manipulation, deception and utter lies are used to mask cultural imperialism where the West wants to export its brand of democracy at gunpoint. When freedom fighters serve Western agenda they are praised and when they turn against the West they are branded as terrorists.

Soviet troops came to Afghanistan in 1979 at the invitation of the then Afghan government but to Americans it was an occupation. However, the West does not apply the same to its misadventures in Afghanistan, Iraq and now in Libya where aggression and occupation are labelled as ‘just wars’.

Terms such as political Islam and hard-line Islam or moderate and extremist Muslims are part of the same divide and rule policy. And Muslims are expected to fit to a character and profile designed for them by someone else.

Mr. Walker’s proposal brings to mind an image of Africa where one white hand is distributing food among hundreds of poor and hungry blacks. It is not equality. It is patronization. It is teaching civilization to aliens. It is an arrogant and ignorant mindset that believes in the finality of its political, economic and social discourse. This mindset believes that objectivity and truthfulness are American or Western domains where subjects are just told what is right and what is wrong. What is true and what is false. Which are just ‘wars’ and which one is genocide?

The fact is that interests of the US war machine and the media are entwined. Most mainstream Western media and journalists cooperate with the Pentagon and the White House. Many Western journalists go to Afghanistan, Pakistan and Iraq and in the latest case to Libya but do not tell the full story. It is a very clever technique of white propaganda where half truth is deliberately told and words and terms are used as weapons to further agendas.

The BBC World Service has deep connections with the British secret services and the U.S defence department. In fact, the BBC plays a key role in  the British state propaganda.  Five multinational corporations own most of the Western media. General Electric is one of those and GE produces military hardware. In the presence of such media and military conglomerates  the U.S and Western public is ill-informed.

Since the early 1980s the United States has been harbouring and training terrorists and the American military and media are engaged in black and grey propaganda. I vividly remember a U.S Senator who came to Peshawar and called for ‘Jihad’ against the Soviets in the name of Islam.

The Pakistani military has played a dark and dirty role in Afghanistan. Some Pakistani politicians and dishonest journalists and intellectuals, too, have Afghan blood on their hands. Pakistan owes an apology to the people of Afghanistan for the wrong doings of a small number of Pakistanis but it is not the whole truth. People of Pakistan have sacrificed due to the illegal and wrong U.S intervention in Afghanistan in the 1980s. The U.S attack on Afghanistan in 2001 has caused further destruction.

Indeed, people of Pakistan have hosted the largest number of refugees for the longest period of time and shared everything with Afghans and the majority of Afghans acknowledge that. At a time when U.S and EU have turned xenophobic on the issue of  immigrtion and people of other colours, races and religions are targeted in the West, Pakistan still hosts millions of Afghans. Yes, many Afghans are unhappy about the role of Pakistani ruling elite, yes, they complain but hundreds and thousands of Afghans are engaged in businesses in Pakistan and are socially connected with Pakistan.

Yesterday’s mujahedeen are terrorists for Americans but Pakistanis had identified foreign stooges 30 years ago and we know them now. Isn’t it interesting that NATO and U.S are sponsoring  Al-Qaeda in Libya. Even today, extremist Chinese Uighurs are trained in Afghanistan under the U.S nose. The British and the US have been protecting Hizb ut-Tahrir which is the main extremist organization in Central Asia and Pakistan. There are links between extremist organization Jundullah and the West. Chechen terrorists are protected and supported by Western spooks and the media.

The point I am trying to make is that troubles in Pakistan, Afghanistan and in many other countries are the result of the foreign proxy wars. Many believe that extremist threat is actually a manufactured threat to fill the enemy gap after the fall of the Soviet Union. Terrorists are still one of the tools to achieve global hegemony and control over world resources.

Unless Western mindset is changed and Western powers are ready to pursue fair and just policies there will not be any meaningful bridge building and anti-Americanism won’t end either.