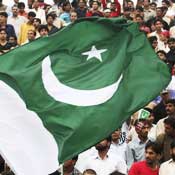 “Pakistan ka matlab kiya, la ila ha illallah”, this is one slogan that is always heard in any milli nagma, drama, movie or a documentary made for 14 August. Growing up all of us learnt that Pakistan was created in the name of Islam. In our schools, 2 Nation Theory is instilled in our minds. It is made very clear that Muslims were persecuted under Hindu majority India and these 2 nations were so different that it was impossible for them to live together. The famous line of Quaid-e-Azam is always quoted to support this argument where he explains the severity of differences by giving example of a cow, how it is worshipped by Hindus, whereas Muslims eat its meat and hence these 2 nations should live separately.

Here we are after 64 years, let’s see how much we have progressed? Being a Muslim majority country, there should be unbreakable unity, love and faith in one another since we are all the same. Isn’t it why we all got together, to be one big happy family? Reality however, is far from it. We have lost Bangladesh due to our racist attitudes towards Bengalis, are on the verge of losing Balochistan, haven’t played any influential part in helping Kashmiries get their basic rights of freedom and self-determination and are fighting what looks like a never ending battle with Islamic extremism.

Don’t get me wrong, I am one of those die hard Pakistanis who just cannot hear anything against their country and I am glad that we have Pakistan. Heck I still believe in the idea of 2 nation theory; majority Muslim states having a separate country so that their interests are better represented in a democratic government which was difficult in a united India. However due to our narrow mindset, we made 2 nation theory into everyone-that-disagrees-with-me-is-a-different-nation-theory.

For most of us, it is our Muslimness that comes first and Pakistaniat afterwards. Honestly I don’t think that this is such a bad idea since 97 percent of people in this country are Muslims, religion should be a pretty cohesive force between our citizens. The tragedy however is that we don’t have one Islam. As a result, a nation that was already diverse along the lines of ethnicity, language, culture and heritage is further divided. Therefore, when we cannot even stand our Muslim brothers and sisters who are a little bit different, then Christians and Hindus cannot even dream of being equal citizens or accepted by the Muslim majority as loyal Pakistanis. Consequently, now we are living in a nation where when minorities are persecuted, the attitude is “well the whole country is burning, what are they complaining about?”

In my mind, being a Pakistani always meant being a Muslim. I was never able to separate the two. But as the time is passing, I think we need a clear identification of who we are. On one hand, if being a Muslim is more important than being a Pakistani, then why is our country tearing apart into pieces? Aren’t Balochis, Sindhis, Pashtuns, Siraikis all Muslims? Why are our hearts not filled with love for our Muslim brothers and sisters? Isn’t that what the concept of Ummah is all about, to be united under one God, Prophet and Book and hence erasing all other differences? Why are we so eager to kill each other’s throats? Wait!!! Let me correct that. Why are we so eager to kill our Muslim brothers’ and sisters’ throats?

On the other hand, if we are all Pakistanis, Why do we persecute Non-Muslim minorities in our country especially Christians and Hindus? Why can we never expect that they can be loyal citizens of Pakistan? We can’t stop criticizing if any other country persecutes its Muslim minority citizens either by questioning their integrity, passing discriminating social or political policies, or taking away their religious freedoms; yet we do the very same thing with our minorities. For us, they will always be Amreeki, Bharti or Israeli agents who are conspiring against Pakistan.

So the question remains, Aakhir Main kaun hoon? While writing this article however, I have discovered the answer for myself. There are 1.5 billion Muslims around the world, spread across 6 continents Alhamdulillah, who practice the same faith as I do. But not all of them go crazy when Afridi shoots a sixer and proves why he is called “Boom Boom”, or feel proud when Rahat Fateh Ali Khan conquers the Bollywood music industry, or desperately wait for the next episode of Coke Studio, or will go to the cinema no matter how packed it is to watch Shoaib Mansoor’s movies, or break traffic signals and then shout at the other person as if they were the ones making the mistake, or park right at the no-parking sign, or eat gol-gappas from the thelas chahey jitni marzi makhian bethi hoon, or speak English without any knowledge of its grammar, or hate India from outside but secretly love Bollywood movies and can dance to Munni Badnaam at every wedding.

These are the traits that I share with my fellow citizens, no matter which province they belong to, which language they speak or what religion they practice. I am a proud Pakistani for whom every other Pakistani is equal because I can find a lot of other Muslims in the world, but I am lucky enough to live side by side with other Pakistanis.