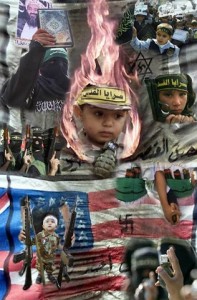 Any historian of Islam would shudder at what passes in Pakistan for instruction in Islamic history.

Some Years ago, I queried an M.A class in this subject at a major Pakistani university. None of the 25 odd students there had an inkling of the issues which defined the first major schism in Islamic history – the khawarij movement.

None gave a satisfactory explanation of the Ash’arite doctrine and its place in Muslim theological development. Only one had an inkling about the Mu’tazila – woh acchay log naheen thay. Unki fikr men dahriyat ke anaasir thay (They were not good people, There were elements of atheism in their thought.) l had then thought that we are witnessing ‘the end of history in Pakistan.’ (Francis Fukuyama had not yet come out with his arcane thesis about history’s end.) I was wrong of course ideologically loaded ignorance does, after all, produce a history.

The well springs of righteous ignorance have deepened in Pakistan as they did in Algeria where, following decolonization in 1962, false attempts at “indigenization” yielded parallel systems of education, one French and the other Arabic, one modern and the other traditional. It is largely the products of the two systems that have been at war since 1992. This war has by now cost some 70,000 lives; and continues to inflict enormous suffering on Algeria and its people.

In Pakistan, the last two have been decades of dramatic expansion of the madaaris which continue to receive generous government subsidies and undetermined amounts of funding from abroad.

According to the Ministry of Education, in 1995 there were 3,706 such madaaris in Pakistan with an enrolment of 540,048. The figure of enrolment in the higher levels of study 80,051 male, 4,738 female is notable for its social and political implications. After 12-18 years of study, these youth are unprepared for any profession except to serve as imams in mosques or yearn for an Islamic state in which they shall presumably constitute the governing elite.

I should note that the figures l cited above are inaccurate approximations, as officials in the Ministries of Interior and Education freely admit.

The government has no record of the number of madaaris, nor of their enrolments, nor even of the foreign students who ate attending these institutions. The state does not audit their finances, does not monitor the flow of foreign funds into them, does; not oversee their syllabus, examination system, or disciplining methods.

On a few occasions a concerned bureaucrat or an anxious intelligence officer has proposed a system of registration and reporting consular visas for foreign students, and audit.

Each time pressure groups weighed in and politicians – military as well as civilian – in power buckled under. As interior minister, General Naseerullah Khan Babar is reported to be the highest official to have favoured taking V these steps. He too could not get past the obstacle of crass political opportunism,

Commentators in the press often characterize these madaaris as ‘medieval institutions’ which is an outright insult to early medieval Muslim civilization. Spot checks at several such institutions reveal that their curriculae and instruction bear little resemblance to such medieval centres of learning as al- Azhar in the 12th,

Zaituna in the 13th, or the Qarawiyyin in the 14th, centuries. None of the subjects that were part of the core programme, of studies in the Islamic centres of learning – e.g. mathematics, chemistry, botany, astronomy, and philosophy are taught in the contemporary madrassa. They have not and are not likely to produce an al-Farabi, Ibn a Sina, Sheikh Saadi or Amir Khusro of contemporary Muslim world

Their curriculum reduces Islam a penal code, a ritual of ablutions and prayers and a litany of crimes and those harsh here-&-now punishments. Thousand of energetic and motivated youth who graduate from these institutions are men abandoned in the middle of the ford, cut off from their real past, totally unprepared to meet the challenges of the future and fevered by the dreams of a theocratic state in which they shall be assigned their merited roles.

They can produce a history of sorts of sectarian gangs setting out to purify the country, and create the Islamic order which they imagine they ate equipped to run. The Taliban, graduates themselves of Pakistani madaaris, have emerged as the role model of most students and alumni of our these religious and some nominally secular institutions.

More ominously estimates of Pakistanis who have fought with the Taliban vary from 10,000 to 15,000. (See Ahmad Rashid, “Afghan Conflict Eroding Stability in Pakistan”, The Nation, January 21, 1998.) Overall, the number of armed Islamist militants in Pakistan is estimated at 40,000 to 50,000, many of them veterans of wars in Afghanistan and Kashmir. The pool of militancy is in fact unfathomable.

Many wanted Pakistani terrorists find sancruary in Afghanistan, a fact that only occasionally becomes public. Qari Allah Wasaya who was believed to have led the jail break in Dera Ghazi Khan, is reported to have told police investigators that he had been summoned from a Harakat-ul-Ansar camp in Afghanistan to free his fellow terrorists.

The massacre in the Mominpura cemetery on January 11, 1998 was an anniversary commemoration of the bomb blast which killed a founding father of the Sipahe Sahaba. It is understood also to be linked to Mr. Allah Wasaya’s death in police custody.

In turn, the protestors against the massacre attacked and burned the office of Lahore’s deputy commissioner and the post master.

This chain of events like some others, symbolized the contradictory ways in which the state is implicated in the cycles of sectarian violence.

Pakistani and Indian officials routinely blame RAW and ISI respectively particularly heinous terrorist attack or atrocity occurs in either country. A decade ago these accusations did not fly with such frequency. That they do, reflects a certain reality which is that the scope of proxy warfare between India and Pakistan has broadened; its pace has quickened. At various times, Pakistan has suspected India of aiding Afghanistan-linked sabotage attacks of the 1980s, the ethnic strife in Karachi, and in all of Pakistan the religious sectarian violence.

India has accused Pakistan of aiding Sikh militancy in Punjab, Muslim militancy in Kashmir and terrorist bombings in Bombay and Delhi and most recently the bomb blast in Coimbatore. Independent observers believe that there is a significant measure of truth, on both sides in these allegations.

The fact that accused Pakistan hare developed nuclear weapon of capability may have much to do with their increased engagement in proxy wariare. We know this phenomenon from the cold war years.

The United Slates and the Soviet Union used the condition of nuclear deterrence to wage wars of intervention and undermine each other by aiding and abetting dissidents, rebels, and revolutionaries in each other’s spheres of power.

An estimated 17 million people perished in these deterrence- stimulated wars of what some international relations scholars now call ‘The Long Peace”. Iran, Korea. Vietnam, Cuba, and Middle East produced confrontations between the two giants; the threat of nuclear war defused them, confirming the premises of nuclear deterrence.

India and Pakistan appear to have iallen for this logic of deterrence. As countries transition, subject to the instabilities and tensions of rapid social change, without the benefit of vast geographical separation, and lacking the elaborate system of nuclear command and control which was essential to insure a relatively safe interplay of a mutual deterrence, these two countries arte dangerously exposed to miscalculation and misadventure.

Yet, so far neither country’s ruling elite seems to recognize the risks to which the are exposing themselves. In conclusion, I should reiterate that violence in our society, as in most environments of accentuated violence, has multiple roots.

These include (a) a culture violence which persists while the traditional values and social processes which had limited its uses in an earlier time have been eroded rapid and uneven social and economic changes; (b) injections of religion in politics and the theocratic promises of successive governments which have had the effect of provoking sectarian divisions and demands, (c) U.S. sponsorship of an internationalized.

Jihad which provided the framework for proliferation of arms and legitimating of organized violence on religious grounds, (d) international and regional interests which have encouraged violent groupings to engage in proxy warfare; (e) an educational policy which breeds frustrated and ignorant armies of youth bred on literature of hate and violence (f) a nuclear stalemate which has encouraged India and Pakistan to assume that they can support armed dissidents in each other’s country without incurring the risk of a wider, (g), decline in the will and capacity of state institutions to investigate crime and enforce laws rationally and vigorously.

The challenge, in other wards, is too large and complex to be met by limited and half-hearted measures of crisis management, carried out with a maximum of political pussy footing.