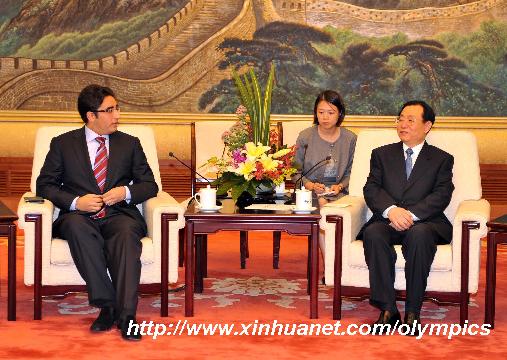 NANNING (China) Sept 5 (APP):Chairman Pakistan Peoples Party Bilawal Bhutto Zardari called upon political parties in Asian countries to enforce the highest standards of transparency and accountability in government and institutions to ensure that people remain invested in the political process.Addressing International Conference of Asian Political Parties (ICAPP) 2011, Bilawal said Asia was expected to contribute more than half of the world’s economic output, restoring the world’s largest continent to the position of economic dominance it had held 300 years ago.“We may be witnessing the birth of a new world order,” he said and pointed that everyone was calling the 21st century the “Asian Century”.

The transformation of Asia’s role in the global scheme of things has been nothing short of miraculous, he added.

Wang Jiarui, Chairman of the Conference Organizing Committee and Minister of the International Department of the CPCCC read a message on behalf of Xi JinPing, Member of the Standing Committee of the Political Bureau of the CPCCC and Vice President of China.A video message of Secretary General of the United Nations Ban Ki Moon was also shown.

The conference is being attended by about 150 delegates representing 53 political parties from 26 countries of Asia including Turkey, Japan, Iran,Uzbekistan, South Korea, India, Bangladesh, Laos, Nepal, Srilanka, Singapore,Cambodia, Malaysia and Indonesia.

The PPP Chairman said ICAPP as a gathering of Asia’s top political leadership is an exceedingly important forum in the 21st century, which in itself is a tribute to the foresight and vision of the organization’s founding leaders.

He said the “Asian Declaration” issued at the end of the First ICAPP in Manila 11 years ago is to read a manifesto for today.

“That document touches on all the major issues of our times and its call for Asian countries to strengthen economic cooperation, guard against future financial crises and establish an Asian Monetary Fund resonates more deeply today than they did even in 2000, he added.

“These words should give us pause as Asia teeters on the brink of a second global recession that is not of its making – barely three years after it weathered the first,” Bilawal said adding, “they should inspire us to build a new, independent financial order for Asia that would enable us to chart our own course in the future.”

He urged for reflection on the First ICAPP’s appeal to Asian governments to do more to address poverty and economic inequalities.

While Asia can be proud of the rapid pace of its economic development, it must ensure that the fruits of this growth are shared out equally among its people, he stressed.

He said economic development should be for the people, not at the expense of the people.

The PPP Chairperson said there is something prophetic about the Declaration’s appeal to Asian countries to seek the peaceful resolution of regional disputes and act in unison against “transnational crimes”.

He said force alone will not defeat terrorism and extremism – unless it is force tempered with political engagement and economic development.

Key to such economic development is poverty alleviation, he said adding, “We in Pakistan have initiated the Benazir Income Support Program, which serves the dual purpose of poverty alleviation and women’s emancipation. Over 80 billion rupees have been distributed to four million women living in poverty.”

Referring to the heavy rains and flooding in Sindh and Baluchistan in which millions have been displaced, placing an enormous burden on the people, he said, “We are a resilient nation and we will fully recover.”

He talked about the worrying climate of fear developing amongst people in the west.
“It is worrying that some unable to reach the necessary compromise to address their own internal structural economic flaws instead choose to demonize emerging Asian economic superpowers,” Bilawal added.

He said instead of appreciating the financial support provided by China, some within their society spread malicious propaganda designed to provoke fear of the other and distract from their own failings.

This dangerous short sightedness could lead to paranoid overreactions with catastrophic consequences, he said adding, “I dread the return to the divided world, a world of competing spheres of influence, a world of cold wards, a world of hot wars, a world of cyber wars and a world of economic wars.”

He quoted Johann Wolfgang von Goethe as saying, “Divide and rule, the politician cries; unite and lead is watchword of the wise.”

“We want a united world of equals not a divided world of rivals.”Bilawal said he stand before the world as a son who has lost his mother to the evils of terrorism.

“I stand before you as a son willing to risk my life to rid my country, my region and the entire world of the mindset that assassinated Shaheed Mohtarma Benazir Bhutto. This mindset poses the greatest threat to the way of life as we know it.”

The PPP Chairman sid Pakistan lies wounded as a victim of terror.“We don’t lack the will, we lack the means. We are neither complicit nor are we incompetent, we lack the capacity to face the worlds enemies on our own.”

At a time of global recession and natural disasters, when Pakistan requires sympathy, support and assistance from the west, it is met with suspicious, accusations and demonization, he observed.

“This situation is a product of fear,” he said adding, “We know that drones, raids and unilateral actions are not the answers. Dialogue, deterrence,development and democracy is the only roadmap to peace.”

He exhorted the Asian political parties to join hands and reassure their friends in the west that collective efforts must be made to eliminate these unfounded fears.

“Ultimately, it would require the collective will and joint action of all the peace-loving countries of the world to banish these dark forces permanently from our midst.”

He expressed the belief that the International Conference of Asian Political Parties is an ideal platform for the expression of such collective will.

He said it is a privilege to be present among Asia’s leading political leaders and he is sitting amongst men and women who will shape the 21st century.

He said it is a special moment for him as eleven years ago his late mother, Shaheed Mohtrama Benazir Bhutto, represented Pakistan People’s Party at the First International Conference of Asian Political Parties in Manila.

While thanking the Chinese government for their generous hospitality and for taking the initiative in organizing the conference, he said China’s support for multilateral mechanisms like the ICAPP reflects its commitment to the cause of peace and stability in Asia and beyond.

“It is a reflection of China’s resolve to work with other countries in the pursuit of the larger objectives that affect all of humanity.”

He expressed happiness that the Conference has afforded him an opportunity to visit China during the “Pakistan-China Friendship Year”.

“Our two countries are bound together by fraternal and brotherly ties that have stood the test of time.”

Bilawal said he was glad to have had the chance to make new friends in China and to experience some more of the richness of its astonishing cultural diversity as ever he is eternally grateful for China’s consistent support for Pakistan.

He reminded that the International Conference of Asian Political Parties was founded 11 years ago with the noblest motives and highest aspirations.

“It is up to us to see that the dream stays alive.”He concluded his speech by saying that the conference should be used as an opportunity to come together and enunciate vision for the future and usher in the Asian Century.