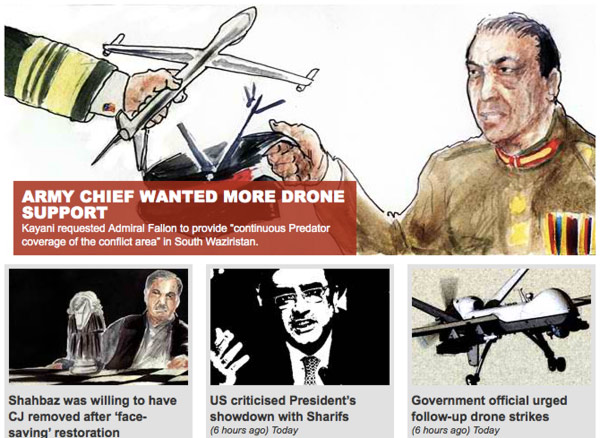 September 3, 2011. Wikileaks has revealed that the in-charge of Pakistan’s ideological borders, faith and two nation theory the honorable chief Ashfaq Pervez Kayani told privately & confidentially to the ex-US ambassador Anne Patterson that he was very unhappy over a clause in the Kerry-Lugar bill stipulating civilian control over the military establishment. He also expressed unhappiness over a clause in Kerry-Lugar-Berman Bill which was about Pakistan Army’s hegemony over parliament.

According to details of the cable sent by the US embassy on October 7, 2009 and released by WikiLeaks on August 30, Patterson met COAS General Ashfaq Kayani and ISI DG Shuja Pasha in a two-hour meeting and heard a number of complaints about the Kerry-Lugar bill, particularly a fear that the waiver in Kerry-Lugar would not be used and aid would be suspended.

“There were several clauses in the bill, such as an American assessment of civilian control over military promotions and the chain of command that rankled COAS Kayani. DG ISI Pasha said Kayani was receiving criticism on the bill from the corps commanders,” the cable said, adding that the ambassador “emphasised the bill’s long-term commitment to Pakistan and made three points – provisions of the bill could be waived, the bill only required certifications and ‘assessments’, and the bill does not apply to the large amounts in the Pakistan counterinsurgency fund or the Coalition Support Fund but only, so far, to non-appropriated foreign military financing”.

Moreover, the same leaked cable also revealed that Gen Kayani had confessed to the huge pressure he was under regarding what to say about the Kerry-Lugar-Berman Bill as the corps commanders meeting was around the corner and he had to give them some satisfactory answers. He even had wanted to release a statement about the same, but couldn’t come with anything, the leak added.

According to early leaks, General Kayani was behind conflict (and propaganda) on Kerry-Lugar bill. He and his subordinate DG ISI Ahmed Shuja Pasha both have been using media to boost their image and malign civilian Pakistan Peoples Party led Federal govt since formation of democratic government in 2008.

Instead of highlighting the hypocrisy of a Chief and his undemocratic mindset & unprofessional attitude, which he showed via ISPR Press Release on Kerry Lugar Bill as well as discussing foreign affairs with US-ambassador, our ISI sponsored media presenting him as a most generous, honest, loyal and democracy lover General through twisted headlines and news content:

The Nation ISI’s most trustworthy propaganda tool masterly twists a headline to make it pro master; General Kayani did not want to topple government

The other media group Geo have little bit different twist of Wikileaks -headling General Ashfaq Parvez Kayani could have overthrown the government if he had wanted to, but he had no such plans.

Click here to post a comment
Pursuing Pakistan’s interests in Afghanistan? A rebuttal to Sherry Rehman’s Jinnah Institute’s report
From Hazarajat to Quetta: A sorry tale of Quiet Genocide of Hazaras – by Maisam Ali