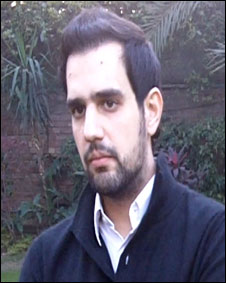 We are extremely perturbed to hear the news of the kidnapping of Shahbaz Taseer and our thoughts, prayers and wishes are with his family in this trying hour. In trying to make sense of this disturbing and depressing event, we have come across the following:

– The abduction could be linked to the Islamofascist lobbies who want to use this as leverage to free Mumtaz Qadri, the killer.
– The release of Lashkar-e-Jhangvi founder and GHQ-ISI proxy, Malik Ishaq by the Pro-rape Islamofascist judiciary has not only lead to a spurt in recruiting activities by Jihadi-sectarian groups but also an increase in their criminal activities.
– Prof. Akbar S. Ahmed, writing for the Guardian, also posits that this abduction could be a message to his sister, Shehrbano Taseer’s journalism/activism to expose the Islamofascists.

We also came across this on the pkpolitics forum; a website that promotes a rightwing-Islamist agenda (this website is co-managed by Samad Khurram and Ghulam Mustafa.):

On one of the forum (pkpolitics.com), a person posted this message, I am not sure whether this person is in Pakistan or UK, but authorities in Pakistan should track such people down.

(Translation: see here, (late) Salman Taseer’s son has been kidnapped; it seems that his days of meeting his father have come closer. Salman Taseer was taught such a lesson by a Qadri Sufi that the Occidentalists are now even running away from Sufi islam.)

All these motives are very plausible and interrelated.

One thing that is certain though is the role of two institutions whose job it is to provide Justice and Security but who have done anything but that! One institution and its Jihadi proxies (TTP-SSP-Haqqani Network-Jundullah) is known all over the country for its expertise in kidnapping. Ask the Baloch Nationalists, the women and children of Parachinar and journalists like Omar Cheema or the late Saleem Shahzad.

The other institute is the “Independent” Judiciary run (often independent of the Constitution of Pakistan) by Iftikhar Mohammad Chaudhry who was able to win his job back after an NRO with the ISI. This judiciary has clearly reneged on its promise to pursue the missing (kidnapped) persons case, which as per some estimates involves nearly 8000 missing Baloch Nationalist youth. Furthermore, it has made it a mission to release all the sectarian terrorists and criminals arrested by the Government on some flimsy excuse. The chief such excuse is “lack of evidence” (often promoted by urban liberal apologists of ISI and SCP) as our esteemed judiciary does not consider press conference and public admissions of the crimes in question, circumstantial evidence, detailed investigations, motive, opportunity, past record and eye witness testimony obtained from Pakistan and other countries as “sufficient evidence”!

These “efforts” by the “independent” judiciary are then whole-heartedly supported by the rabidly Pro-Taliban, anti-democracy and Pro-Army “independent” media who, on que, jump in to deflect the crimes of the Judiciary on to their favorite target, the PPP-elect government.

It is the sins of omission, commission and blatant disregard for the norms of humanity by these enabling institutions, also known as the Three Jeem Alliance, which has created an environment of lawlessness where criminals and terrorists are not only protected but encouraged.

A friend recently noted that Shahbaz Taseer’s kidnapping is the second high-profile abduction in Lahore this month. Only a few days ago, on 13 August, a US citizen (Warren Weinstein) was abducted. The murders of Salmaan Taseer and Shahbaz Bhatti and now Shahbaz Taseer’s kidnapping underscores the failing writ of the Punjab Government. Kidnappers of Shehbaz Taseer dropped a gun which could be used for investigation and media airs it to advantage of criminals.

The unholy Teen Jeem are so evidently in action once again.

Click here to post a comment
Dismantle the oppressive establishment – by Dr Amna Buttar
Book review: Taliban and Anti-Taliban, Another book to kill for? – by Khaled Ahmed