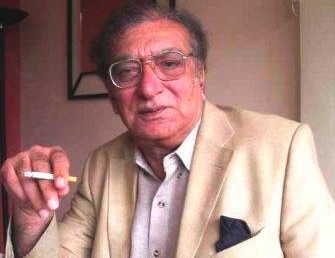 (They say that Faraz has left for some other land,
Taking with him all the sorrows of the city, paying away all its debt.)

The long history of political turbulence in Pakistan produced a long list of writers, poets and artists who raised their voice against oppressive regimes. In exchange, they suffered regular threats, imprisonment, torture and exile. Prominent writers and artists like Faiz Ahmad Faiz, Habib Jalib, Ahmed Faraz and Ustad Daman were hunted and haunted by the establishment. Finding the political milieu unbearable, these writers had to go on self-exile as mark of protest. Through their poetry and other writings, Faiz, Jalib, Faraz and others exposed the exploitative and suppressive nature of the Pakistani state, plight of the ordinary citizen, helplessness of writers and artists, imperialist interference and their agencies, and the environment of political suffocation borne out of pruned civil rights, truncated laws and gagging of public opinion.

However, as one may be proud of this legacy of protest and defiance, it is sad to note that there have been writers and poets who accepted positions and power as rewards for keeping silence or lending support to the rulers. But then, this is not a phenomenon unique to Pakistan. Hegemony will always find courtesans and court-poets for legitimacy.

Most of the Urdu poets and writers from Pakistan have always been politically responsive, unlike their counterparts in India who chose to remain apolitical/neutral, especially after independence. This was perhaps because of linguistic-communal introversion that Urdu-speakers suffered in India. On the other hand, the Pakistani writers and artists had to express themselves in a long-term civil war-type situation characterised by a continuous political instability, lack of social reform, a continuing grip of landed oligarchies and tremendous neo-colonial pressure on the Pakistani political economy. Therefore, we see a galaxy of radical writers/poets associated with the Progressive Movement, which included poets like Faiz, Jalib and Faraz. With them the Progressive Movement flourished in Pakistan, while in India we saw a decline with leading poets like Ali Sardar Jafri reciting poem in praise of Lotus (while accepting Gnanpith award) and applauding Atal Bihari Vajpayee as a great poet.

To trace the legacy of anti-hegemonic resistance we see that Faiz was jailed for a year after being implicated in the notorious Rawalpindi conspiracy case. Habib Jalib was imprisoned several times. To silence him, other tactics were also tried, e.g., his name was selected for Adamji Award, the highest literary award of Pakistan. Habib Jalib refused to accept it, saying that he wrote for people, not for Adamji. Ahmed Faraz, best known Progressive poet after Faiz and Jalib, was first jailed in June 1977 during the Zulfiqaar Bhutto government for reciting his poem Peshawar Qatilon (Professional Killers!) in Islamabad in which he challenged the military rulers, saying: Peshawar qatilon tum sipahi nahin (Soldiers you are not, you professional assassins).

As he always found himself at the left of the establishment (right from the Ayub regime, to Yahya’s, Bhutto’s and down to Musharraf’s), Faraz was always viewed by the establishment as a rebel. In 1978 he was exiled from Sindh (by the Zia regime), receiving orders for his exile in a Mushaira where he had just recited his famous poem Muhaasira (The Siege). He felt so greatly dejected and heartbroken that he left the country and did not return for six years. Asked once, when Zia was still in power, why he had left Pakistan, he replied that he was in Karachi when the order expelling him from the province of Sindh was served. ‘I said to myself, ‘What have we come to when a man is exiled from his own land! Today, it is Karachi, tomorrow it will be Peshawar, the day after, Lahore. That is when I decided to leave.’ Faraz also returned the Hilal-i-Imtiaz conferred on him for his literary achievements in 2004. He returned the award in 2006 after becoming disenchanted with the government and its policies. He said in a statement, “My conscience will not forgive me if I remained a silent spectator of the sad happenings around us. The least I can do is to let the dictatorship know where it stands in the eyes of the concerned citizens whose fundamental rights have been usurped. I am doing this by returning the Hilal-e-Imtiaz (civil) forthwith and refuse to associate myself in any way with the regime…”

No one could match the wit of Faraz. When asked why he had kept the Hilal-e Imtiaz for two years, he replied jokingly, “Do you think it laid eggs in those two years?”

He could actually outwit his opponents without losing his sense of humour. An anecdote gained much popularity. One day Faraz heard loud banging at his door. He rose hurriedly to open it, only to see four or five bearded men in white skullcaps. “Can you recite the Kalima?” one of them asked. “Why, has it changed?” Faraz inquired.

These are just a few examples of how he could give a humorous turn to a grave situation or outwit his opponents. Kishwar Naheed, writing a letter to ailing Faraz (in The Hindu, New Delhi on 24 August 2008, just a day earlier when Faraz died), narrates several such incidents. Once at a mushaira held on the occasion of International Women’s Day to honour protesting women. Faraz was the chief guest. When he started reciting his poetry, a fiery Tahira Abdullah objected, saying, ‘we want poetry on women.’ Faraz abruptly replied, “But all my poetry is about women.”

With the passing away of Faraz (August 25, 2008) in Islamabad, a true inheritor of Faiz’s mantle has died. As noted Pakistani journalist Khalid Hasan puts: ‘Like Faiz, he suffered prison and lived in exile during the dark days of military rule in the 1980s. Like Faiz, he is very popular, especially among the youth, and nobody wrote with more intensity about love than Faraz. He gained fame as a young man…. Few poets have had more of their work set to music and performed by the great singers of the age than Faraz.’

Faraz is considered one of the best poets of Pakistan. He was born in Nowshera on January 14, 1931. His real name was Syed Ahmad Shah. The Pashto-speaking Faraz learned and studied Persian and Urdu at the Peshawar University, where he also taught later. He headed the Islamabad-based National Book Foundation for several years. In 1976, he became the founding Director General (Later Chairman) of Pakistan Academy of Letters. He wrote 13 books and all put together came as Shehr-e Sukhan aarasta hai (A City of Poetry is Adorned), his latest publication so far.

Arjumand Ara is a lecturer in the Department of Urdu, Delhi University.