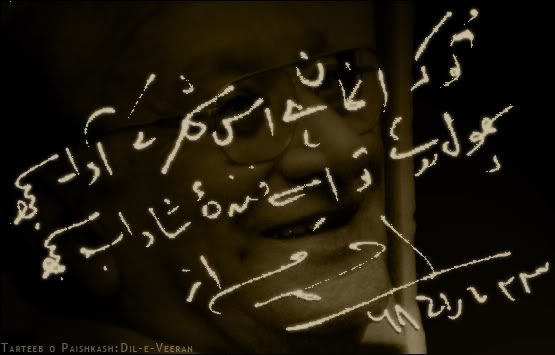 Today, 25th August, marks the third death anniversary of the visionary, the defiant and one of the most acknowledged craftsmen of Urdu language, Ahmad Faraz.

Faraz was probably among one of the last few protagonists of literary movement, Progressive Writers’ Movement, which led to change drastically the landscape of Urdu literature, in last half of twentieth century, that once was marked with rhetorical notions of selfish love and mainly centered around the individualism. The foundation of movement was laid by Syed Sajjad Zaheer and Rashid Jehan, further nurtured by Faiz Ahmad Faiz, Sibt-e-Hassan, Manto, Munshi Premchand, Ali Sardar Jaffery, Ahmad Nadeem Qasmi and then inherited by Ahmad Faraz, Fehmida Riaz and Kishwar Naheed.

Syed Ahmad Shah, popularly known as Faraz as was his pseudonym, was among the gifted ones who see the outer world with their own intuitive eye and have ability to translate it into words, who feel the miseries of downtrodden and can forge these feelings in literary masterpieces. The memories that shaped the poet Ahmad Faraz were consisted of times when Faiz Ahmad Faiz, the inspiration and mentor of Faraz, was put behind the bars for allegedly being one of the conspirators of famous Rawalpindi conspiracy case. Faiz wrote the following one and Faraz was the first one to take the message in its true spirit.

Nisaar main terii galiyuN pe ae watan, ke jahaaN
Chali hai Rasm, ke koee na sir uthaa ke chalay
(I offer myself in sacrifice to you, my dear nation
Where it has been decreed that none should walk with heads held high)

Faraz knew, from the beginning, that the path he had chosen was full of obstructions and impediments, but proportionally he was well aware of the syndrome plaguing his people. Fall of Dhaka left sore scars on his conscious and then inhumane atrocities committed by Pak-Army against Baloch people led him to pen down one of his most famous and controversial poems, ‘ Peshaawar Qatilo!’, as the protest of a poet against the crimes of his Army.

http://www.youtube.com/watch?v=iHXJDUfG8GI
Containing such strong criticism against the army, poem became the symbol of resentment of oppressed ones against the policies of state. In 1977 Faraz was whisked away from his home without being charged with any crime apparently for reciting this poem in Islamabad. So heart-wretched by the situation of his country at that time, he translated his agony into a poetic masterpiece, ‘Aisa Nahi Honey Denaa’

In 1976  Faraz became the founding director general of the Pakistan Academy of Letters.  In the 1980s he went into a six-year self-imposed exile in Canada and Europe during the era of Gen. Mohammad Zia ul-Haq, whose military rule of Pakistan he had condemned at a mushaira and whose power seemed to drive him to heights of inspiration. “That was the worst phase for our country’s writers,” he once said of the general’s rule. “Yet it also provided ample food for thought for the poet and made protest poetry so popular in Pakistan.” Faraz, who was also closely associated with Zulfikar Ali Bhutto and his Pakistan People’s Party, wrote some of his best poetry in exile, including “Dekhtay Hain” (“Let Us Gaze”) and “Mohasara” (“The Siege”). “Mohasara” is probably by far the most notable and illustrious work of Faraz’s poetic genius.

With the return of Shaheed Mohtarma Benazir Bhutto, Faraz came back  to Pakistan  where he was initially appointed Chairman Academy of Letters and later chairperson of the Islamabad-based National Book Foundation for several years. He was awarded the Hilal-e-Imtiaz in 2004 in recognition of his literary achievements.  He returned the award in 2006 after becoming disenchanted with the government of Military dictator General Pervez Musharaf and its policies.

“My conscious will not forgive me if I remained a silent spectator of the sad happenings around us. The least I can do is to let the dictatorship know where it stands in the eyes of the concerned citizens whose fundamental rights have been usurped. I am doing this by returning the Hilal-e-Imtiaz (civil) forthwith and refuse to associate myself in any way with the regime…” a statement issued by the poet.

As the times have changed and we, as a nation, have come too far to mourn the past national tragedies. The dance of death is still going on unabated in the streets, hills and towns of ours. Some still cling to hope and some have given up. But the dreams, the dreams of a peaceful and prosper future, that seem to be only concrete reality amidst this environment of terror and uncertainty. The dreams, that Faraz says, never die.