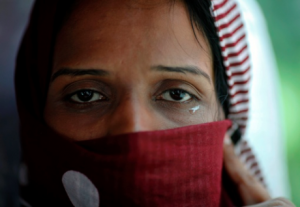 I don’t know if it’s true or not, but my Mom says that my first word was Allah. Well this is what supposed to happen when your house is so close to the mosque and the Azaan comes out of it 5 times a day.
I still remember my grandparents celebrating my aameen when I finished Quran at the age of 5. How everyone was so proud. When I started school, I was one of those kids who didn’t miss home. May be it was because I was so smart, and I always knew the answers to my teachers’ questions. My teacher was very impressed by my General Knowledge of religion but it was not because I read a lot of books at that age. I was just like any other kid. The whole credit goes to my grandfather and my dad who used to tell me all the stories of Prophets before bedtime.
From Adam, to Noah, to Abraham, to Moses, to Jesus and finally to our very own and very best Huzoor Muhammad (PBUH). Never did I feel as if I was any different than my fellow classmates, in fact at times I used to secretly think that I am better as I used to help them for preparation of tests or exams. Then in Grade 4, I remember someone in my Islamic studies class asked about Ahmadis from our teacher. When I listened to her answer, I was very surprised as until that time, I had no idea that my sect was hated so much by main stream Muslims. It wasn’t just a normal sectarian division based on religious differences such as Sunni, Shia or Deobandi or Brelvi; it was considered a sin to be an Ahmadi. Ahmadis are those who distort Islam, have no right to call themselves Muslims and “we” Muslims should not talk or eat with them as it is disrespectful to Islam and the honour of Prophet Muhammad (PBUH).

When I went home and asked my Mom about it, her reply surprised me even more. She was very clear that I don’t need to tell anyone about it. After that day, I was scared as to whether I should or should not tell my friends. It was weird because every day in the morning we would recite the same prayers, same national anthem proving our allegiance to our beloved country Pakistan; I learned the same kalima, same suras from the same Islamic studies books as them and the same Namaz for my oral Islamiat test. We used to send each other dishes for iftaar during Ramadan, exchange bangles or mehndi during Eid-ul-fitar and get all excited about whose bakra is the best during Eid-ul-Azha.

Now how can I hide it, it’s who I am, it’s my identity. Anyways, while I was fighting with myself over my identity, if ever the discussion regarding religion started, my friends would be leaving comments like Ahmadis are kaafirs, how they are bound to go to hell, all of this while I am sitting right there with them.

All this hatred made me realize what my Mom meant when she said that I don’t need to tell anyone. Then we moved to Islamabad and when I was in grade 9, we studied the constitution of Pakistan and how in 1973 Ahmadis were declared Non-Muslims. After learning that, I was shocked that Ahmmadiyya sect has been around for almost 100 years but “Muslims” realized this in 1973 that Ahmadis are Non-Muslims. Not only that, this realization came up in Pakistan, not from the Imam-e-Kaaba in Saudi Arabia or Al-Azhar University in Egypt (I gave these examples because these 2 institutions are respected regarding their opinions in matters of Islamic jurisprudence).

What about all the religious scholars who despite having religious differences regarding interpretations, have been involved with inter-faith dialogue with Ahmadis even before Pakistan was formed and still didn’t declare them Non-Muslims. Ahmadis worked with other Muslims during the struggle for an independent nation. How many people know that the person who drafted the Lahore constitution was an Ahmadi i-e Sir Zafarullah Khan. That document is the basis for the creation of Pakistan.  The reason that Muslims wanted a separate country for themselves was to have the freedom that they didn’t enjoy in Hindu Majority India. Who would have thought that the country that was created by a minority in the Indian sub-continent will persecute minorities after its creation?

Another thing which I don’t get is that why Pakistan is the only country which has made a constitutional law about Ahmadis regarding them as Non-Muslims? Every religion has sects and people disagree but nobody goes around making constitutional laws about it. Even other Muslim countries don’t define Ahmadis as non-Muslims in their constitutions.

If government is given the freedom to dictate who is a Muslim and who is not than this is a very dangerous precedent that is being set because in today’s world, no two sects agree on anything. For Sunnis, Shias are kaafirs, for Deobandis, its Brelvis and Aga Khanis are Non-Muslims in every one’s mind. Religion should be everyone’s private matter as Allah is the only one who knows what is inside anyone’s heart. A person can admit to something due to fear but not believe in it. What kind of  faith is that which is professed due to fear?

Freedom of religion is the basic principal of Islam which is evident from the teachings of our Prophet Muhammad (PBUH) and the verses of Quran. Nobody has the right to pass judgments on the “Muslimness” of any person. Not only that, in case of Ahmadis the argument has reached the point where killing them is going to get the person a place in heaven. Where do these scholars get the idea of declaring anyone wajib-ul-katal? How does taking the life of an innocent person open the gate to heaven? Simple common sense can provide reasonable and logical answers to a lot of questions but people would rather trust the interpretations of Mullahs who themselves need a crash course in basic Islam. It is so disheartening to see that in today’s world when the whole world criticizes Islam for being intolerant, Muslims are on the forefront to prove it.