Reporters Without Borders firmly condemns three recent attacks on journalists – two of them by policemen – in Peshawar, the capital of the northern province of Khyber Pakhtunkhwa. A reporter was badly injured when a TV crew was ambushed on 22 August. A TV crew was tortured by police after a suicide bombing in a nearby Tribal Area on 19 August. And the headquarters of an Urdu-language daily was raided by police on 6 August.

The attacks are taking place at a time of increasing physical danger for the media in which journalists are often the targets of reprisals. Not a month goes by without a journalist being murdered and the frequency of cases of police violence against the media has grown markedly since the start of the year.

“There is an urgent need for a reaction from the Pakistani authorities,” Reporters Without Borders said. “If security measures are not adopted quickly, coverage of the province of Khyber Pakhtunkhwa and the neighbouring Federally Administered Tribal Areas will become impossible for local journalists, who are caught in the crossfire of violence from various sides.

“The police should be investigating these cases of violence against the media but, instead, their actions are adding to the dangers for journalists. We urge those in charge of the Peshawar police to adopt firm measures to put an immediate stop to the police abuses, which in some cases have been extremely grave, and to punish those responsible.”

A crew from Khyber News TV, which broadcasts in the Pashto language, was ambushed in a high-security area near government buildings and the high court of justice in the centre of Peshawar at around 2:30 p.m. on 22 August. The crew consisted of reporter Hazrat Khan Mohmand, desk editor Syed Waqas Shah and technical manager Gul Sher. Nisar Khan of Akhbar-e-Khyber (and online newspaper affiliated to Khyber News TV) was also in their vehicle.

As police looked on, the TV crew’s route was blocked by men using two motor-cycles and a car who fired shots and hit Mohmand with stones, inflicting a serious head injury. Shah said he requested help from the police but they made no attempt to provide assistance. Mohmand was rushed to Lady Reading Hospital in a serious condition.

The attack was thought to have been prompted by Khyber News TV’s coverage of an alleged case of corruption involving Khyber Pakhtunkhwa information minister Mian Iftikhar Hussain, who denied having anything to do with the attack and accused the TV station of defamation and broadcasting baseless reports.

No suspects have so far been arrested. During a demonstration organized yesterday by the Khyber Union of Journalists outside the Peshawar Press Club, union president Arshad Aziz Malik called for the creation of a special judicial commission to investigate Mohmand’s attempted murder and bring those responsible to justice. Reporters Without Borders supports this call. 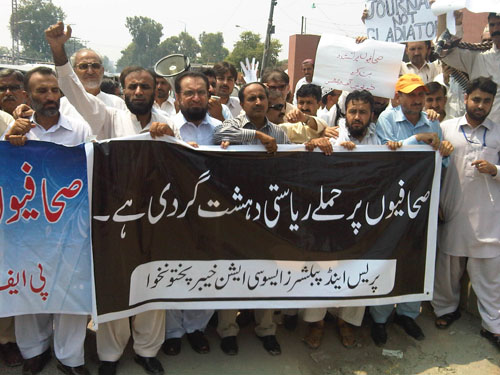 Samaa TV bureau chief Shaukat Khattak, cameraman Imran Khan and Anwar Khan, the operator of their DSNG (digital satellite news-gathering) truck, were detained and tortured by police in the Peshawar suburb of Hayatabad on 19 August after going to a Hayatabad hospital where victims of a suicide bombing in a mosque in a nearby Tribal Area had been taken for treatment.

“We had come with our DSNG truck to the hospital where the injured were taken after the suicide bombing of worshippers in the mosque in the town of Jamrud, in the Khyber Agency. When we arrived, we were told that there was a risk of another suicide bombing and that the media should stay away. We followed the police instructions but a policeman hit me from behind while I was talking by phone.”

The three TV men were then taken to the Hayatabad police station, where they were held for several hours until fellow journalists intervened to obtain their release. Khattak said that, while held, the police inflicted serious hand injuries on his cameraman and DSNG operator. “I think they have fractures because the police hit us with great violence.”

The beating of the three Samaa TV journalists came just days after police chief Fayyaz Toroo appointed a commission to examine the growing number of cases of police violence against the media. It was the subject of a demonstration by journalists outside the office of the province’s chief minister and it was also condemned by Khyber Union of Journalists president Arshad Aziz Malik.

Police searched the headquarters of the Urdu-language daily Mashriq, Peshawar’s oldest newspaper, on 6 August claiming that a criminal had taken refuge there. The raid prompted protests by many journalists and, under pressure, police chief Toroo suspended the officers responsible for the raid.

Pakistan is the world’s deadliest country for the media, with eight journalists murdered so far this year.