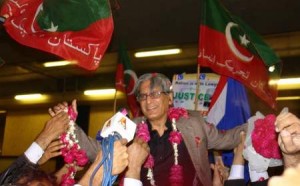 Aitzaz Ahsan’s pronouncements are an appropriate indicator of what his real masters, Aabpara, want to implement.  Going against the explicit proposals of the elected Prime Minister Gillani, the royal servant of the Jihadi judges, Mr. Ahsan called on the army to restore peace in Karachi.

This is rather rich on his part considering that many consider the military establishment as the key player in destabilizing Karachi and other parts of Pakistan.  Since 2008, the PPP has gone out of its way to the extant of alienating its loyalist base in Sindh, to appease the MQM and work with them towards evolving their party (MQM) from a fascist extortionist mafia into a secular progressive ally.  However, inspite of bending over backwards and alienating its other allies like ANP, the MQM has not only failed to accept the divided political mandate of urban Sindh, it has thwarted the PPP-government at every step of the way.

While in government, MQM has enjoyed the benefits of provincial and federal ministeries but has repeatedly betrayed the democratic set up as well as efforts by the PPP-government to take on the Taliban and other extremist groups. Examples include the MQM’s opposition, at the behest of its GHQ masters, to the Kerry Lugar Bill as well as its consistent betrayal, that have not only destabilized the PPP-government but the entire nascent democratic project.

In the current situation, the violence was once again intiated by the MQM against the innocent and multi-ethnic citizens of Karachi.  This should serve as an indication that the PPP leadership’s democratic intentions to keep the MQM in the coalition are wrong.  MQM’s violent tactics of torture, murder, extortion and target killings is now widely emulated across the political divide with criminal elements from all sides engaging in the latest havoc.  However, this violence cannot be equated; the majority of the victims are from those who are not considered to be  part of MQM’s narrow parochial mandate and include an ex-PPP MNA.

In the last week, the Army has signalled its intentions of wanting to come into Karachi and its loyal servants like Aitzaz Ahsan have echoed their master’s voice.  The Army’s interference in Karachi will lead to the same results that its “operations” in Swat and the recent-concluded one in Kurram Agency have lead to: a safe haven for the army’s proxes.  These current proxies are the TTP-Haqqani network in Khyber Pukhtunkhwa and MQM in Karachi.

The choice for the PPP is clear; they have to take on the criminal elements in Karachi, the bulk of which is the MQM and their gangs including one of their proxies that is causing mayhem in Lyari.  While the PPP can easily crackdown on criminal elements supported at the fringes of the PPP and ANP, can they really afford to take on the Pak Army-backed MQM killers?  The outcome of this decision could very well determine the future fate of the current elect PPP government.

As for Aitzaz, he needs to ask Chaudhary Iftikhar and his Jihadi Supremes as to why, after more than a passage of four years, they have still not taken action on the May 12 massacre of PPP workers; ironically killed for protesting the unconstitutional sacking of Chaudhary Iftikhar.  The current CJ was at that time a PCO Chief Justice, serving the Un-Constitutional regime of a dictator General Musharaf since the 1999 military coup.

As someone who played a key role between Gen. Kiyani and his clients, the Sharif brothers in misinforming the US about the importance of reinstating a compromised, nepotistic and corrupt Judge Chaudhary Iftikhar, Aitzaz should be asking why all the Jihadi and MQM killers (Ajmal Pahari) arrested by the PPP government are let loose once again by the Judiciary.

Given that Pakistan army is the key power broker in Pakistan, we can’t ignore that since October 1999, MQM is the only party which is continuously in power in Sindh and/or in federation. The MQM-army cosy relationship is ongoing, as evinced by army’s tacit support for MQM’s massacre on 12 May 2007 and recent synchronized statements by Altaf Hussain and Corps Commanders. All of this appears much more than coincidental. Supreme Court’s soft stance towards army and MQM shows that the unholy trio (army, court, MQM) may be up to something bigger, once again.  The engineered bloodshed in Karachi is another opportunity for the army to not only gain an upper hand with a manufactured favourable perception but also have another opportunity to fleece the State for more funds

The tragic violence in Karachi, started yet again by the racially divisive statements of the MQM has claimed hundreds of lives and shows few signs of abating.  Destabilizing Karachi is essential towards destabilizing Pakistan and such are the tactics of the military establishment to remove governments and install its puppets via the backdoor.   The ANP is not doing any favours by aligning itself with the establishment-backed “Sindhi-Nationalists” either. To bring peace to Karachi, can the PPP government take on the might of the establishment and survive……. 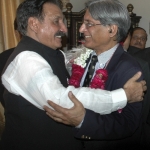 Q2. Who does not acknowledge the damage that his hero Chief Justice Iftikhar Chaudhry has caused by refusing to take action against those who killed innocent citizens in Karachi on 12 May 2007?

Q3. Who is Ajmal Pahari and who released him? What happened to the 26 target killers arrested in January 2011?

Q4. Who is speaking in Aitzaz’s disguise?

LAHORE, Aug 22: Senior PPP leader and noted lawyer Aitzaz Ahsan has supported the call for army operation in Karachi to restore peace in the city. Talking to reporters at an Iftar party he had hosted for his constituents on Monday, he said there was no harm in calling the army to restore peace in Karachi. “Nobody should be afraid of the army operation because it will be carried out under the supervision of Sindh’s civil administration,” he said. He said peace can not be restored in Karachi till the city was deweaponised through an operation. “We must consider army option seriously because Karachi is the country’s economic hub and if it is disturbed the whole country will be disturbed.” Citing examples of Britain and India where the army was called out whenever civil rulers felt the need for it, he said the Pakistan Army was a national institution serving under the minister of defence and not an alien force.

Q5. When was the last time there was a martial law in India or Britain?

(Acknowledgement: The idea of this post came to mind after reading a couple of tweets by two fellow LUBPians. Thank you!)