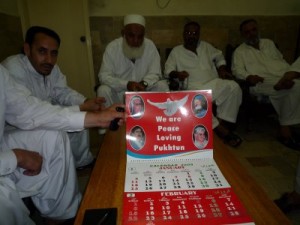 Ludwig von Mises, a leading laissez-faire economist of the twentieth century, wrote that intellectuals shape and form public thought, not the masses.

2800 killings in past eighteen months in Karachi haven’t awoken our intellectuals, Human Rights Groups, Civil Society or Media. They only  cherry-pick issues that suits their airs. To top it all, the ‘free media’ has totally mystified the brazen audacity and terrorism of the city’s dominant political force, specially the news channels where managements are either terrified or overwhelmed by the netherworld’s supporters. Geo TV reporter, Wali Babur’s murder is a Case Study.

Doctors and reporters are supposed to be sans frontiers but in recent shooting the former community at a local hospital refused treating ethnic Pakhtoon victims and the latter kept parroting only Kati Pahari while other parts of Karachi were burning. Even Dawn and Express Groups painted the events differently by inventing  parallel theories of Taliban and Armed Gangs.

Let’s analyze the flawed arguments which blanket criminality of the so called ‘Middle Class Force’ the MQM.  Of all the  ‘Target Killings’,  90% were ethnic Pakhtoon yet it isn’t called genocide.  Of these 90% more than 95% had nothing to do with Armed Gangs or ANP but were killed for swelling the  Metro demographics.  The fact that Karachi harbors more Pakhtoons than Kabul, Kandahar, Quetta or Peshawar is quoted as regret by ‘intelligentsia forgetting that the ‘dominant majority’ was zero percent of the city before Partition. At least 100 years before that exodus, Pakhtoon’s presence in the port is traced.

Militarized and centralized Paksitan has left nothing for Pakhtoons in their lands to survive on.  Besides being from minority province, their land has been rented to foreign powers for war games, for the last three decades, obliterating the indigenous social fabric, weaponizing the belt heavily, cultivating religious extremism  and overburdening  its economy by refugees’ influx. In short the State of Pakistan viz-a-viz the Military has manipulated, maimed and maligned the ethnicity directly or through it’s Frankenstein monsters, be it the Taliban or the MQM. Like LeT, LeJ, SSP or TTP; our military’s backing of the ‘Literate’ goons for the last three decades have mutated them into Gods of  the Metropolitan.

The most pathetic argument used to massage public opinion is that ‘It’s  their  fight for the local bodies.’ Does democratic struggle means ‘local bodies’ over ‘dead bodies’?  Abbas, a social commentator from Karachi puts it in these words. ” Also, the emerging narrative is that the PPP scuttled the utopic local bodies government system which was the sole preserve for MQM. The local body system in effect separated Karachi from Sindh and gave  it a disproportionate share of the revenue. Let us not forget that it is Sindhi, KP and Punjabi produce and Balochi minerals transported by Pushtuns that is an essential revenue driver for Karachi Port”,

“PPP and ANP have a dismal record in providing services to Karachi and other than the ethnic bogey, have no policies to solve the problems of Karachi. Karachi has made a bargain with MQM and that bargain is that MQM is thuggish party but it also delivers! MQM is a thuggish party but it also delivers’’ said Feroz Rafi Khan, a Pakistani Canadian intellectual.  Abbas continues….

“The local bodies allowed the MQM carte blanche to develop a few areas at the expense of the rest of Karachi and the rest of Sindh. Also, the very same urban chatterati that goes into paroxysms about PPP corruption and ANP medievalism completely ignores how Mustafa Kamal and his gang made billions in kickbacks from constructing a few flyers and bridges in the better areas of Karachi while neglecting PPP and ANP areas. The local bodies in effect created a parallel system and allowed Karachi to link up with the Center while separating from the rest of Sindh.”

Be it Lawyers Movement, a road accident, un-happiness with Islamabad, a blast in a religious procession, PPP minister’s remarks or milking of the coalition, MQM’s strategy is one and the same, Kill Pakhtoon and burn their  livelihood. The only difference is that we are not allowed to call it Pakhtoon Hunt. In the very heart of an international city, Ethnic Pakhtoon is persona no grata in MQM’s strongholds. “We didn’t see a single Pathan dry fruit seller the whole winter in Gulistan e Jauhar” says my Mohajir Flat mate from Karachi.

‘’MQM is a threat to status quo’’. Gimme a break! A produce of the same womb that bore the Taliban and religious fanatics could not make it outside Karachi and Hyderabad in the past three decades and suddenly it is viewed as harbinger of change.

“Political power by definition is the ability to make others do what they normally would not do.” Says Feroz Khan and I agree except when it is done at gun point. It is this definition where Mutaheda fails to qualify as political power. Now that Zardari-Gillani Government; to keep itself to power, agreed to MQM demands, the city returns to calm. A simple question would be that if a single hush from London can stop the civil war, how not that a wink from the same Don didn’t started it.

As I end up this article the news of 31 fresh killings, including a PPP MP, reach me. This time its Lyari and Balochs under attack. It’s premature to say anything about it but Mr. Mehmood Khan Achakzai speech in NA on May12,2007 incident comes to my mind. He said that if murderers of 42 innocent protestors were not brought to justice, Karachi would soon be ruled by Lebanon styled militias. Here we are and have nothing more or less. They could neither live peacefully with Hindus in united India nor have learnt to live in harmony with their fellow Muslims in their new project. What are we suppose to say.