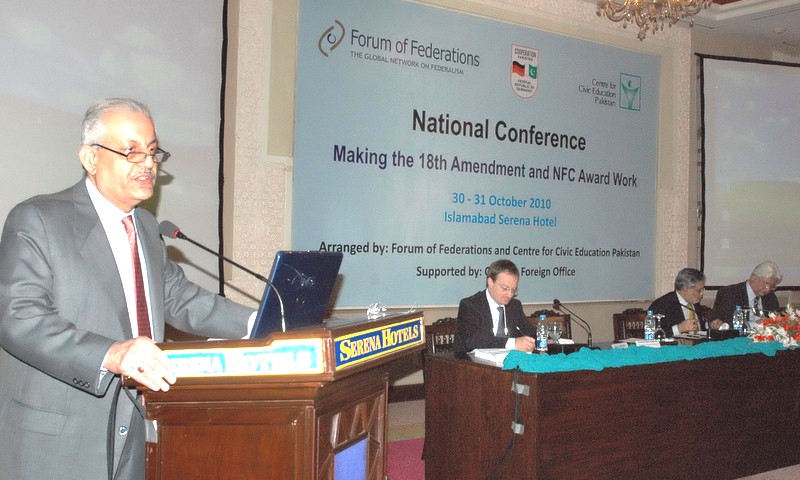 The 1973 Constitution given by Shaheed Zulfikar Ali Bhutto was democratic, federal and parliamentary. It had a vision of Federalism in terms of fiscal devolution, ownership of resources, participation in policy formation and collective decision making.

This was a fundamental change from earlier Constitutions. Unfortunately with deliberate intent various provisions of the Constitution, in particular, relating to provincial autonomy, were circumvented with mala fide intent. These were subsequently defaced by amendments through military dictators. The Eighth Amendment, the Legal Framework Order and the Seventeenth Amendment virtually made Pakistan a unitary State.

As a consequence the provinces were deprived of their economic, political and cultural rights. This alienation fanned nationalist movements, people were drawn away from the political mainstream. Horizontal and vertical polarisation of society peaked, groups called people to armed struggle for restoration of their rights—supporters of the Federation were under a shadow. In these circumstances Parliament had to steer the transition to democracy and the revival of federalism.

In this atmosphere of suffocation Parliament rose above the political divide, buried the hatchet by unanimously enacting the Eighteenth Amendment. It has built on the edifice of the 1973 Constitution, the institutions of the CCI, NEC, NFC and Parliament have been strengthened.

It has corrected the imbalance of powers between the President and Parliament, curtailed Presidential and Prime Ministerial discretion, deleted the Concurrent List, provided a transparent methodology for the appointment of Judges and the Election Commission. It is the first Parliament that declared the Legal Framework Order, 2003, and its amendments to have been made without any lawful authority and to no legal effect, it repealed the Seventeenth Amendment.

In order to empower citizens three new Fundamental Rights have been added, Article 10-A, right to a fair trial, Article 19-A, right to access to information and Article 25-A, State shall provide free and compulsory education to all children between ages five to 14.

To address the feeling of deprivation in the Principles of Policy, Article 27 provides that the areas unrepresented in the service of Pakistan shall be adequately redressed; Article 38, says that State is to implement the shares of all federating units in federal services including autonomous bodies; Article 37 requires the State to ensure inexpensive and expeditious justice to citizens.

In terms of enhancing federalism and provincial autonomy over 30 Articles have been amended. The major amendments are the deletion of the Concurrent List; governor to be a registered voter of the same province; strengthening the CCI; addition of reservoirs in the complaints as to the interference with water supplies; provincial representation in the NEC; the federal government, prior to taking a decision to construct hydroelectric power stations, shall consult the provincial governments; the share of a province in each Award of the NFC shall not be less than the share given in the previous Award; provisions regarding the proceeds of federal duty of Excise from natural gas and oil, levied at the wellhead and of the royalty shall not form part of the Federal Consolidated Funds and shall be paid to the province in which the wellhead is situated; provinces may raise domestic or international loans within such limits and conditions as specified by the NEC; 50% ownership of the mineral oil and natural gas deposits within a province.

For good governance, the amendment places a limit of 11% of the total membership of Parliament / Provincial Assembly for future Cabinets. The Parliamentary Committees for appointment of judges and the Election Commission provide equal membership for treasury and opposition benches. Seventeen ministries have been devolved to the provinces.

The new system should provide transparency, minimise individual discretion, strengthen democratic institutions, ensure independence of the judiciary and provide good governance. The economic empowerment of the provinces should lead to a gradual alleviation of poverty which would also impact terrorism.

The amendment sends a strong political message. Within parliament, on board Baloch nationalists have shown that through a political dialogue constitutional amendments and their implementation is possible to secure your rights. In the context of Balochistan particularly, there is a message for those who have taken up arms for the achievement of their political agenda to reconsider their course. It strengthens the hands of those who seek their rights within the Federation.

It has averted an Arab spring-like situation, given the political polarisation, alienation, economic deprivation, extremism and terrorism; had the question of provincial autonomy not been addressed it would have acted as a catalyst.

The Eighteenth Amendment has given birth to a Pakistani federalism, a Pakistani experience, a Pakistani renaissance for the rights of individuals and the provinces. If accomplished, it can fall in the category of the Orange and other revolutions by being the “legislative revolution”.