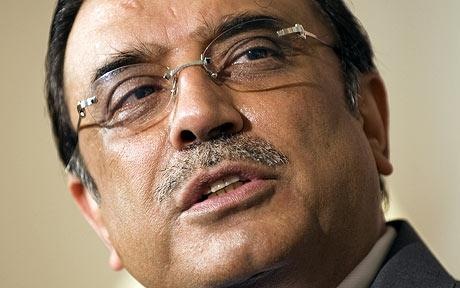 What comes to your mind with the mention of Asif Ali Zardari? “A cunning, vile, and corrupt man,” said my 19 year old cousin. This was a good summation of what the urban middle-class thinks of him. The more I hear people talking about him the more I am convinced of the power of propaganda. “Give the dog a bad name and hang him,” Zardai once said about himself. That is what is at work here.

Despite what has been said about him, Zardari did have a political background. His father Hakim Ali Zardari entered politics well before Partition and was a member of the Khaksaar Tehreek in 1931. He was first elected to the National Assembly in 1970s. All this talk of Zardari as a political orphan who hogged the Bhutto dynasty upon marriage with Benazir, is a non-starter. In Benazir’s husband, the Bhutto family wanted someone who would remain loyal to her. That is exactly what they got in him. For Zardari, family would always come first. This was the case at the time of Benazir’s death, when he kept the family together. Benazir would often tell close aides that despite his failings, Zardari always remained loyal to the family.

During the ’80s and ’90s Zardari moved from the Prime Minister’s house to prison and back to the Prime Minister house again. All in all, Zardari’s time in prison comes to a total of 11 years. It is ironical that if convicted, all of the cases he is implicated in have a combined sentence of only 10 years. This easily makes him the biggest political prisoner of the country. In 1999, he was almost tortured to death, with the government alleging that he attempted suicide by cutting off his tongue. He developed spondylitis because of rickety police van rides from Karachi to Lahore for court hearings. He could either sit on a wooden bench or stand straight. He started walking with a cane and had to undergo physiotherapy. It is well within imagination that during this time, Zardari could have brokered a deal with the establishment, broken with Benazir and went into exile. Instead, what happened was that Benazir was murdered and Zardari took over a country divided on ethnic lines, on the brink of an economic meltdown, with a full-fledged insurgency in Balochistan and an ever growing militant threat.

Today, the greatest criticism of the Zardari regime is its massive involvement in corruption. While it is impossible to defend the regime’s corruption and nothing can excuse it, one is forced to think that the whole idea of corruption is inverted in this country. The narrative of corruption has two problems. The first is its singular focus on elected politicians. One hears a lot about politicians being corrupt but almost nothing about the enormous amount of corporate corruption. Corporate corruption is the most heinous form of corruption today. However, in Pakistan it would seem that every corporation is working well within its boundaries and is completely cognisant of its responsibilities. A major part of this corruption is related to the Pakistani military which has the greatest economic stake in this country. Are all these military-run business giants working cleanly? Is the military’s $17 billion business empire clean? Is the acquisition of 12 million acres of public land by the military clean?

Although it is the Government’s responsibility to weed out this menace, it would be wishful thinking to demand that a weak civilian government stand up to an overpowering army. Nevertheless, it is the parliament, and not the judiciary, which probed corruption in National Logistic Cell (NLC), a military-run organization, and indicted two Lt. Generals and one Major General. The Supreme Court today is in essence the anti-corruption regime of this country however almost all of the cases it has taken up involve civilian politicians. It does not receive much attention that the judiciary’s own performance with regard to disposal of cases and prosecution of terrorists has been questionable.

The second problem with the corruption narrative is the middle class’ concept of corruption. For the urban middle class a non-corrupt state would mean a laissez fair system which would leave the rural population at the mercy of the corporates. The Pakistani term for such a system is ‘meritocracy’ or ‘technocracy’. This is also why the urban middle class, which dominates the media, bureaucracy and military, fails to understand why the same ‘corrupt’ politicians come back to power through elections. Rural voters vote for people who they think can best connect them to the ‘English speaking state’. They are concerned with immediate issues such as tube-wells, canal lining, roads, employment, sanitation, water. They live largely aloof from the issues that the mainstream media raises. This is also the reason why Jamshed Dasti was re-elected despite a fierce campaign against him by the middle class.

The middle class rhetoric against ‘corruption’ is not unique to Pakistan. In India, a similar movement led by Anna Hazare calls for passing a Lokpal (Ombudsman) Bill which would make elected representatives accountable to a committee of ‘good’, ‘clean’ but un-elected citizens. Unlike Pakistan, however, the Indian media has been very critical of this movement. It is also worth mentioning that corruption in Indian politics way surpasses the corruption here. To cite an example, just the 2G spectrum allocation scam cost the Indian exchequer $39 billion.

So while we castigate the current regime’s corruption, which we should, we should also be cognisant of the parallel narratives of corruption. In this country politicians have continually been booked for corruption while everyone else goes scot-free.

Finally, there have been substantially positive things that have been initiated by this regime but they need several articles to discuss. For now we can do with just noting them. The NFC award, the 18th and 19th Amendments, the Devolution plan, and the Benazir Income Support Program are all success stories to say the least. It is for the first time that we have a functioning Parliament (in which the opposition and government coexist), an independent and aggressive judiciary, and a free media, all at the same time in this country. All of these are institution-building measures which shall have a lasting impact on the country’s political dynamics.

(The writer works with a think tank in Islamabad. These are his personal views. His email is abdullah.muhammad.zaidi at gmail dot com.)