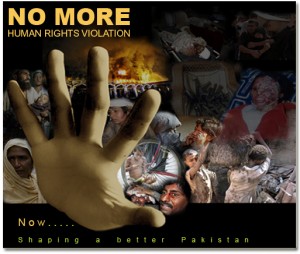 Human Rights organization Amnesty International (AI) has urged the government to take prompt steps to save the lives of 10 detained and missing Baloch persons, who, it believes, face death risk.

The Express Tribune quoted the organization as saying that the ten men were taken to the custody on February 18, along with 19 others, during a Frontier Corps (FC) search operation in the town of Tutak, in Balochistan’s Khuzdar district.

Of them, 18 have since been released while the body of Maqsood Qalandarani, an activist of the Baloch Student Organisation-Azad, was found in a sack in the Jabal-e-Noor area near Quetta on July 16.

Amnesty International – urgent appeal asking people to write to the Pakistani Government and their own countries diplomatic representatives to take concrete action to stop the increasing number of ‘kill & dump’ operations in Balochistan.

The body of a Baloch student activist was found on 16 July, five months after he was taken into custody by the paramilitary Frontier Corps. Ten other Baloch men, detained at the same time, are in grave danger of the same fate.

The 10 were taken into custody on 18 February, along with 19 others, during a Frontier Corps search operation in the town of Tutak, in Balochistan’s Khuzdar district. Eighteen men have since been released, while the body of Maqsood Qalandarani, an activist with the Baloch Student Organization-Azad, was found in a sack in the Jabal-e-Noor area of Balochistan’s capital, Quetta, on 16 July. Maqsood Qalandarani appeared to have been tortured.

According to local news reports, the police discovered a note in his pockets, saying that he was an “Agent of the Baloch Liberation Army”.

The 10, most of whom are from the Qalandarani tribe, have not been seen since. They are at risk of torture and other ill-treatment, as well as extrajudicial execution. The bullet-riddled bodies of abducted men, many showing signs of torture, are being found in increasing numbers across Balochistan and illustrate a growing trend of “kill and dump” operations in the province.

Between 24 October 2010 and 31 May 2011, Amnesty International recorded 73 enforced disappearances and 108 possible extrajudicial executions of Baloch activists, teachers, journalists and lawyers. At least 93 people out of the total 108 killed had been subjected to enforced disappearance.

Please write immediately in Urdu, English or your own language:

Expressing concern to the authorities that the 10 men (naming them) have not been seen since 18 February 2011 when witnesses say they were abducted by the Frontier Corps;

Urging them to order an immediate and impartial investigation into this apparent enforced disappearance, publish the results and bring those responsible to justice, including those at the highest levels of command;

Insisting that if the men are in custody they release them immediately, or transfer them to an official place of detention and charge them promptly with an internationally recognizable offence;

Calling on them to ensure that none of the men is tortured or otherwise ill-treated, and that all are allowed immediate and regular access to their families, lawyers of their choice and any medical attention they may require;

Expressing concern about the widespread and systematic abduction and targeted killings of political and social activists in Balochistan.