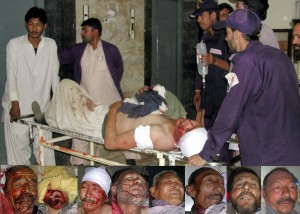 Editor’s Note: We are publishing the following article by Farrukhzad Ali and would also recommend his earlier article, Shia Hazaras of Queta: Entrapped in deep state’s delinquent and obedient proxies – by Farrukhzad Ali.

Currently, LUBP is relentlessly castigated for sowing disunity amongst the self-annointed “Tweeple Brigade”- the 30 odd urban elites who feel that liberalism in Pakistan begins and ends with them.  Our stance in completely different as we feel that we can’t have unity with a group that has the likes of Ejaz Haider as one of its main spokespeople.  How do we seek common cause with those whose main purpose on Twitter is to reinforce the views of the Ejaz Haider types?

This is the same chauvinist who peddles the line of the security establishment and stands thoroughly discredited.  Shaista Aazar deconstructed his false arguements about the Baloch struggle, Farhat Taj tore to shreds his ISPR rubbish that the Taliban are supported by the Pushtuns and now Farrukhzad Ali exposes his attempts to obfuscate the Hazara Shia genocide.  From abusing a Sindhi PPP leader and President of Pakistan and showing a racist disdain in pedding the establishment line on Pushtuns, Hazaras and Balochis, Ejaz Haider stands exposed.

If the Tweeple Brigade can’t handle this reality, then please stop bothering the growing number of individuals, forums and websites that refuse to buy the establishment propaganda.  The latter have decided “No More” while the Tweeple Brigade want to continue milking foreign aid agencies for more money to fund their lavish lifestyles and dubious causes.

As for the embattled Shia Hazaras, they should be under no allusions that this post by Ejaz Haider is not only justifying their continued massacre but is also inciting further massacres by reinforcing the bigotry that Pakistan’s Shias are Iranian fifth-columnists. End Note.

Ejaz Haider recently visited Quetta with the purported agenda of meeting Hazara tribal and religious leaders and Deobandi/Lashkar-e-Jhangvi leaders to inform his readers about the situation in Quetta. But what he has finally produced as a result of his Quetta sojourn is nothing short of an ISPR press release. Athar Abbas has most certainly lost credibility, and needs new faces to deliver his messages.

To be honest, Ejaz Haider didn’t have to visit Quetta to write what he did at the end of the day. He knew what he had to write even before he had left. After having formally consummated his relationship with the ISI, he has proven himself as one of the most treacherous spokespersons of the agency.

In his August 3 article published in Express Tribune, Ejaz Haider tells us that the situation in Quetta is not as simple as it might seem because Hazaras are actually not a persecuted lot, but an Iranian proxy in Quetta who are funded by Iran and operate for Iran’s interests. The miseries of Hazaras are therefore self-inflicted, and they fully deserve the fate they have been subjected to.

The justifications Ejaz proffers to substantiate this buncombe are: the Iranian government invited 170 members from the Hazara community to commemorate Ayatollah Khomeini’s death anniversary this year; the Hazaras celebrated Shab-e-Barat this year by cutting a 40 lbs cake; Allama Domki is accused of being involved in a Deobandi prayer leader’s murder on July 28; Shia clerics indulge in sectarian sermons; and happenings in Quetta are of an action-reaction pattern. These are the reasons which according to Ejaz Haider have resulted in the killings of Hazaras ever since it commenced in the late 1990s.

Let me take each of his claims one by one.

For Ejaz Haider’s information, the Iranian government has been inviting Pakistanis from all backgrounds (including Hazaras) to attend Ayatollah Khomeini’s death anniversary for two decades now, and the list of invitees includes politicians, army officers, journalists, members of several religious parties, as well as ordinary citizens. The list of the invitees also includes names such as Qazi Hussain Ahmed, Munauwar Hasan, and Gen. Hamid Gul. So should we accept Ejaz Haider’s apology that Hazaras are being killed because Iran invited 170 of their members to attend Ayatollah Khomeini’s death anniversary in 2011? By the way, most of the 170 Hazaras who visited Iran this year were actually women and children, for whom the visit entailed no political connotations.

Shab-e-Barat celebrations in Quetta are as old a story as Hazaras themselves, and have never included sectarian sermons. Shab-e-Barat in Quetta, like elsewhere, is celebrated by using firecrackers, holding poetry recital gatherings and cutting of cakes – including one 40 lbs this year, which according to Ejaz Haider, was funded by Iran and resulted in killings of Hazaras. For his information, this wasn’t the first instance of a 40 lbs cake being cut – it is a tradition which has continued for quite a while now. And a 40 lbs cake in Quetta costs something like Rs. 6000, which doesn’t necessarily have to come from Iran. Half a million Shias in Quetta can afford to pool that much money. Ejaz probably mortgaged to Khakis his mind along with his character to become their spokesperson.

Allama Maqsood Domki’s involvement in Maulana Karim Mengal’s murder seems far from possible for several reasons. First of all, Domki – a Baloch – is not a native of Quetta and is therefore disliked by the somewhat ethnocentric Hazaras. During the past decade in which he tried to find footholds in the Hazara dominated areas of Quetta, not only did he fail, he was driven out of the Hazara localities. Assuming that the assassin was indeed Domki’s accomplice and hailed from Dera Allah Yar, can Ejaz Haider educate us as to where could he perish instantly after the attack keeping in view the fact that due to Hazaras’ distinct features and their abhorrence for Domki, he couldn’t seek refuge in the Hazara dominated areas which are the only Shia populated localities in Quetta? Does Ejaz Haider even know that Jaffaria Alliance is dysfunctional in Balochistan and doesn’t even command a dozen followers?

In fact, why should we not assume that Mengal was actually murdered by ISI spooks in order to put the onus on Shias of Quetta (hold all of them responsible), present the situation as an ‘action-reaction process’, and deprive them of even the niggling sympathy they have recently received. Is it too far-fetched an assumption keeping ISI’s track record in view? Is it not rather plausible considering that Ejaz Haider visited Quetta right after Mengal’s murder and followed it up with a lousy article? Should the fact that the incident happened at only a few hundred yards from the FC headquarters be ignored? It adds to the suspicions that no arrest has so far been made in connection to Mengal’s murder, although Ejaz Haider has hurled wild accusations against Domki. If our sleuths can instruct Ejaz to accuse Domki for the murder, they wouldn’t have hesitated a moment before arresting him in case there were evidences of his involvement.

While Ejaz Haider has mentioned that Allama Domki was attacked by Lashkar-e-Jhangvi terrorists in 2009 in which his guard (who happened to be a Hazara policeman) killed one of the attackers, he has carefully eschewed the details that followed the incident. The killed Lashkar-e-Jhangvi terrorist was later presented by the state as an ordinary citizen, and Domki’s guard was charged for manslaughter and obviously so – he had killed an ISI strategic asset.

Ejaz Haider’s claim of indulgence of Shia clerics in sectarian sermons is perhaps the most ludicrous of all. While this may be construed as either their spinelessness or diplomacy, Shia clerics in Quetta do not indulge in sectarian rhetoric. Even while carrying dozens of corpses, instead of sloganeering against any other sect, they conveniently blame either some unknown enemies of Islam, or US and Israel – the easy punch bags. If Ejaz Haider insists he is right in his claim, I throw him a wager to name a single such cleric, or produce a single such sermon (which should most certainly be recorded by the ISI, and will be in easy access to him).

Ejaz Haider’s equation of the death of over 500 Shias of Quetta with the assassination of a Deobandi prayer leader, killed on July 28 is appalling, and characteristic of the cold and inhuman Khaki behavior. Ejaz Haider’s simplistic khaki logic deduces that the situation in Quetta is in fact a two-sided sectarian war, in which both the antagonists are killing each other. He conveniently ignores that Shia killings have been taking place for over a decade now, and during all this period, not a single act of violence can be traced back to them. This is not a sectarian war, but systemic genocide of a single sect. Isn’t it ridiculous to say that Shias in Quetta were killed between 2001 and 2011, because a Deobandi prayer leader was killed on 28th July 2011 by unknown assailants? This is exactly what Ejaz Haider is telling us.

Since Ejaz Haider has heavily relied on Abdul Khaliq Hazara’s views to buttress his hogwash, it is important to introduce the fellow to the readers. On the face of it, Abdul Khaliq Hazara is a secular nationalist Hazara leader, who assumed the chair of Hazara Democratic Party (HDP) after Hussain Ali Yousafi’s assassination.

Ridiculous it might seem, but not so when ISI is involved. I have stated previously that while the duplicitous ‘deep state’ has crushed every genuine secular movement in Pakistan, the secular/nationalist Hazaras of Quetta have had the privilege of receiving maximum state support ever since the Iranian Revolution. During the Soviet War, Hazara nationalists served as ISI’s secure channel to the Hazara factions of Afghanistan, more specifically, the self-professed Maoist groups. They have enjoyed a cozy relationship throughout this period, and what keeps them closer is a magnified Iranian influence in Quetta. The nationalists project it to remain relevant to the deep state, which in turn uses it as an excuse to ruthlessly use Hazaras as bait while pursuing its grand project in Afghanistan. Suffice it to say that Abdul Khaliq Hazara is the incumbent ISI blue-eyed among Hazaras in Quetta.

As previously stated, Ejaz Haider’s purpose of visiting Quetta and penning a concocted version of the happenings there is to allay even the marginal feelings of sympathy for the peripheral Hazaras, in mainland Pakistan. He serves the agenda of his Khaki masters well by telling his readers that Hazaras are not innocent citizens under fire, but Iranian agents who are under strict control of war-mongering Shia clerics involved in murders of Deobandi clerics. By presenting the situation as an action-reaction binary, he tries to deprive Hazaras of the higher moral stead, and reduces them to Lashkar-e-Jhangvi’s level and holds them equally responsible for violence.

By trying to prove Iran and Hazaras as the main culprits who have provoked Lashkar-e-Jhangvi for violence, Ejaz Haider has absolved the Pakistani state, especially the ISI, of any culpability. By doing so, he is insidiously arousing the sentiments of the common Pakistanis against the Shias of Quetta, and sedating their consciences with the allegations of treason and violence against the latter.

Example of an Uncle Tom of Hazara community who flatters Ejaz Haider: