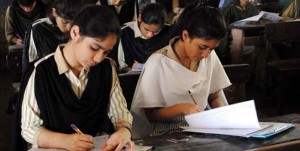 Denial is not just a river in Egypt. It has become something of a personality cult in Pakistan. Nowhere is this cognitive dissonance more visible than amongst the educated who refuse to accept facts and logic, clinging instead to a neurotic persecution complex.

Columnist Khaled Ahmed says: “The vast majority of literate Pakistanis take comfort in ignorance, skepticism and conspiracy theories. The self-glorification of an imagined past matched by habits of national denial have assumed crisis proportions today when Pakistan’s existence is under far more serious threat from fellow Muslims than it was in 1947 from rival non Muslim communities.” What lies beneath this inability to critique and lack of intelligent analysis? Undoubtedly, one’s education influences views on politics and society. As Robert Frost aptly puts it: “education is the ability to listen to almost anything without losing your temper or your self-confidence.”

To sift the chaff from the grain, let us consider a ubiquitous slogan about the ‘ideology’ of Pakistan. A staple of our school textbooks, it echoed in massive public rallies as well as debates on secularism. Pakistan ka matlab kiya? La illaha il lallah (What is the meaning of Pakistan? There is no God but Allah) has become the rallying cry of the campaign to Islamise Pakistani society. Ironically, it is a slogan that was coined long after the creation of Pakistan, but it is now being falsely ascribed to the leaders of the Pakistan movement in 1947.

Religion has often proved to be a powerful binding factor which has merged heterogeneous groups into a distinct nationality. Through appeal to supernatural authority, religion promotes national unity as a divine command. Examples abound in contemporary history: the Greek church as a source for Greek nationalism, the Catholic church as a factor in Irish separatism, Judaism and the state of Israel, Islam and Pakistan.

Soon after he seized power in 1977, General Zia ul-Haq sought to create a nation based on religion rather than on secular principles. An important part of the Islamisation agenda was defining the Islamic ‘ideology’ of Pakistan. In stark contrast to modern textbooks, no textbook written prior to 1977 mentions the ‘Ideology of Pakistan’.

Since education was a key factor in Zia’s Machiavellian manoeuvrings, a presidential order was issued that all Pakistan Studies textbooks must “demonstrate that the basis of Pakistan is not to be founded in racial, linguistic, or geographical factors, but, rather, in the shared experience of a common religion. To get students to know and appreciate the Ideology of Pakistan, and to popularise it with slogans. To guide students towards the ultimate goal of Pakistan – the creation of a completely Islamised State.”

Instead of being a Muslim state as envisaged by its founders, Pakistan was recast in the mould of an Islamic state, where Islamic law would reign supreme. A state sponsored and systematic purging of liberal and secular values of future generations of Pakistan ensued.

History was rewritten to redefine Pakistani as an Islamic society, and no research on ancient India, the medieval period or the colonial era. Our history was linked with the Umayyad and Abbasid caliphates, thus alienating it from ancient Indian history. This interpretation creates a Muslim consciousness that seeks it’s identity outside India.
Historian Mubarak Ali cautions “History should not be influenced by religious beliefs since history has no religion. Pakistan came into being in 1947, but our history existed before this which cannot be deleted.”

History textbooks written soon after Partition – a time when the grief of shattered families who experienced communal killings was at its peak – show a more liberal mindset. The history of the subcontinent was taken to start with the ancient Indus valley civilisations rather than with the conquest of India by the first Muslim invader, Mohammad bin Qasim, in 712. In contrast to today’s history books, these books contained discussions of the empires of Emperor Ashoka and the Maurya dynasty. Has there has been a deliberate revival of communal antagonism over 30 years after Partition? Undoubtedly, the permanent militarisation of society requires a permanent enemy.

Although Edward Everett may state that “education is a better safeguard of liberty than a standing army”, the task of defending Pakistan’s ideological borders has been entrusted to the military as they are defenders of the ‘faith.’ Textbooks extol the achievements of Muslim conquering heroes, as well as those of the Armed Forces. In sharp contrast, no contributions by any heroes in fields like education, medicine, law or social work are highlighted.

September 6 commemorates the defense of the country against an Indian attack in 1965. According to our textbooks, it was India which attacked Lahore in the middle of the night, without any provocation, but our army won this war. The reality is that Pakistan started the 1965 war on August 5 by sending soldiers into Kashmir and India retaliated the following day.

Instead of the soul searching and accountability undertaken by nations like Japan and Germany after devastating wars, our history textbooks explained the separation of East Pakistan in 1971 as an evil design by India which created the guerrilla group Mukhti Bahini in order to seize Pakistani territory. Although we lost half of Pakistan, there was no mention of the gross inequalities which led to the grievances of the Bengalis. Tens of thousands died, millions were displaced, atrocities were committed and the country was rent asunder. But the guilty were never punished.

The seeds of the distortion of history and the preponderance of religious dogma which were sown decades ago are bearing fruit today. Examples from the curriculum designed by the Federal Ministry of Education abound. The Social Studies textbook for Class 7 says: “European nations have been working during the past three centuries, through conspiracies on naked aggression to subjugate the countries of the Muslim world.”

14-year-old students of Pakistan Studies are being taught that: “one of the reasons of the downfall of the Muslims in the sub-continent was the lack of the spirit of jihad.”

13-year-olds are instructed: “In Islam jihad is very important…..The person who offers his life never dies….All the prayers nurture one’s passion of jihad.”

Thus, a primary and secondary school environment is being created which is nurturing prejudice and extremism. “College and university come much too late; change must begin at the primary and secondary school level,” sums up physicist and lecturer Dr Pervez Hoodbhoy.
Although religious schools or madrassas in Pakistan are often blamed for breeding extremism, only 6 per cent of children are educated in these schools. Furthermore, research does not confirm the link between madrassa education and terrorism. The cause for the intolerance experienced by Ahmadis, Hindus and Christians lies in public education, structured as it has been to defend Pakistan against some phantom enemy. Non-Muslims are forced to read the same textbooks which contain derogatory remarks against Hindus, e.g being eternal enemies of Muslims. Our myopic educational system discourages questioning and causes ethnic and religious minorities to be viewed with suspicion.

Pakistan is primarily a young country, so it is the youth which is severely impacted by rampant unemployment, inflation, corruption and violence. Many amongst this disenchanted segment have started seeing religion as their anchor and are attracted to demagogues like Zaid Hamid. A self-proclaimed jihadist who claims to have fought against the Soviets in Afghanistan, Hamid banks on the insecurity and frustrations of college students and television viewers. Just as Adolf Hitler dwelt on Germany’s ‘wounded honour’ in his famous beer-hall oratory in Munich (where he promised that Germany would conquer the world), Hamid calls for the Pakistan Army to go to war against India and liberate Kashmir, Palestine, Chechnya and Afghanistan.

Our curriculum stresses the formal and ritualistic aspects of Islam, as against those which emphasise social justice. Science and secular knowledge are regarded with contempt. Dr Hoodbhoy says, “I have never seen a first-rate Muslim scientist become an Islamist or a terrorist even when he or she is a strong believer. But second-and third-rate technologists are more susceptible. These are people who use science in some capacity but without any need to understand it very much—engineers, doctors, technicians, etc.—all of whom are more inclined towards radicalism. They have been trained to absorb facts without thinking, and this makes them more susceptible to the inducements of holy books and preachers.”
The steady diet of religious fundamentalism and blind faith has clouded objective and rational thinking, and transformed Pakistan from a moderate Muslim-majority country into one where the majority wants Islam to play a key role in politics. A 2008 survey by World Public Opinion found that 54 per cent of Pakistanis wanted strict application of Sharia. The British Council polled 1226 young Pakistanis between 18 and 29 in 2009 and found that ‘three-quarters of all young people identify themselves primarily as Muslims. Just 14 per cent chose to define themselves primarily as a citizen of Pakistan.’

Pakistan’s skewed priorities may account for the huge amount spent on its ever increasing “defence needs” and only 1.5 per cent of it’s GDP on education. But lost in the brouhaha over the lack of access to education is the dire need to revise the dogmatic and distorted school curriculum. As the pendulum swings in Pakistan between radicals and moderates, we need our friends to stand with us and demand that Pakistanis don’t need an education which stunts, blinds, distorts and deadens any more. As Alvin Toffler said, “The illiterate of the future will not be the person who cannot read. It will be the person who does not know how to learn.”

Maheen Usmani is a freelance journalist. She has reported on varied subjects, ranging from socio-political issues to sports, travel, culture and counter terrorism.

Click here to post a comment
Scope of constitutional provisions and space for provincial autonomy
Hizb al-Tahrir: A New Threat to the Pakistan Army? – By Arif Jamal