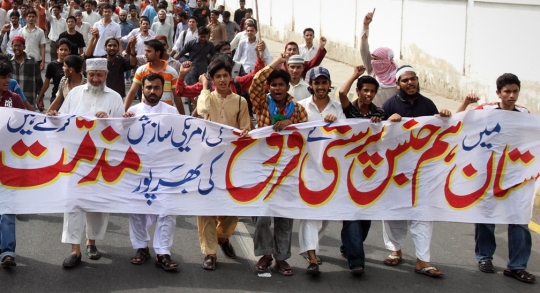 Now that its been sometime since the US embassy Pride event took place I believe it is time to shout back at the ensuing homophobia resulting out of it. The resultant fear of many queers that a public anti-homophobia discourse would only be harmful and call more of uncalled attention to the LGBT community made me contain my thoughts and emotions for the right time. The pride event was held on June 26 but reported later on, and that is when the trouble started.
The fact that the pride event was held by an American embassy, made it a field day for Islamist parties in Pakistan. According to Jamaat E Islami homosexuals “…don’t deserve to be Muslim or Pakistani, and the support and protection announced by the US administration for them is the worst social and cultural terrorism against Pakistan,”.
Once again the Mullah pressure groups have deemed it their responsibility to assure us who is and is not a Muslim. If anything the Islamists who are largely responsible for the notorious image of Pakistan in the world “don’t deserve to be Muslim or Pakistani”.

What social and cultural terrorism? Homosexuality was,is and will be an aspect of Pakistani society,just as it has been present in all times and places. Rants by the religious parties of homosexuality being a western import are laughable, especially given the amount of same-sex pedophilia cases against Mullah class itself. 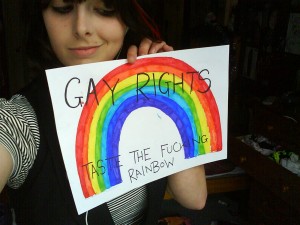 Nevertheless, Uncle Sam must understand it has to stop poking its nose unnecessarily and that may one be secular, liberal or conservative, there is hatred for American foreign policies across the board. Given the situation American embassy’s insouciant behavior to issue a statement showing encouragement to LGBT activists is plain shocking. Have they hit the same road of complacence British Empire did? Hold a pride event for sure, as US embassy is technically considered American soil. Call whomever you wish. But why endanger already handful of LGBT activists? An event consisting of mere seventy-five people decided behind the closed and protected walls it was time for gay rights in Pakistan, showing their oblivion to the turmoil Pakistani state at present is going through and the disastrous result it could result in.

It was all the more astonishing for me, when I heard a fellow queer activist inform me how she was told by someone she knew in the embassy that US would not be willingly to give asylum to any homosexuals in Pakistan. No security. No funding for community building in Pakistan. No asylum for the bunch of activists, on whose head danger already looms, in case extremist parties come for their lives. But oh well! We have the wonderful words of encouragement from Mr.Richard Hoagland.
Our kind request,and I speak for a plethora of queer community in Pakistan, to any embassy, especially Anglo-American, is to kindly deal with such a sensitive issue in the light of present circumstances in Pakistan, for it can easily endanger many a lives, after much consultation and farsighted critical thinking.

In  a country where raped women still await justice, where Ahmedis are targeted out and about and where every other person roams around the street as a guardian of Islamic faith ready to slit the throat of dissident it seems we’d have to work thrice as hard as India or US for Gay equality.
It would be much wiser if US pushes Pakistan for a more Secular constitution and to provide security to the warriors of humanity. The rest than then would be the job of activists and communities themselves. The change has to come from within and not without. Perhaps Anglo-American officials need to embed this notion. At most they can be our allies with unflinching support. But given the history of American politics it seems like a silly idea.

The anti-Gay protests in Karachi,Lahore and Islamabad were not as much about as homosexuality but US. Its an old trick called “killing two birds with the same stone” and it just could not have been more perfect of an opportunity for the anti-American rightwing. Raising a fear of impending doom were homosexuals to be allowed basic rights and freedoms,right wing made sure to fuel anti-Americanism. So were this pride event held by Dutch or Swede embassy, it would not have led to so much clamoring by the rightwing and Islamists.And so it puts an extra pressure on Britain and US when dealing with advocacy of minorities.

As for the Jamaat E Islami and other religious parties and clerics, it is kindly advised to focus on and label much more ruthless event and acts as inhuman and vile than what goes between two consenting and loving adults of same sex who harm none. I am waiting for them to take out the rally next time against those who bury five women alive in Balochistan. And it would be really appreciated if they first try to eradicate pedophilia and same-sex activities within their own class and institutions before barging into other people’s homes.
They are also advised to read or listen to  Amreen Jamal, Imam Muhsin Hendricks or Imam Daayiee Abdullah next time before they go around as the only authority on the story of Lot and his people with their orthodox analysis.

Click here to post a comment
Instead of blindly following Saudi Arabia, use scientific method for moon-sighting
How long will we stay in denial? By Ahmed Iqbalabadi