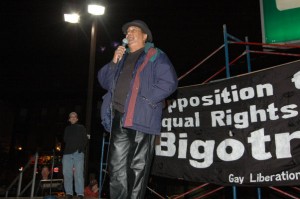 Editor’s Note:  We are reproducing the glowing tribute by CBS for Ifti Nasim.  His death reminds us of the intolerant society we have become.  Our LGBT friends and supportors have informed us that there are different interpretations of the religious texts on this issue and not all of them take the harsh and intolerant view that has become the State-sponsored mainstream.  Needless to say, we  do not believe in selective campaigning for rights and feel saddened at the persecution and marginalization of those who are  LGBT.

Partition resulted in an imported bigotry that was previously not welcome in the land of Ranjeet Singh, Bulleh Shah, Bhittai, Khushal Khan Khattak and Lord Gautam Buddha.  The soil that still fondly remembers Sachal Sarmast will always have a liberal ethos in the honesty of its masses (not elites).  We hope that one day, more Ifti Nasims do not leave our land but enrich our culture and society with their poetry and universal human rights activism. Discrimination and persecution on the basis of one’s sexual orientation is something we oppose and feel that one’s personal life should be just that – personal.  Religion should not be the business of the State, Islamofascist Judiciary notwithstanding. (Maula Baksh Thadani)

(AP)  CHICAGO — Men and women in conservative dress sat quietly before the start of a what promised to be a typical Pakistani Muslim community gathering, until Ifti Nasim — the gay Pakistani Muslim poet, activist and Chicago radio show host — strode in wearing leather pants, a leather overcoat and pimp hat with feather.

The display elicited smiles, and some eye rolls, from audience members. But most at the gathering for dignitaries and business leaders were captivated when he read poems dealing with being Muslim in a post 9-11 world, with some yelling the Urdu word for “repeat” throughout the performance.

It was a not an uncommon reaction to Nasim, who for most of his life managed to occupy an unusual — and often difficult — space. He lived as an openly gay Muslim man in Chicago’s South Asian enclave, while garnering respect from more conservative Muslims with his volumes of poetry, provocative humor, flamboyant fashion and advocacy for several Chicago organizations.

Nasim died at a Chicago hospital late Friday following a heart attack, his sister Ajaz Nasreen told The Associated Press. He was 64.

“It is a big loss for the community,” said longtime friend and business partner Rana Javed, who ran a local South Asian program, “Sargam Radio,” and newspaper with Nasim for years.

The respect Nasim earned in the community was evident at his funeral services and burial Saturday, when hundreds packed into a Chicago mosque to pay their respects and read Quran. A religious memorial service was scheduled Sunday and community leaders said public memorials with poetry readings would follow in the coming weeks.

Nasim said he always knew he was gay, but living openly in his native Pakistan wasn’t an option. He remembered first reading magazine articles about being gay in America and developing his love of fashion by flipping through Vogue.

“In Islamic society, gays have no place,” he told WBEZ-FM in Chicago. “America sold the gay culture to me back home. They’re living happily ever after in America. That’s my place, I’ve got to go to America. I was sold. Completely sold.”

Islam forbids homosexuality. While attitudes toward gays have changed among some in Muslim countries, being gay is still considered widely unacceptable and homosexual acts in some Muslim countries are punishable by whipping or death.

Nasim, who later became a U.S. citizen, grappled with those issues in his activism and poetry, which also dealt with global politics and advocacy for Muslims after the Sept 11, 2001, terrorist attacks.

Nasim wrote numerous books of poetry, including one titled “Narman” — a word for hermaphrodite — which was believed to be the first book of gay themed poetry to be published in the Urdu language. He also founded SANGAT/Chicago, a South Asian lesbian, gay and transgender organization.

In 1996, Nasim was inducted into the Chicago Gay and Lesbian Hall of Fame for “his courage as an international ambassador of tolerance” and his leadership in the city.

Friends and family say he often disarmed people — particularly conservative Muslims — was his sense of humor, magnetic personality and work in the community. If he wasn’t spotted at tea shops and kabob restaurants along Devon Avenue, a stretch of South Asian businesses on Chicago’s North Side, fliers for his events and advocacy were. Most recently, he worked on earthquake and flood relief.

“People would find him just to joke around,” Javed said.

But it wasn’t always easy: Some family members stopped speaking to him because of his sexual orientation and he had his share of critics, or people who dismissed him as nothing more than a clown.

Nasim said he waited to come out to his family until he immigrated to the U.S. and was financially stable.

“They thought ‘gay’ is something, a passing state,” he told WBEZ. They said, “‘Go get married. You’ll be fine. A good woman will do a lot of good to you. Excuse me, like it’s some kind of disease? Take two aspirin, you get up in the morning and you’ll be O.K. Honey, it doesn’t work that way.”

His sister, owner of a popular bookstore in the city’s South Asian neighborhood, said her brother drew people to him with his generosity. She said it was a shock when her brother first came out, but he was better known for his advocacy. Even in their own family, he was instrumental in bringing siblings and family members to the U.S.

“He was our Columbus,” she said in Urdu. “He brought us all to this country.”

Click here to post a comment
Mullah Omar is part of the problem, not the solution
Playing the bogus card of ‘sovereignty’ —by M Husain Sadar