The Saudis as well as their Gulf Arab cousins are arming the Taliban. This influx of foreign money and religious ideology is causing irreparable damage to the national identity and integrity as well as the centuries old cultural heritage of Pakistan 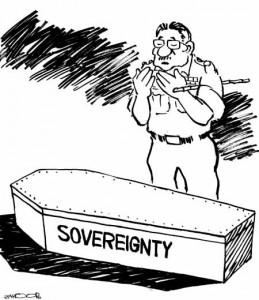 Since its birth as an independent state, the Pakistani military establishment has focused exclusively on projecting India as our most dangerous and eternal enemy. A constantly repeated argument in support of this assumption is that India has never reconciled itself with the creation of Pakistan and will swallow it quickly if and when the Pakistani defence forces are not strong enough to defend it.

It is no secret that the Pakistani people have never experienced a truly democratic and publicly accountable government during their entire turbulent history. The country has been ruled by an unholy alliance, which has always been led by the top military brass with key memberships from powerful landlords and wealthy business class.

Consequently, the survival of any government in Islamabad or even in any provincial capital depends upon its ability and willingness to deliver whatever the military needs or demands. No central government, including that of today, has ever dared to deny or question the need and the justification for annually budgeting outrageously huge defence allocations.

As a result, Pakistani politics at every level has been and still is a helpless hostage to the ‘men’ in uniform. Pakistan may be a unique country in the world; it designs and implements all its national policies, goals and objectives for the exclusive benefit of its military and security establishment.

Most often, other important sectors such as economy, education, health, research and development, modern infrastructure, etc, which are crucial for creating a civil, stable and healthy society have never received proper attention and adequate funding. Consequently, the country is unable to progress rapidly in order to become self-sufficient and avoid its perennial dependence on foreign aid.

Soon after becoming independent, India chose to adopt a ‘neutral’ foreign policy and became a founding member of the non-aligned group of countries. On the other hand, Pakistan quickly became a close ally of the west and joined two military pacts. Both the Central Treaty Organisation (CENTO) and the Southeast Asia Treaty Organisation (SEATO) were designed and controlled jointly by the US and British defence experts for containing the military advances of the emerging communist power, the former Soviet Union. This meant that Pakistan decided to take sides in the Cold War between the so-called west and the east.

The Pakistani ruling elite thought — and wrongly so — that becoming a member of such alliances was essential for further strengthening Pakistan’s defences by sheltering under the safety net provided by advanced and very powerful members of these pacts but more specifically, the US. Moreover, the US could provide adequate financial support, better training for the military and supply modern equipment for its armed forces. However, the west, especially the US, valued Pakistan’s ideal location for building and operating military bases in order to spy on the Soviet military installations and their operations.

Unfortunately, Pakistan turned out to be the loser in this game. As we know neither the US nor any other member of these pacts came to fight along with Pakistan during various bloody and costly border skirmishes with India. Since Pakistan is a much smaller country and has a weaker economy as compared to India, the outcome of any fight between these two countries was easily predictable. Even after losing one half of the country and after the demise of both CENTO and SEATO, successive Pakistani governments got even closer and economically and militarily more dependent on the US. Obviously, in return the US has continued to use Pakistani territory and its military for achieving its strategic goals and objectives. The U-2 spy plane incident, which happened almost half a century ago, had already proved that the US was using Pakistani territory and its airspace for clandestine flights.

Recently, the US discovered that bin Laden was living comfortably for many years among the Pakistani military elite. The US also knew that the Pakistan Army was playing a double game so they killed Osama Bin Laden without informing anybody in Pakistan.

The question is: why did the military brass in Pakistan become angry and suddenly aware of Pakistan’s ‘national sovereignty’? Obviously, the Pakistani ruling elite is using the bogus card of ‘sovereignty’ as a cover to hide its total failure and impotence in safeguarding the territorial integrity of Pakistan.

During its strong hold on power for more than half a century, the military establishment has also spread its power and influence in private enterprises, airports and other infrastructure, universities and even the mass media. By promoting its daily ‘peacock-like’ dance ceremonies on the Indian border at Wagah, publicising its ceremonial functions and parades and air shows on important occasions, the Pakistani military elite has firmly established itself as the ‘sole guardian and defender’ of the land in the eyes of the ordinary Pakistanis.

However, the death of Osama bin Laden and the total inability of the Pakistani security forces to defend even its own headquarters and sensitive defence installations have exposed the naked truth. After having spent major part of their earnings, the Pakistani people now realise that their military and security forces are involved in every business except doing their primary job, which is to protect the people and their country.

As the saying goes, “The higher they go, the harder they fall.” By inviting Saudi Arabia to join the US and Pakistan in driving the Soviet army out of Afghanistan, late military dictator General Ziaul Haq let in an alien but very cruel and ruthless species called the Saudis into Pakistan. They brought in constant supply of petro-dollars, attractive titles such as “the custodians of Islam’s two holiest places” and their rigid, discriminatory and violent version of Islam.

This continuous flood of money is being used to buy politicians, military brass and in building religious schools, training imams, providing funds for building and operating mosques and madrassas. In addition, the Saudis as well as their Gulf Arab cousins are arming the Taliban. This influx of foreign money and religious ideology is causing irreparable damage to the national identity and integrity as well as the centuries old cultural heritage of Pakistan.

Obviously, the Saudis have also created more dangerous fronts for both the politicians and their ‘controllers’, the Pakistani military brass. Now, in addition to the Pakistani military and political elite, there is a third establishment that is very resourceful, fanatic and extremely violent. It is composed of religious groups, which are funded, controlled and directed by the Saudis and other Arab royals.

Judging from the uncontrolled daily mass murders and killings in Pakistan, it can be safely assumed that the Pakistan Army has neither the needed capacity nor the determination to stop this carnage.

However, this time their failure cannot be covered by a ‘sovereignty’ blanket. Hopefully, the Pakistani people will finally wake up and demand a complete and effective civilian control over the entire defence establishment.

It is time to send all soldiers back to their barracks.

The writer is a Canadian of Pakistani ancestry. He has taught Environmental Sciences at several Canadian and foreign universities