Recently I happened to read Shashi Tharoor’s response to Pakistani “liberals”, particularly to Ejaz Haider which itself was a rebuttal to Aatish Taseer.

After reading Mr. Tharoor’s piece, despite some bold and honest statements in it (e.g., the fact that several Pakistani writers conveniently forget that 1965, 71, Kargil wars were started by Pakistan), I feel deeply insulted.

I feel insulted because Mr. Tharoor has lumped all Pakistani liberals into one category. It seems that he and his counterparts in Pakistan are conflating “social liberal life style” (English speaking, whisky drinking, selective human rights supporting, elitist liberals) with political liberals (i.e., those who are currently being massacred by the military state and its various proxies because of their commitment to democracy, human rights, equality and liberty).

I know some pro-liberal-unity pals in Pakistan (e.g., Raza Rumi, Beena Sarwar, Marvi Sirmed) may not like what I am going to say in this post, but frankly I don’t see Pakistani liberals as one homogeneous group nor do I see any need for all Pakistani liberals to be united into one group setting aside their differences, which in my view are very substantive than trivial or abstract.

For example, my friend Raza Rumi falls into same fallacy last week in his piece in Express Tribune titled “The charge of the secular brigade” when he writes:

“Critics of state-sponsored jihad are few and largely confined to the English press. The Urdu media continue to present jihad as central to Pakistan’s raison d’etre.”

What Rumi fails to acknowledge here is that Pakistan’s (fake liberals dominated) English press is as pro-military establishment as is the (right-wing dominated) Urdu media. It’s only the difference in tactic, vocabulary and style which distinguishes one from the other, otherwise, barring a few exceptions, both segments of Pakistani media remain almost completely silent on mass murders of the Balochs, Pashtuns and Shia Muslims in general by the military state and its various proxy organisations (e.g., Taliban, Sipah-e-Sahaba, LeT, JeM). See for example, how Pakistan’s English speaking urban liberals reacted to release of an ASWJ-LeJ terrorist Malik Ishaq. Instead of blaming the ISI-backed, PML-N affiliated Supreme Court, they conveniently blamed the police and the prosecution!

“During the year 2011, three political assassinations — those of Salmaan Taseer, Shahbaz Bhatti and Saleem Shahzad — should have spurred on activists to fight for secularism, moderation and a progressive Pakistan. However, this did not happen. The rightwing calls them agents of the US and India, but so-called secularists are not shy of calling each other spokespersons of the military and the ISI.”

Apparently Rumi forgot to acknowledge that it is the political liberals of the PPP (and other progressive parties eg ANP, MQM etc) who are paying the price of their commitment to liberal values, while urban liberals remain silent spectators or complicit to the military state narratives. For example, while right wing products of the Deep State’s Jihad Enterprise were busying slaughtering Benazir Bhutto, Salmaan Taseer, Shahbaz Bhatti and other PPP leaders and workers, several pro-establishment fake liberals (most of them in the English media) were busy in blaming the victim, i.e., Asif  Zardari and the PPP for these murders. For example, read these two posts: A plan well executed, and Three musketeers and the “PPP abandoned Salmaan Taseer” narrative.

Therefore it is important to understand that those (fake) “liberals” who favour or reinforce the killers’ narratives cannot and must not be lumped or united with those liberals who are being massacred and then blamed for their own murder.

“Salmaan Taseer had emerged as a towering figure for a secular, tolerant Pakistan due to his public profile and proclivity to not mince words against bigotry. His death could have been a rallying point. However, subsequent activism against his murder remained thin and ineffective.”

Of course, Rumi fails to acknowledge that a major element of the urban fake liberal activism after Taseer’s death was to blame the very party, the PPP, which Taseer so proudly served and died while defending its ideals of equality and social justice. See for example, how some of the urban elite fake liberals tried to attribute Taseer’s murder to a lone wolf instead of the Jihad Enterprise of the military state which has brainwashed and produced thousands of Mumtaz Qadris and Malik Ishaqs.

Here’s another example. In his extensive three articles series on Balochistan (recently published in daily Dawn), leading Pakistani liberal writer Cyril Almeida tried to equate the Baloch genocide by Pakistan army with the violence by the Baloch nationalist groups. However, he did not write a single word on Shia Hazara genocide by the army backed Deobandi Jihadi sectarian monsters (ASWJ-LeJ). The same author shamelessly justified notable Baloch scholar Professor Dashtiyari’s murder in his column on Balochistan by blaming him for his support to violent Baloch nationalist groups. This is what Mr. Almeida wrote:

When asked about the allegations that Dashtiyari had been killed by the intelligence agencies, a senior security official responded defiantly, “Who owned his death? BLA did. They put out statements eulogising him. Who was he close to? What were his politics?”

Multiple sources confirmed to Dawn that Dashtiyari, while never having taken up arms himself, was close to insurgent groups and at various times had exhorted violence against the state and other ethnicities living in Balochistan.

Of course, ISPR, ISI and MI are some of the “multiple sources” used by Pakistan’s fake liberal journalists who frequently recycle and reinforce the military state narratives in Pakistani media.

As my fellow authors and I have explained in various posts on the LUBP blog, many of Pakistan’s urban elite fake liberals are nothing but an extension and an accessory of Pakistan’s military establishment (just as Islamo-fascists are), who carefully guard their own socio-economic and political interests and lifestyle by remaining complicit to or silent on Pakistan army’s brutalities to democracy and the people.

Therefore, it would have made much more sense if instead of directing his piece at all Pakistani liberals, Mr. Tharoor had directed it at urban liberal elite, also ‘lovingly’ known as fake liberals.

The following description of Pakistani urban liberals in Mr. Tharoor’s article is remarkably similar to what Tarek Fatah terms as ‘Islamopatriots’.

Pakistani liberals are particularly prone to the desire to prove themselves true nationalists; it is the best way to ensure that their otherwise heretical opinions are not completely discredited by the men in uniform who hold the reins of power in the state.

It is of course a fact that several urban elite liberals are known for promoting their economic interests as consultants or development consultants, and are probably tasked to develop pro-military establishment hate-India, love Taliban narratives in Pakistani media.

Overall, I like Mr. Tharoor’s piece except the last para in which he made a generalizing and sweeping statement about all Pakistani liberals. For example, I invite Mr. Tharoor to read LUBP, one of Pakistan’s most popular (and obviously controversial) alternative media websites, which does not recycle the military state sponsored lies and narratives on India.

Also, in my humble view, by ignoring voices such as Dr. Ayesha Siddiqa, Kamran Shafi, Dr. Taqi, Mr. Tharoor has shown that he remains unaware of the internal heterogeneity of “Pakistani liberals”. While Mosharraf Zaidi, Ejaz Haider and some others in Pakistani media are widely known to have a pro-military establishment stance, Kamran Shafi and others are a victim of the military establishment and its various agencies.

In the Islamo-fascist military republic of Pakistan, liberalism is a lucrative industry for urban elite and their middle class flatterers and aspirants. It brings fame, wealth and power. Therefore, Mr. Tharoor’s criticism should be rather directed at Pakistani “urban liberals” who remain in the main urban-centric and military-establishment-centric.

This post is motivated by the following tweets by a fellow social media activist @laibaah1 who remains a fierce critic of Pakistan’s military establishment and urban liberals. Here’s a snapshot:

Vicky 22/07/2011 – 08:50pm
“But Pakistani liberals are particularly prone to the desire to prove themselves true nationalists; it is the best way to ensure that their otherwise heretical opinions are not completely discredited by the men in uniform who hold the reins of power in the state.” The line sums up the situation in the Pakistani ‘liberal’ media. I think you were very lenient on Ejaz Haider, he is an out and out establishment columnist. Don’t use his very infrequent outbursts against the army as a yardstick. I still remember his article explaining why the Mumbai ’08 attackers couldn’t be Pakistani…. even though journalists by then had already located Ajmal Kasab’s family in Pakistani Punjab.

india_review 22/07/2011 – 04:57pm
This is excellent. Especially the last line. In fact had Salman Taseer been alive he would have given the same reaction to Aatish’s article as these liberals are giving. The design of Pakistani liberals has a pattern in itself.

Pakistan is a nation whose sole identity is based on being “anti-Indian” and while our liberal army of journos on Twitter pour all their love on the Pakistani liberals every time, they forget that the people who have been born into believing that being Pakistani means being anti-Indian, a slight stir will make their true natures reappear.

Pakistanis are miserable. lost and sucked into this never ending tunnel of darkness; the only thing they remember now is what they were told before they were thrown inside this dark tunnel, “India is an enemy, you shall be anti-India”.

Iftikhar Alam Khan 22/07/2011 – 04:52pm
“A Pakistani liberal is, after all, a Pakistani before he is a liberal.” The comment is slightly harsh, I understand that religious. fundamentalism is so strong in Pakistan that the so-called liberals cannot survive there without establishing their nationalistic credentials. In the grab of their patriotism they try to solve their problems of survival in that country. There is a dire need of secular symbols or heroes in Pakistan. With much difficulty they could project Mr Taseer and Mr Bhatti as symbols of secularism and democracy. But, unfortunately,just one article of Taseer’s son has washed away the whole shine from his father’s image. Therefore the panic reaction of the Pakistani liberals is quite understandable and instead of blaming them we should try to sympathise with them. 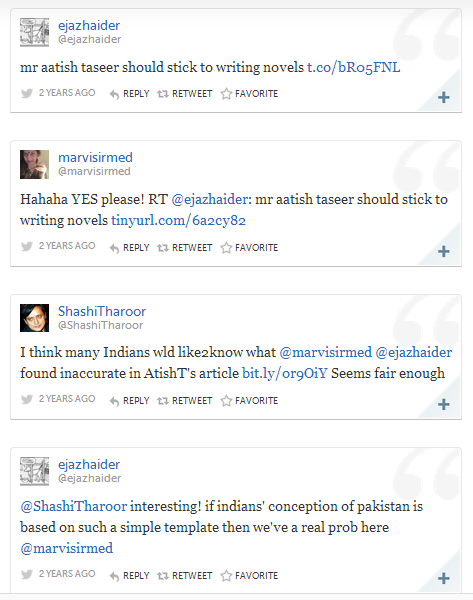 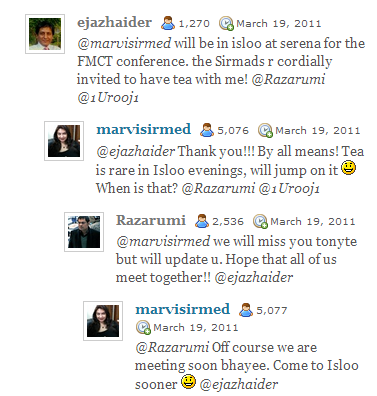