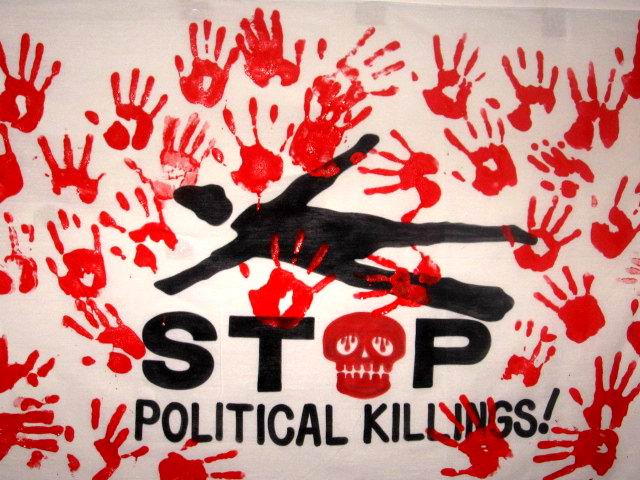 Killing these Baloch is a serving Islam’ said one of them. They chanted “Allahu Akbar” and one moved forward opening fire at me’, said Nasir Dagarzai Baloch who miraculously escaped death the first time after being shot and dumped by Pakistani army. He wasn’t so lucky the second time.

The story is of young teenage Nasir Dagarzai Baloch who was first abducted on January 23rd, 2011 along with other colleagues Rasool Baksh, Abid Saleem and Mehrab Baloch. On January 25th, two days later, they were shot at and dumped in Panjgoor area. Nasir Baloch miraculously, indeed, made it alive besides being extremely wounded and dumped.

After being brought to hospital in Panjgoor, Nasir Baloch was shifted to Quetta as his condition was too severe and needed extensive care. Due to continuous visits from intelligence agency personnel in Quetta hospital, Nasir was then shifted to home and the rest treatment was carried out there.

After four months of slow recovery, Nasir Baloch was abducted the second time on May 25th, 2011 while travelling from Kharan to Quetta on the way near Lakpass. This time the army personnel abducted his brother along.

Nothing was known of Nasir until his bullet riddled mutilated body was found in Western Bypass area of Quetta on July 17th along two other Baloch’s, who were later identified as Maqsood Qalandarani and Murtaza Sarpara.

While Nasir made it alive the first time and was recovering, he expressed what he had gone through in army custody. He explained how a dozen of army personnel jumped into the house where Rasool Baksh, Abid Saleem, Mehrab Baloch and him were present. They snatched the earrings and rings of the women present in the other room and locked them along their children. Nasir Baloch had told his friends how they were blindfolded and tortured when army took them away.

“There was this dark room, people were hanged upside down above us.” Nasir had told one of his friends. There came this old white bearded man the first day and said:

‘Look, I’m in the status of ablution from past 25 years. I haven’t committed any sin since I grew up. If anyone lies to me, I instantly come to know about it through my afflatus. So now you guys tell me how many people have you killed?’

Nasir and Mehrab replied, god being their witness they never killed anyone. The old man then took off his knife and cut a small piece of flesh from Mehrab’s thigh and kept marking Nasir’s chest with the knife. Meanwhile another soldier pushed Abid Saleem to the wall and hammered a nail on his hand where he screamed and went unconscious.

Nasir explained further; the next what he remembers, a soldier rubbing an unknown white powder around his wounds which made his entire body and mind gone warm. Abid and Mehrab were tied with electric wires and as soon as they give them electric shocks, they’d agonize like a fish out of water. The torturers kept saying:

‘You’re enemy of Allah, his prophet and Islam. You kill Punjabis here, and we’re here to safeguard them. Any Baloch who’d say wrong about any Punjabi, We will cut off his tongue!’

Nasir had said they were then not questioned about anything. It was just different torturers with different torture tactics by then. The other day that same old bearded man showed up again and asked them not to force him to commit any sin. We could only hear and could not speak. He ordered one of his men to untie our hands and all of a sudden they attacked Mehrab breaking his arm. They did the same with Abid Saleem and then came for me to break my arm, Nasir explained to his friend. All of them went unconscious and when they came back to conscious they saw Abid Saleem’s body hanging in the middle of the room. They had hanged him.

They then took Nasir Baloch tied up in one jeep. Nasir thought he was lucky as they were going to let him go. They stopped the jeep, took me out and I saw them lining up in front of me. One of them moved forward and preached:

‘As we’re Allah’s army and fighting for Allah the almighty only, And these Baloch are infidels.. They’re backed by Indians and Israel, our enemies. Therefore, killing them is serving Islam!’

They all then chanted “Allahu Akbar” and one moved forward opening fire at me. The next I opened my eyes, I was in the hospital.

That was Late Nasir Baloch’s story he told his friends. Interestingly, recent videos and reports of Taliban killing others show the exact same manner of the one ”Pakistani Army ”using. Or let’s say the other way around.