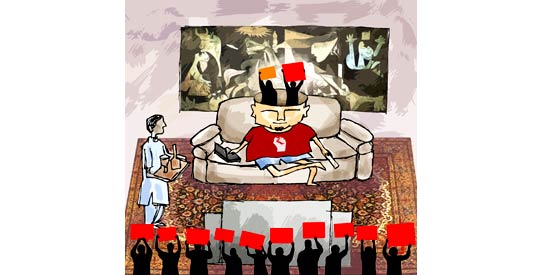 There have so far been three major occasions in which Pakistani middle class has broken away from its traditionally conservative disposition to come out and announce ‘revolutionary’ political aspirations.

The first time when this class began demonstrating political assertiveness was in the late 1960s when the bulk of its youth began to air grievances against Pakistan’s military-industrialist nexus headed by the first military dictator, Field Martial Ayub Khan.

Keeping in mind its inherent conservative outlook, one expected the middle class to oppose a secular-capitalist military dictatorship by siding with the mainstream anti-Ayub religious parties. But the many young men and women who led the revolt against Ayub turned sharply leftwards, gallivanting towards ideas such as socialism and social democracy, largely expressed through political organisations such as the nascent Pakistan People’s Party, National Students Federation and National Awami Party.

Young middle class Pakistan’s romance with leftist ideology lasted till about 1974, until its ideological darling, Z.A. Bhutto, gradually dumped hyperbolic leftist action to play a more pragmatic brand of politics. Middle class leftist groups on campuses began to succumb to infighting and disillusionment and the vacuum was gladly filled by the electoral rise of petty-bourgeois student parties such as the Islami Jamiat Tulaba (IJT).

The IJT’s rise on campuses was symptomatic of the anti-Bhutto and anti-left murmurings that had started to gather steam within the urban middle class, especially in the face of Bhutto’s half-baked socialist policies and increasingly autocratic behaviour. By 1976, the middle class youth, which, in the 1960s and early 1970s, had resonated progressive proclamations, now set themselves to rise once again, but this time they rose in search of an Islamic political and economic order.

Thus began the second phase of middle class-driven agitation in Pakistan that peaked with a right-wing movement against Bhutto’s ‘democratic dictatorship’.

Interestingly, whereas middle class youth had attacked military and industrialist instruments during the anti-Ayub movement, the anti-Bhutto agitation was openly patronised and at times funded by the industrialists. It culminated in a military coup toppling the Bhutto regime, and with the arrival of Pakistan’s third military dictator, General Ziaul Haq, who cleverly adopted the movement’s Islamist idiom.

Throughout the 1980s, the middle class remained split in their support for Zia’s rather bizarre political-economic edifice that crudely fused so-called Islamic policies with a free-flowing version of third-world capitalism. As the progressives and the conservatives went to war on campuses and in the streets, the middle class emerged feeling exhausted by the time of Zia’s violent death in 1988 and the restoration of democracy.

Only minimal political activity was witnessed from this class in the 1990s when Benazir Bhutto and Mian Nawaz Sharif unwittingly played in the hands of Zia’s ideological remnants in the intelligence agencies and the big businesses. In Karachi the Urdu-speaking urban middle class embraced a new party, the MQM, and were embroiled in the political turmoil that accompanied the state’s operation against the supposed militant outgrowth of the MQM.

It was during this decade also that that the middle class, especially in Punjab, started to slide backwards into its customary conservative disposition when a new generation of Pakistani bourgeois began responding to social and religious changes enforced during the Ziaul Haq regime.
This tendency exploded into prominence after confusion and identity crisis that followed the tragic 9/11 episode. Gradually large numbers of young middle class men and women became interested in ultra-conservative fringe groups headed by drawing-room preachers and televangelists.

As the 2000s wore on under the country’s fifth military dictator, Pervez Musharraf—who played a cosmetic role of a moderate—the state and the media failed to arrest the Islamisation trend that grew even further from the rugged mountain areas to the drawing rooms of urban Pakistan. In fact, the ballooning electronic media ended up facilitating the born-again variety of middle class conservatism by adding another batch of religious talking heads to ideologically and, more so, commercially cater to the bourgeoisie’s desire to give its born-again status a political lining as well.

Thus arrived the middle class Pakistan’s third agitational initiation. But the interesting thing is, this time the initiative is largely cut off from the country’s mainstream political route, and has taken the shape of electronic lobbying (blogs, SMS, emails, etc.). What is even more interesting is that though these cyber and TV lobbies are portraying themselves as an alternative movement, the truth is, these foyers are mostly riddled with a fusion of convoluted leaps of logic, a knee-jerk mentality and the kind of conservative mindset that was constructed by the ‘establishment’ and politico-religious parties of Pakistan decades ago.

So consequently, what we have at hand as urban middle class ‘activists’ are actually figurative sheep (single-filed mobs), but which, thanks to the mentioned narrative that they have developed, have grown fangs. Retro-reactionaries posing as revolutionaries. Unless this section of the middle class decides to work within the mainstream political edifice of Pakistan and participate in the evolving democratic process (instead of being repulsed by it), it will remain no more than an irritant having only a nuisance value, becoming the harbingers of a TV lounge revolution, at best.