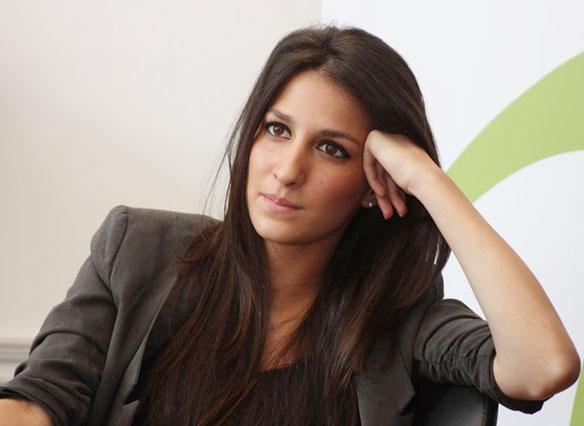 Shehrbano Taseer became the official spokesperson of her family after her father Salmaan Taseer, the governor of Punjab, was assassinated in January this year. But Shehrbano is more than just a vocal member of the family. She has also become the voice of reason and resistance, a representative of progressive Pakistanis, speaking out against the growing extremism in the country. And when you hear her speak, about her father’s murder for instance, she makes clear that it’s not just a personal matter but a national one too.

Following her father’s murder, she was interviewed by Barkha Dutt and Sonia Singh for NDTV, Riz Khan and David Frost for Al Jazeera, Rachel Maddow for MSNBC, Brian Lehrer for NPR, Munizae Jehangir for Express TV, and also featured on BBC Hard Talk, BBC Radio, CNN and Voice of America.

Shehrbano recently visited the UK to share her story. Originally scheduled to speak only at the House of Commons in London, Shehrbano also delivered talks at other places that approached her, among them Chatham House and Cambridge University. Before her trip to the UK in March, Shehrbano had addressed the UN in Geneva on the invitation of Human Rights First and prior to that spoken at the Atlantic Council, the Hudson Institute, the Middle Eastern Institute, NCA, the Quilliam Foundation and the Aspen Institute. In July this year, Shehrbano has been invited to travel to Lithuania with Hillary Clinton for a social media and human rights conference.

Additionally, Shehrbano makes use of social media platforms such as Twitter to raise awareness about the rights of the disadvantaged, more specifically women and minorities. Though public policy and not journalism was her area of interest, journalism just being something she stumbled into, she says: “I love politics and I love writing … and journalism is addictive!” As a journalist for Newsweek Pakistan, Shehrbano has been very outspoken about matters not only concerning her father’s death, but also issues such as the Mukhtar Mai case. She has written for Newsweek’s international edition, The Times UK, The New York Times, the Guardian, Express Urdu and The Daily Times, and serves as editor for Sunday Times magazine, while the family business is taken care of by her mother and brothers.

Asked whether she would ever enter the political arena like her father, she responds with, “Never say never, but I don’t think I will be involved in politics any time soon. Behind-the-scenes work is often more effective.” Even when talking about the difficult stuff, Shehrbano’s mien is calm. She has expressive eyes and she conveys a lot through them – at times confidence, at other times exasperation. Somewhere, there’s pain too. And though there are times she feels frustrated, she says, “Pakistan is my country and my home. I will never leave.”

Q: Were you a journalist before January 4 or have you ‘blossomed’ into one after your father’s murder?

A: No, I have been working with Newsweek Pakistan since September 2010. Before that I worked with Pakistan’s Ambassador to the US, Husain Haqqani. I graduated in May 2010 from Smith College and applied for a job with Newsweek when I came back to Pakistan, which I got. I keep writing though, and I love politics, so all this has just fallen into my lap.

Q: Why do you think there hasn’t been much vocal support for your father but rather ‘silent,’ personal condolences?

A: There is a pervasive atmosphere of fear; everyone is scared and backed against the wall.

Q: Do you feel that the media has been insensitive about talking of your father’s murder with you, for example all the minute details of the actual assassination, or is it something you believe you have to live with?

A: Some have been intrusive and insensitive, but that comes with the territory. I do feel, however, that the media played an atrocious role before and after my father’s murder. Their role is to inform and educate the public, but there was no fact-finding, no probing as to what the blasphemy laws are, how they came about, the numbers of the convicted or the lives that have suffered. There were just these right-wing pundits, who call themselves journalists, coming on television and screaming bloody murder. Airtime was given to some banned militant groups, such as Sipah-e-Sahaba, to come and rile up the public against my father. The media misrepresented what he said; they made something that was about humanity into something about religion and blasphemy. The English channels behaved responsibly, but the Urdu media in Pakistan is immature and sensationalist. It was pure incitement to violence and murder, hate speech under the guise of freedom of speech. Even after the murder, some newspapers carried editorials glorifying my father’s tragic murder.

Q: In hindsight, do you feel there is something your father could have done differently?

A: No. My father was in his perfect constitutional duty as the governor; he did nothing wrong. I don’t care what he said or how he said it – he didn’t deserve to be shot 27 times for it. And the second that people and society begin to take this apologist route, where they give justifications for these atrocious acts, that’s when we know we are failing as a nation. We are proud that he stood up against this clerical tsunami. He lived courageously. 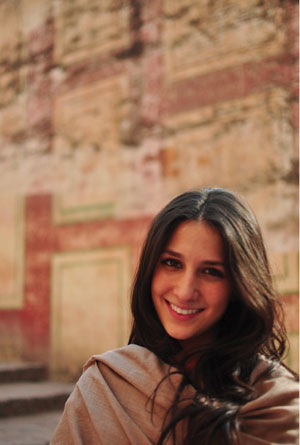 Q: Is there really no religious tolerance in Pakistan at all, or is it just a section of the population that is intolerant?

A: When Shahbaz Bhatti was killed, he was organising open panels and debates to talk about other religions. In schools, teaching Islamiat is mandatory but there is no study of comparative religions. There is no tolerance in Pakistan.

Q: Do you feel the public in Pakistan is ready to hear your part of the story?

A: I have been speaking at international forums, for example at the UN in Geneva, the House of Commons and before think tanks in the UK. I’m also travelling to the US next month to speak in Aspen, St Louis, NYC and DC. I wanted to wait a bit before I spoke in Pakistan but the debate needs to be started. The trick is not to associate my face with it, but have other speakers too. I will soon, when the time is right.

Q: You’ve mainly blamed the madrassas for the growing extremism in Pakistan. Don’t you think other factors are also at work?

A: My grandfather went to a madrassa and turned out to be a progressive poet, who later studied at Cambridge University. He was a progressive, liberal, thinking man. But now the madrassa curriculum is all about teaching Wahhabism, Salafism and militant, hardline stuff. Madrassas are teaching young children, the future of Pakistan, to be hate-mongers and to have a very narrow worldview. They think that the only contribution they can make to Islam and to the world is jihad, and the only way to achieve that is through violent means. Yes, there are many problems, such as the lack of education and economic opportunities, but religious extremism is the main culprit. It’s a mindset that is taking root in Pakistan.

Q: Your father wanted the Blasphemy Law to be amended. Do you think the implementation of the law is worse than the law itself?

A: The problem is not in the law, it’s in the conviction rates. If you look at Saudi Arabia and Pakistan, the conviction rates are skyrocketing. In Pakistan, for example, since 1986 over 500 Muslims, 340 Ahmadis, 119 Christians, 14 Hindus and 10 others have been charged under the Blasphemy Law. Moreover, 32 of the accused – and two Muslim judges – have been mowed down by Islamist vigilantes. Since January 4, the day my father was assassinated, there have been 32 known cases in which almost a 100 people have been affected. Some of the cases have included the blasphemy accused, who have been exonerated, only to be extra-judicially gunned down. Others have been murdered in their prison cells. Christian homes have been burnt down in broad daylight by mobs, led by the local cleric in Gujranwala. The stories are chilling and the finality of the punishment does not match the senselessness with which accusations of blasphemy are made.

The laws are vague and open-ended and what happens is that anyone can accuse anyone of anything. In a country like Pakistan, where passions run high, these laws have unintended consequences. Perhaps they were made in good faith, but it needs to be understood that you cannot protect a religion. Hate speech or incitement to murder and violence should be outlawed because in order to protect a religion, other human rights are being foregone: the right to belief, speech and, ultimately, even life.

Another problem is that these cases are handled in lower courts with session judges who are dictated to by the local cleric. So they don’t want to be on the wrong side of the cleric. They pick up people and toss them behind bars for life without even a chance of a trial.

Q: Would you then say that religion is inherently a big problem in Pakistan?

A: Religion should never be a problem, especially not Islam. It’s peaceful, uniting and beautiful. However, this archaic business of legislating morality and not being a secular country is what’s wrong in Pakistan. The problem lies with using Islam as a political tool; manipulating and exploiting Islam for political mileage.

Q: Do you think that Pakistan’s history and culture, especially that of the Punjab, accounts for the jihalat (ignorance) prevalent in many recent cases that have shed negative light on Pakistan?

A: Yes, Punjabi culture also adds to the jihalat. We revere people like the Mughals who were responsible for massive book burnings, public murders, and who spread religion in an unfortunate way. Lack of education and economic opportunities always factor in. Also, like I said before, extremism is a mindset and these guys are most powerful in the Punjab where the provincial government has allowed them to run rampant. Many people are uneducated and that provides a breeding ground for problems that can fill the vacuum in people’s lives. Consequently Pakistan, at this stage, cannot contribute to the world economy.

I cannot stress the lack of education enough – for example, 16% of the federal budget is spent on the military but only 2% on education.

Q: Is there any hope left for Pakistan?

A: Of course. Pakistan can be characterised as a work-in-progress. We are a very resilient people and have come out strong. Look at how we pulled ourselves up after the most devastating floods in our history – we had a bumper crop this year. We had a bloodless shift to democracy unlike in South America for example, where it is often violent. Seventy per cent of our population is young and we have immense entrepreneurial opportunities. Our tourism industry should be up there with Italy! We have an independent judiciary and a free press, but this terrible period in our history, this cancer called terrorism and all this extremism has crippled us. Pakistan is a victim too and we are bombed daily. We are living in a bad period, but it’s one that we will overcome. It’s going to get a lot worse before it gets better, but I have immense hope for Pakistan.