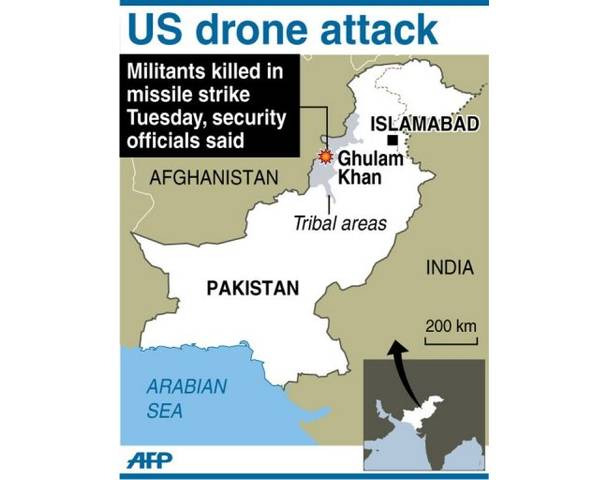 The latest news about war in Afghanistan, which is making headlines, is the suspension of US military aid to Pakistan. Among other things, the rationale given by the US administration is the refusal of Pakistan’s military to allow further use of Shamsi Airbase for launching of drone attacks.

Drone attacks have recently attracted a lot of controversy and are vehemently opposed in Pakistan by the nationalist circles. The sentiments against drones are not restricted to “loss of sovereignty” but are also supplemented by continuous reminders about loss of innocent lives. And yes, the critics are not just restricted to ultranationalists in Pakistan but also include some western liberals who construe drone attacks as a symbol of traditional American hegemony. In fact drone attacks have actually “united” apparently very diverse voices.

Before presenting my take on the issue of the drones, I would like to fully admit that these attacks do result in the loss of innocent lives as well. To deny an obvious reality would be intellectual dishonesty and whether we support or oppose the drone attacks, we need to ensure our credibility remains intact. Yes, there is loss of life and it is tragic. But the situation is akin to a kidnapper hostage scenario where you have to take an action even at the risk of hurting some of the hostages to prevent larger loss of life and to also avoid being blackmailed by the kidnappers.

Moreover, things have to be viewed in much broader perspective in a complicated situation like war in Afghanistan. If there were no drone attacks then the alternative would have been a full-fledged ground invasion which would have actually entailed much greater loss of innocent lives. The areas where militants are hiding are not an easy terrain from military ground invasion’s perspective and therefore elimination of militants through full scale ground invasion will result in much greater collateral damage. In addition such an invasion will require much greater role of the Pakistan army which in turn will create far greater political repercussions. In fact, Pakistan army has been involved in full scale ground offensive before and there was wide spread hue and cry over the army being used to kill Pakistan’s “own people”.

I have heard a number of times that bringing development and education in those areas would cure extremism. Assuming that there is some linkage between these variables and extremism, we would still need to weed out the already entrenched militants to give ourselves ANY realistic chance for development process to even initiate. Militants have to be eliminated and there is no question about that. You cannot get a foothold into the area without at least first weakening them enough and drones are one efficient method of doing that.

However the biggest opposition to drones is coming from those who claim that drones are a blatant violation of the sovereignty. One of the most hyped slogans on the national media in the past few years has been of National Sovereignty. And nowhere is it raised with more intensity and ferocity than when a drone attack takes place. As the evidence has kept on mounting over the years that a significant number of militants are homegrown and have now turned against the state, the old conspiracy theories which used to brand them as “strategic assets” of the West have lost much of their credibility. Now the new fad is to mourn the so called loss of sovereignty.

Is the sovereignty really violated? The answer is a tricky one because in purely theoretical terms perhaps it is. But realistically it is not violated because the areas where drones are aimed do not have the effective writ of the Pakistani state. In real terms sovereignty is not there in the first place because if it was there those areas would not have become open sanctuaries for the militants. Sovereignty is underpinned by state’s monopoly over physical violence and virtual absence of state in a state syndrome. And those areas depict failure when measured against these yardsticks.

Over the years the Pakistani establishment and a series of governments have literally watched helplessly as militants use those safe sanctuaries to promote terrorism in the mainland. If anything, the actual violation of sovereignty is being carried out by the militants rather than the drones which are aimed at eliminating them! Realistically speaking drones are helping the Pakistani state to establish sovereignty. Of course due to the widespread anti-American sentiments, which are continuously whipped up by the mainstream media, it is impossible for a large number of urban middle class to understand it. Over the years, the urban population has developed a knee jerk reaction where anything connected with the US always ends up provoking hyper emotions which in turn makes it impossible to have rational deliberation.

What has also surprised me is that often the past war in Afghanistan in 1980s has been blamed for the present mushroom growth of extremism in the border area of Pakistan and since USA was one the prime stakeholders in that war therefore it also gets its share of criticism. Keeping this historical perspective in mind those who blame USA’s 1980s war (particularly some of the Western liberals who are also critical of drone attacks) should actually expect it to clean up the mess. Elimination of extremists whether through drones or military action, if rightly viewed, actually is American repayment of the historical “debt” it owes.

Finally, drone attacks are aimed at killing militants in a targeted manner compared to suicide blasts which are conducted by the same militants to kill innocent people indiscriminately. More than 35,000 people in Pakistan have died due to religious terrorism and yet our media and urban middle class is more worried about drones which aim at perpetrators of those horrendous crimes. We are worried of violations of sovereignty whereas the sovereignty in real sense does not even exist.

Pakistanis and some of the western liberals need to look things in proper perspective and they will find out that by and large drone attacks have actually helped.