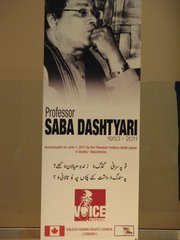 Tarek Fatah is a friend of Balochistan, author of “The Jew is not my enemy” and “Chasing a Mirage: The Tragic Illusion of an Islamic State” and founder of Canadian Muslim Congress. He sent the following speech to pay homage to Prof. Saba Dashtyari. While LUBP as a blogzine supports the federation of Pakistan, we wholeheartedly support the struggle of Baloch rights activists against the ruthless military operation which is ongoing in Balochistan since 1948.

My apologies for not being able to attend today’s event commemorating the death Prof. Saba Dashtyari, murdered in cold blood by the death squads of the Pakistan army.

I wish I could have been here tonight, but I am recovering from cancer in a hospital and am wheelchair bound.

Prof. Dashtyari is not the first Baloch killed by Pakistan as it continues its occupation of a country. Pakistan had no business entering Kalat, let alone ruling it.

Before Saba Dashtyari, thousands of other Baloch have died fighting for the freedom of Balochistan, a country and a people that have existed long before the idea of Pakistan was even a thought in the mind of the British of their agents in the Muslim League.

I am not a Baloch, but I have been your guest in Mach for a long time; I have eaten your salt and wish your desire for freedom and sovereignty; liberty and democracy; gender equality and secularism, will one day see the light of day.

The people of Punjab and Karachi who speak endlessly about the occupation of Palestine should be asked: Do you have no shame pretending to stand for freedom, but being complicit in the occupation of Balochistan? How dare you march for end of occupation elsewhere, send flotillas full of guerilla tourists, yet support the genocide being committed against the occupied Baloch people.

Ask these pseudo leftists, these sharia bolsheviks, how they explain their silence over an Azad Balochistan while singing hymms about the end of occupation thousands of miles away. As the Baloch diaspora, it is your duty to expose the hypocrisy of the Pakistani leftists in Toronto who shed no tears for the departed freedom fighters of Balochistan. 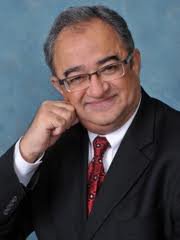 Today, as you meet, another country that was occupied in the name of Islam and Arab supremacy, has won its freedom. Today South Sudan enjoys its first day as an independent nation, free from the slavery and oppression imposed by the jihadi Islamists of Khartoum.

The freedom of Balochistan may not happen tomorrow, but one day the Baloch will be free. Long after the word ‘Pakistan’ will lie in the scrapheap of history as a product of pan-Islamism and the cold war, a free Balochistan will be alive. The day the flag of a free Balochistan flies over Kalat, men like Saba Dashtayri will be remembered as the ones who gave their lives so that future generations of Baloch could live free.

Saba will not be alone. He will be in the company of Nauroze Khan, Sheroo Marri, Akbar Bugti and scores of others killed by Pakistan in the name of Islam.

Today I salute Prof. Dashtayari and also my heroes of the past, Mir Ghaus Bux Bizenjo, the aging Khair Bux Marri, the poet Gul Khan Nasir and the countless comrades of the BSO who stood for freedom in the 60s and 70s.